Rocking the Red: Attacking a Gymkhana on a Honda Grommet 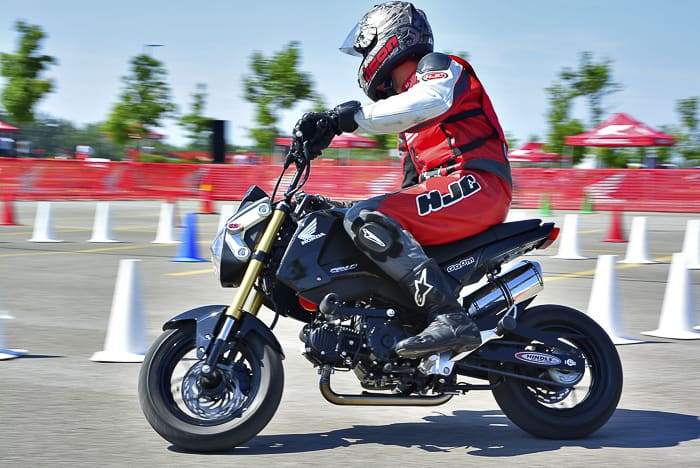 “You meet the nicest people on a Honda” isn’t just a tag line; it encapsulates an entire way of doing business. Every year, Honda Canada hosts an open house to let potential consumers and existing customers experience a wide array of their products firsthand. Rock the Red is a multi-disciplined family-focused one day event where attendees can sample everything from the motorcycles to lawn mowers in a pressure-free environment. It is a brilliant way to bring new members into the family but it is also part of what keeps dyed-in-the-wool fans coming back for more.

Gymkhana – what is it?

In addition to hosting vendors, static product displays and demo rides, Honda has incorporated a Gymkhana competition into the mix as a way to demonstrate the ability of their products and provide entertainment for spectators. Originally an equestrian event consisting of speed pattern racing and timed games for riders on horseback, Gymkhana has more recently found its way into motorsport. Likely the most well known example would be Ken Block, who has become an Internet sensation for his splashy videos featuring billowing burnouts and spectacular stunt driving. Putting your money where your mouth is.

Unlike Block’s tire-smoking exhibitions, the event I was invited to take part in was a timed competition among riders on a predetermined closed track, meant to display precise, controlled movements. Arriving first thing in the morning, our group of eager riders ranged in age, size and experience. Tackling a course we’ve never seen on bikes most of us have never ridden, the goal is to ensure an even playing field. Classes were broken up into two fields of riders who would be piloting either the CB500 or the diminutive Grom pocket bike, of which I would be riding the latter.  For the uninitiated a Grom, or Grommet, is a term once used to describe young surfers but has been expanded to include beginners in other extreme sports as well. Now you know.

Straddling the miniature Grom for the first time at the starting gate, I only had time to flick up the kickstand and give the throttle a couple short, quick twists before the Marshall started counting down, “3…2…1.”

We were then offered a selection of CBR 125s in order to get acquainted with a practice course, which we would later discover was quite different from the one we would be participating on. Quickly and completely memorizing the complex pylon course significantly contributes to a rider’s capability to achieve a high score. Having roughly the same short term memory as a gold fish, this would prove my biggest challenge as we weaved in and out of a veritable sea of plastic markers, each colour representing a different direction and specific action. Considering the fact that we would only be going fast enough to require the first two gears meant that precision was key. While it may be fun to watch, smoking rubber and sliding rear wheels, such activity scrubs off speed and this was a time trial. It was immediately evident who got the program those who went for broke found themselves on the pavement with the clock ticking. There was no shortage of carnage throughout the heats but thankfully paint and pylons were the only collateral damage. Rather than attack the course with such reckless abandon, I preferred to err on the side of caution in favour of keeping the bike’s paint and my ego intact regardless of my time.

Straddling the miniature Grom for the first time at the starting gate, I only had time to flick up the kickstand and give the throttle a couple short, quick twists before the Marshall started counting down, “3…2…1.” The 124.9cc air-cooled two-valve Single responds with an enthusiastic grumble. Engaging the light clutch and popping it into gear as the flag dropped, the eager 102kg Grom burst out of the gate. Doing my best to recall which pylons signified what, I also attempted to recall the elementary lessons my very first riding instructors instilled in me. Properly poised with my head up with my eyes focused where I wanted to go, I negotiated each turn of varying radius and difficulty methodically but with a definite sense of urgency. Handling is predictably effortless and the non-ABS braking is as good as one would presumably require with a Nissin 220mm rotor with dual piston calipers in the front and a 190mm rotor with a single piston caliper in the rear. Those who proved to be quickest struck a fine balance between tenacity and elegance which was impressive to watch. While my strategy did garner me a position in the top half of the field, it wasn’t enough to carry on beyond my heat to the finals. C’est la vie. After the trials were over, I found myself standing around with the other competitors exchanging elated, animated stories of our shared experience on the sprightly 125cc Grom. I can’t say that I would personally see a need for purchasing one myself, but that’s not to say it doesn’t serve a purpose. The fact that there were a couple dozen leather-clad grown men lining up to ride one and without exception grinning from ear to ear afterwards speaks volumes as to how much fun can be crammed into such a tiny package.