In Pictures: The 2016 Chevy Malibu Plans To Reignite the Mid-Size Sedan 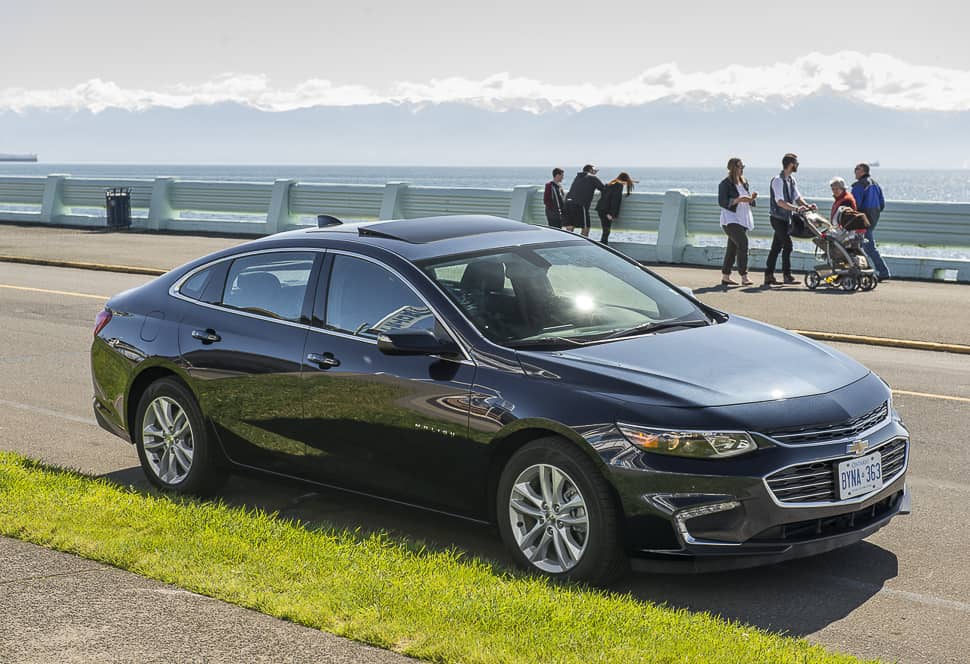 Sure, everyone’s flocking to CUVs, but the classic sedan is still relevant. The new 2016 Chevy Malibu hopes to pave new paths for the forgotten segment, adding style and an overdose on connectivity – but in a good way.

Before automakers bombarded us with small utility vehicles — from beefy yet gutless 4-cylinders to tiny, luxury crossovers priced north of $50k — we had the good old sedan. Wagons, even. But along this journey, as consumers continue clamouring to the growing small utilities as car-builders continue their unrelenting crossover push, the overlooked four-door family chariot has had a rough time appealing to the masses.*

Despite slouching sales and the faltering popularity, there’s still a place for the mid-size and full-size family four-door car in today’s market. And as automakers keep elevating their style-game, producing sexier, sportier family sedans we’ll actually drive, like the stylish new Subaru Legacy for instance (and we’re not talking 3-Series or A4 here), there’s still hope.

* In all fairness, the small utility vehicle can be a terrific choice offering decent capability at an affordable price, particularly for young (cost-conscious) families seeking that precious, extra cargo. And there’s a plethora of options to pick from.

No question, the 2016 Malibu styling is on-point with sleek lines and bold curves. But shedding 300 lbs, this new mid-size is also the lightest in its class; the body structure alone is 100 lbs lighter than the outgoing version. All this weight reduction contributes to the Malibu’s fuel economy which is also best in class.

Nine-generations later, Chevy never gave up on their tenacious little 4-door. For 2016, the Malibu is actually priced lower than previous generations, and available in 5 trims: L, LS, LT, Premier (formally the LTZ), and Hybrid. The sweet spot or volume seller will likely be the second-level LT priced around $28k-30k CDN, which is a good choice and great value.

The most connected car in it’s segment, the new Malibu is all about the onboard technology, fulfilling the needs of today’s increasingly plugged-in passenger. Considering Canadians spend 7 hours a week in their cars, all this emphasis on connectivity begins to make sense.

Wireless charging with phone cooling (a/c system built-in) is a nice addition to the 2016 Malibu as well. When the TV commercial for the 2016 Chevy Malibu recently came on, my wife asked what exactly is Teen Driver? When I explained it’s essentially a way for parents to monitor their kids driving behaviour with a summary – or report card – she said, that’s a great idea!  I’d have to agree, though our kids aren’t teenagers yet. But I once was. I rest my case.

The Malibu is the first of the Chevy products to introduce this feature. And while other automakers have introduced similar features with summaries and such, the Malibu is the first vehicle to do so with emphasis on those crazy teenagers (aka bad drivers?). But hey, it’s for their own good, and everyone’s safety.

Parents set up the menu with a secret 4-digit code; the Malibu detects the driver via key fob and monitors then reports a driving summary across various variables including distance driven, max speed reached, overspeed warnings, forward collision alerts, active ABS warnings. And if your teen doesn’t buckle up, they’ll be pissed as the audio volume is capped off at a low level. Recent introductions to the Chevy lineup are the Apple CarPlay and now Android Auto apps, offering occupants access to maps, music, and everything else across the two most popular mobile operating systems.

In the last couple years, GM introduced onboard 4G LTE Wi-Fi which is definitely a game-changer, and also offered in the new Malibu sedan with 3GB or 3-months free service with the option to subscribe to their data plans. But here’s the kicker: the plans are not cheap, currently offered at 1GB for $20, 3GB for $40, 5GB for $60, or 10GB – 12 months for $200. While it’s nice to at least have the Wi-Fi option, let’s hope the data plan prices eventually come down a bit.

The Malibu gets the popular OnStar service, including 5 years OnStar diagnostics and 5 years OnStar RemoteLink, the latter allowing you to use the app and send info to your car, likes maps, etc. Very cool. And handy.