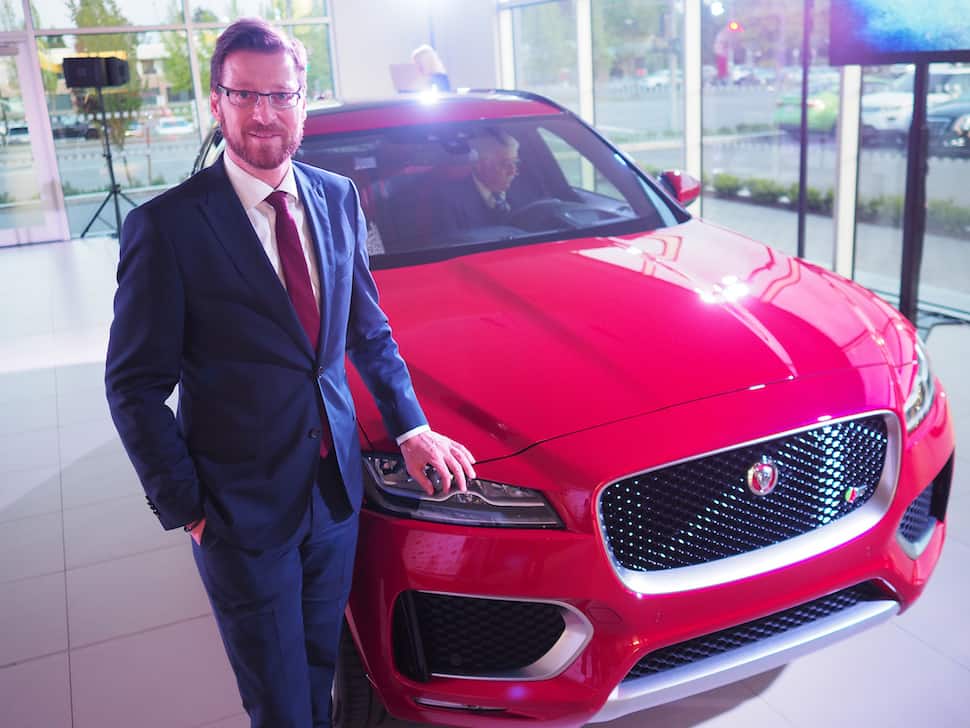 We chat with the company’s president about his new role, Jaguar’s first SUV, and his love for the E-TYPE.

Wolfgang Hoffmann has quite the resume. Before taking his recent position as president of Jaguar Land Rover Canada two months ago, he was at the helm of Audi Canada also serving as president. Prior to that, he spent some time Stateside employed as the chief operating officer of Automobili Lamborghini LLC. Earlier in May, we sat down for a chat with Hoffmann while he was in the neighbourhood attending the launch of a JLR dealership in Metro Vancouver and two brand new products: the XE sports sedan and the F-PACE, the brand’s first SUV.

TL: How are you adjusting to your new role? It’s been a couple of months?

WH: Exactly two months. I joined on the seventh of March. There’s always a learning curve as you need to understand the business, but in my case it’s easier because I know Canada, I know the luxury market and obviously I’ve always looked at Jaguar Land Rover as the competitor so I have an outside view of it.

You need to get to know your team, the strengths and weaknesses and you need to talk to the dealers to understand where their problems are. You need to understand the financials, the network, where the opportunities are and then you put your game plan together. At the moment I’m still at the listening phase, listening to my people and also trying to identify what bothers them and try wherever I can to help them.

TL: Why did JLR choose to release their first ever SUV now?

WH: Because we all realized Jaguar has a lot of brand equity, and the brand can support way more models than what we have at the moment. You could argue in each segment there could be a Jag, no? And I think of course when you do it, you have to be true to one thing: your brand’s DNA. For us, that means building sporty cars no matter if it’s an SUV or if it’s a sedan. WH: Western Canada is very important for us. Our market share for Land Rover here is much higher than in the rest of Canada. They just love SUVs in general in this region, even more than in Ontario, for example. Quebec is very important. In terms of Metro Vancouver, you have what, a population of two million, a little bit over two million and growing? It’s also a very trendy area, and some trends go across the country. That’s big for us. It’s a very good market already and therefore it’s crucial that we defend it even further.

TL: What do you drive now?

WH: I drive [an F-TYPE]. I love it. People still look at you and go “What’s that?“ It’s a great car, and if you look at the F-PACE it has so many features from the F-TYPE. For the designers to take that idea and really make an SUV out of it, I think they did a fantastic job.

> Check out our F-TYPE Reviews:

WH: I saw the E-TYPE [outside the new dealership], one of my favourite cars when I was a little boy. I had a Matchbox toy at home, an E-TYPE in white and red leather. Well, plastic (laughs). What a car with that long hood. When I see it now, oh man, I would love to have one. It’s such a beautiful car. Benjamin Yonghttps://benjamin-yong.com/
Benjamin Yong is a freelance writer and member of the Automobile Journalists Association of Canada. You can find his stories on this site and in other publications including RPM Canada, Westworld BC, CAA Magazine and Darpan Magazine.
FILED UNDER:
CultureCulture FeaturesFeaturedJaguarLand Rover

Full review of the new Defender 110 with the P400 powerplant upgrade. Sure, we take it off-road, but how does it perform on everyday roads?
Read more
Toyota

Chat with the President & CEO of Porsche Canada on the...