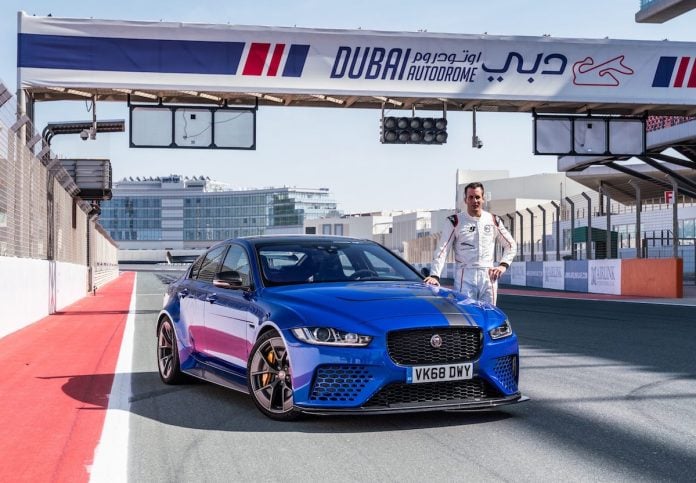 If you weren’t convinced the Jaguar XE SV Project 8’s current position as the world’s fastest saloon, well, here’s one more accolade the hand-assembled British cat adds to the resume.

Saying you’re “the fastest” is one thing. Proving it time and time again in various settings and conditions is another. And while the famed Nürburgring is the go-to global track, there are plenty of others waiting to be exploited.

“With the Jaguar XE SV Project 8, our aim is to definitively prove that it is the fastest four-door saloon in the world by setting records at several tracks around the globe under different climatic conditions and surfaces,” says Salman Sultan, Regional Public Relations and Social Media Manager.

“The Nürburgring is a well-worn test bed for manufacturers to challenge themselves against the competition but that is only one track.”

Showing up for compact sedans everywhere

With 4-door family cars taking a backseat to SUVs and crossovers, it’s nice to see the long, lost sedan tearing up the track and setting crazy records. Especially one that can hit 320 km/h and hit 100 km/h in a mere 3.7-seconds.

Picking up the kids and hauling groceries will never be so exciting. Only 300 units of this special edition XE will be produced. If a stock model will do, check out our 2020 Jaguar XE preview here, which starts at US$39,900 in the US and C$49,900 in Canada.

Amee Reehalhttp://www.ameereehal.com/
Shooting motors professionally since film was a thing, Amee's work has been published in various outlets including NBC Sports, Chicago Tribune, SuperStreet, GlobeDrive, MotorTrend, and others. He's a writer, editor at TractionLife.com, AJAC member, and full-time digital marketer at Traction Media working with national brands. Find him traveling, spending time with his kids and family. Or golfing, poorly.
FILED UNDER:
CultureJaguarAuto NewsJaguar News