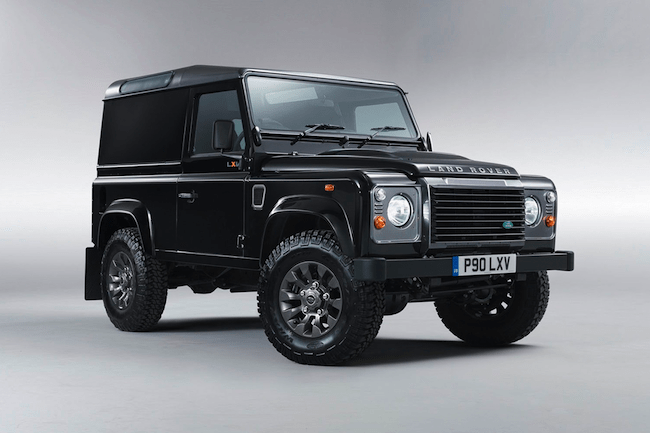 When Land Rover held their 65th birthday at Packingston Estate (the ground where their off-roading vehicles were tested, even from the very first model in 1948 through the 1970’s) there was quite the slice of birthday cake delivered by a Lynx military helicopter.

Along with this extravagant showcase and recognition of how far they’ve come there was the unveiling of the LXV special edition. For those who are unaware, LXV in Roman Numerals stands for the standard number 65.

Number it how you want, this limited edition Landy is super clean yet totally badass in all black.

Under the hood: Diesel-powered Defender

This spectacular SUV is based on one of their slightly later models, the Defender. The Defender features a 2.2L diesel engine, 6-speed manual transmission, and impeccable, but simple paint jobs coming in either white or black.

On top of the original design that it is derived from, the diesel engine also develops 120bhp and 360Nm of torque, while also being linked to a 6-speed manual.

Along with the unique and beautiful paint jobs, some real customization comes into play with orange contrast stitching in the interior, which lays so wonderfully against the gray seating. The steering wheel is bound in leather, giving great control and beautiful aesthetic feel.

Limited to only 65 units

This model is especially a significant one in that it has been limited to 65 units in the ‘Santorini Black’ model; this exhibits what a truly special and once in a lifetime opportunity there is to own one of these vehicles.