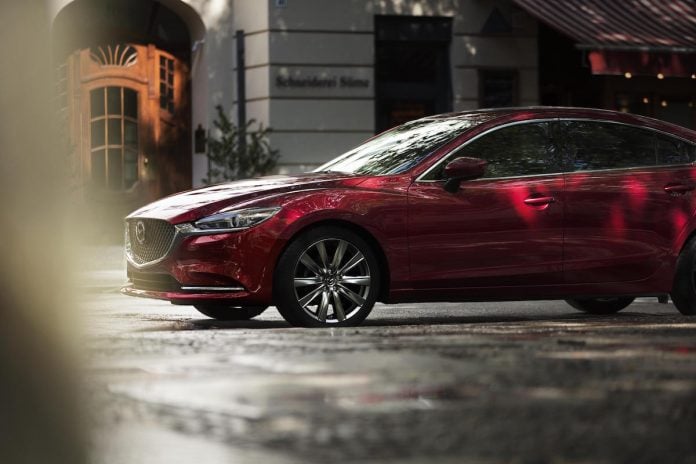 We review the top-end 2018 Mazda6 Signature family sedan with added luxury & tech to keep up with the competitors. But how does the 2.5L turbo engine perform?

In North America, Mazda has been among the automakers more reluctant to adopt turbocharging to squeeze bigger power out of smaller engines so buyers can enjoy good fuel economy without sacrificing performance. Instead, Mazda has largely relied on its SkyActiv engine and transmission technology (which has a lot to do with reducing friction) to make its cars and crossovers more efficient.

At last, Mazda’s first turbo SkyActiv engine showed up in 2016 to power the CX-9 mid-size crossover, and that 2.5L four-cylinder is now available in the Mazda6 family sedan as part of an update to that car for the 2018 model year.

Running on pricey premium fuel, this turbo engine promises 250 hp and 310 lb-ft of torque, and the horsepower number drops to just 227 on regular-grade gasoline.

Even that higher horsepower number is on the low side for a turbocharged engine of this size (today’s 2.0L turbos easily make that much), but that generous torque, which is all available from 2,000 rpm, makes this engine feel like a diesel, with strong performance in city driving. But with the bulk of the power happening at low revs, the motor feels breathless as the revs climb. Mazda acknowledges that characteristic of the engine with an automatic transmission programmed to shift well before its 6,000-rpm redline, even at full throttle.

Mazda has stuck with a six-speed transmission to go with the new turbo engine, while some of its key competitors, like the Honda Accord and Chevrolet Malibu, pair their 2.0L turbos with nine- and 10-speed transmissions that are better suited to making the most of an engine’s output.

While Mazda’s torque-rich turbo engine works well in the larger, heavier CX-9 crossover, the Mazda6 could use more high-end punch to help it keep up — literally — with the Honda Accord, and the Toyota Camry with its strong optional V6.

Mazda’s fuel consumption estimates for the new turbo engine are 10.0/7.5 L/100 km (city/highway) and our test car lived up to that promise with an average of just under 10.0 L/100 km in a week of city driving. Good sound deadening means that even when you ask the engine for maximum acceleration, its mechanical soundtrack is muted, contributing to an upscale feel that suits the nearly C$39,000 price of our tester, which was done up in a new top-end Signature trim on offer for 2018.

That new package and turbo engine are accompanied by refreshed styling inside and out. Those changes aren’t massive, but the Signature model introduces a few new upscale features like Nappa leather on the seats, ultrasuede trim on the doors and dash and a gauge cluster with a central LCD display.

Even that higher horsepower number is on the low side for a turbocharged engine of this size (today’s 2.0L turbos easily make that much), but that generous torque, which is all available from 2,000 rpm, makes this engine feel like a diesel, with strong performance in city driving.

Since this generation of Mazda6 arrived as a 2014 model, it has impressed, regardless of trim level, with an upscale driving feel and a suspension that achieves a rare combination of compliance, body control and sharp handling. What holds the Mazda6 back, when compared with cars like the Accord and Toyota Camry, is an interior on the small side for a family car that lacks the expansive rear seat space of those more popular competitors. While turbocharged performance is a welcome, if late, addition to the Mazda6, the new Signature trim makes a better first impression and does more to advance the car’s status in the family sedan field, adding the kind of luxury and technology features that are now expected even in mainstream-branded cars.

Are you shopping for a family sedan? Check out our all Sedan Reviews.