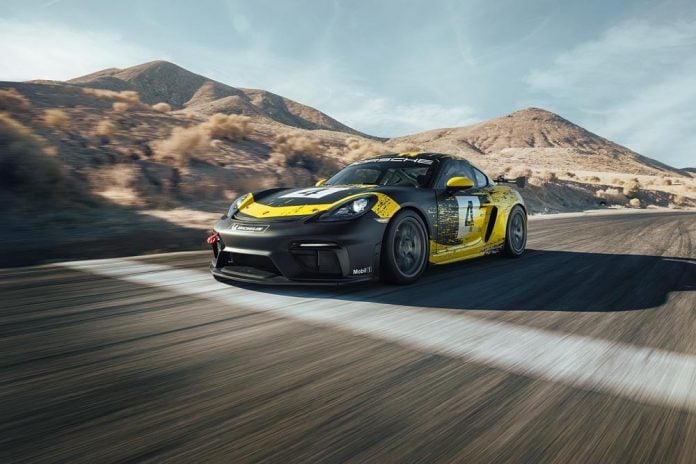 The most track-worthy 718 Cayman yet

Porsche is giving its Cayman a lot of love these days. First, with the new 718 Cayman T build for the purists released just a couple weeks ago. Now, with the new Porsche 718 Cayman GT4 Clubsport — a faster, stronger variant designed to devour the track.

The 2019 GT4 Clubsport marks the second generation of the ramped up mid-engine racer, three years since its initial debut. Powered by the 3.8L flat-six putting down 425-hp at 7,500 amp and paired to a dual-clutch gearbox, this new Cayman adds 40-hp over the outgoing Clubsport and is the first-ever production race car that gets body parts made of natural-fibre composite materials, like hemp and other agricultural by-products.

While the new 718 Cayman T is light on its feet by shedding unnecessary weight, it’s pretty clear the 718 Cayman GT4 Clubsport designed entirely to kill it on the track, available in two flavours: Trackday and Competition.

The Trackday version targets the weekend track warriors and amateur drivers looking for a out-of-the-box Cayman that’ll do the trick in the fast corners and chicanes. It sports an impressive list of track-worthy features from traction control assistance systems to a good old handheld fire-extinguisher. Best part? You can service this one at the Porsche dealership. Jacked up and ready to rock, this 2016 Jeep 4x4 off-roader by designer Igor Dmytrenko is built for action. Now, let's get Jeep to actually build one.
Read more
Motorcycles

Polaris’ three-wheeled autocycle gets its biggest update for 2020 since hitting the streets five years ago. A 25-hp increase, lighter, and improved cabin.
Read more
Adventure Vehicles

From badass camper vans & oldschool SUVs to modified pickups & adventure motorcycles, here are 30 of the best off-road vehicles we came across in 2019.
Read more