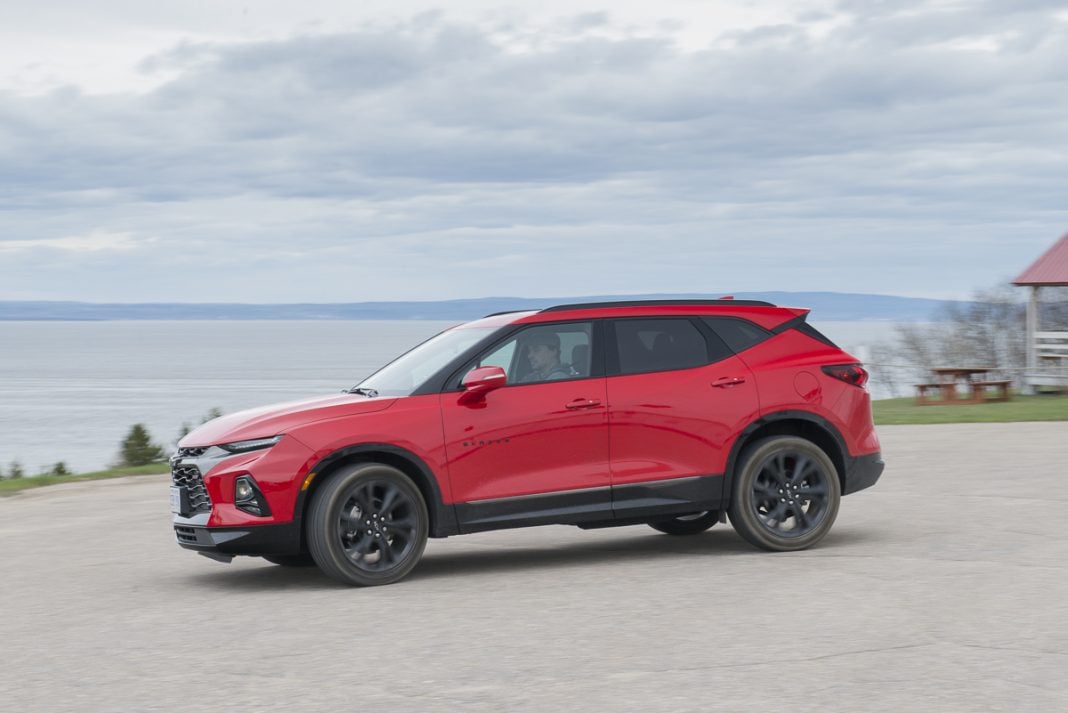 Quebec City, QC – Don’t get me started on car companies slapping the ‘sporty’ moniker to their products, including SUVs and crossovers, when about 90% of the time there’s absolutely nothing sporty going on aside from a badge and some vanity upgrades.

(Similar to the new, confusing trend of “adventure-ready!!” sport utilities shot in the mountains with sexy roof racks up top and gutless engines under the hood).

It’s cheesy, inaccurate, and above all, a bit misleading for consumers truly expecting sport-tuned suspensions and performance upgrades to go along with low slung hoods and “sporty LED headlamps.”

The new 2019 Chevy Blazer, which made its world debut almost a year ago, is making that same claim – “a sporty mid-size SUV.” But unlike the others, this 5-passenger, 2-row hauler actually gets a sport-tuned suspension, a respectable 3.6L V6 powerplant, and optional 21-inch wheels to go with its athletic look.

That warrants a proper check in the sporty SUV column, in our books. Only thing missing? A badass Blazer SS with say the new Camaro’s 455-hp V8. But that’s another story.

Up close with the Blazer RS: Part 1 and Part 2

We reviewed the new 2019 Chevy Blazer in San Diego back in February, before it officially hit the market. So definitely check out that full review here.

Here, however, we’re taking a closer look at the sportier RS trim.

The new Blazer comes in three trims: the entry-level LT (though you won’t see the ‘LT’ badging on the SUV, just ‘Blazer’), the top-level Blazer Premier with a touch of luxury including generous chrome treatment on the outside and quality accented leather interior treatment.

Right in the middle, we’ve got the bolder, Camaro-inspired RS. Chevy tells me the volume seller will be the LT with upgrades and options. But for consumers seeking something spicier, it’s the Blazer RS that’ll fit the bill.

Sometimes less is more, and Chevy has nailed it with just 3 trim levels, which they accurately state offers “three distinct personalities.” You’ve got the good old base model, the upscale model, and a sporty model that’s actually sporty.

That pretty much covers it for most consumers, without throwing a bunch of other unnecessary trims into the mix.

Inside the new Blazer

Across the board, Chevy gave its new Blazer a more driver-centric interior which works well for the new SUV entry.

Some of the key features include an impressive 1,818 litres with the rear seats folded; a rail-based system allowing the space to be configured and blocked off as needed to secure items; a hands-free power liftgate with a light that shines a Chevy emblem on the ground to show you where to swing your foot; rear seats that slide forward to allow more cargo space and tilts back to allow extra headroom; plus, all the latest in tech including Chevrolet’s updated Infotainment 3 system with 8.0-inch touchscreen, and Android Auto and Apple CarPlay compatibility.

Here’s a shortlist of what’s available:

This trim steps it up with red accents throughout, including perforated leather seats with subtle red stitching. Expect more RS badging as well. The huge, round air vents which appear to be ripped out of a Camaro (in a good way) get a red trim which really stands out, sitting front and centre below the touchscreen on the centre stack.

Sure, the Camaro SUV moniker is played out by now, but really, Chevy’s new 5-passenger hauler does indeed look like the sport utility twin of the popular muscle car, flossing a sportier, black on black design paired to those sharp edges and massive, menacing front grille treatment.

While the RS certainly looks bolder, all models look sleek with the wider stance, strong grille, athletic hood and body lines. However, up front, the first thing you’ll notice is the Chevrolet-first separate headlamps and LED daytime running lights.

Both the Blazer RS and Premier get 18-inch wheels as standard, with 21-inch optional.

We spent time with the 2019 Blazer RS in red which looks super sharp in contrast to all that black. But we got a glimpse of totally blacked-out RS as well – from the black Chevy bowtie logos and black wheels to the dark paint – lending it a more diabolical attitude which suits it just fine.

It’s hard not to imagine a burly V8 powering this mid-size hauler – say the 455-hp V8 under the hood of new 2020 Camaro SS. Buy hey, maybe a Blazer SS is in the works. Make it happen Chevy, make it happen.

We didn’t drive the 2.5L-powered Blazer but can confidently say you’ll want to stick with the 3.6L, mating appropriate power with the SUV’s beefy look. Add the advanced twin-clutch AWD system for increased dynamics and safety.

Best part: unlike some competitors, Chevy isn’t just slapping the ‘sporty’ moniker to the Blazer RS, they’ve actually tuned it appropriately to back up the claim. Don’t expect a track beast with insane handling; do expect enough upgrades to please the average Joe seeking a more planted driving experience without compromising everyday comfort.

While all Blazers see a wider track suspension for improved stability for cornering, the RS steps it up with sport-tuned dampers: the front struts get 40% more compression control, while rear shocks a 15% bump.

As we said in our original Blazer review, “The sporty RS also has high rate suspension springs, heavy stabilizer bars, sport-turned dampers and oversized shock absorbers. Although a relatively tall vehicle, the clever engineers have made this SUV feel very sportscar-like.”

Takeaway: is the new Blazer worth it?

As the SUV and crossover market continues to get flooded with new entries every year, the new Blazer RS does a great job differentiating itself for consumers seeking a truly sportier, bolder sport utility.

With just over 300-hp, this isn’t a beast, nor should it be, but the RS’ sport-tuned suspension offers improved driving dynamics to go with the already widened track suspension. So for everyday driving, it’s just enough.

The styling is onpoint, too, and you can’t go wrong with a black on black look especially in red. The frontend looks bold and sleek, especially with the slim headlamp and daylight running light split design.

Of course, as completely new mid-size SUV model you’re getting the latest tech and connectivity as well, including the optional rear view camera which turned out to be more useful and less gimmicky than expected.

Overall, Chevy has done a great job with the new Blazer, offering it only 3 trims that pretty much cover all the bases, with the RS ramping it up just enough to be sporty without going too far.

…a Chevy Blazer SS, on the other hand, would definitely be going too far, but we’re ok with that. 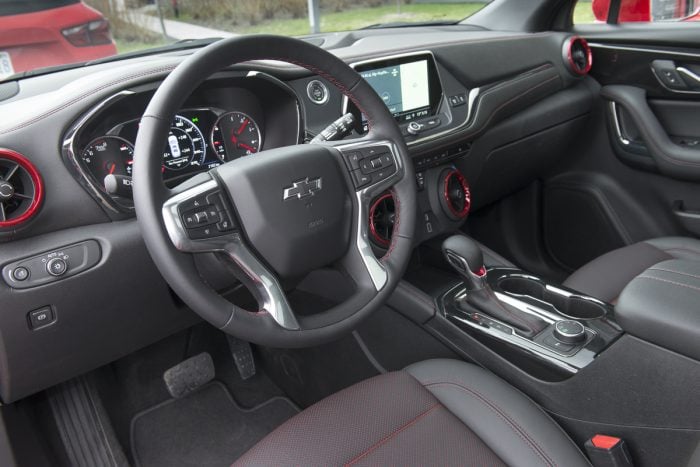 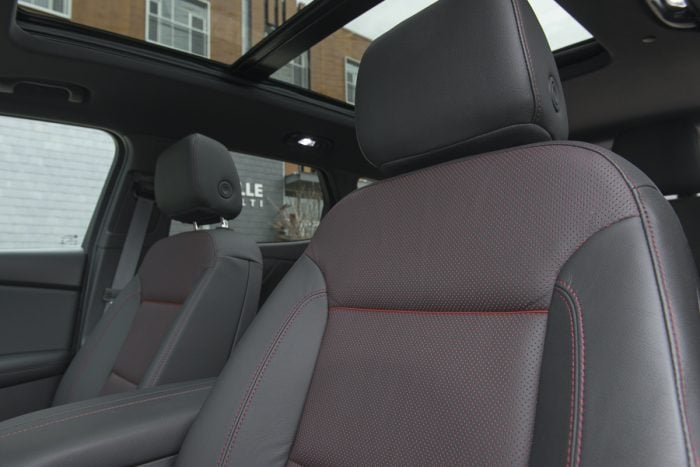 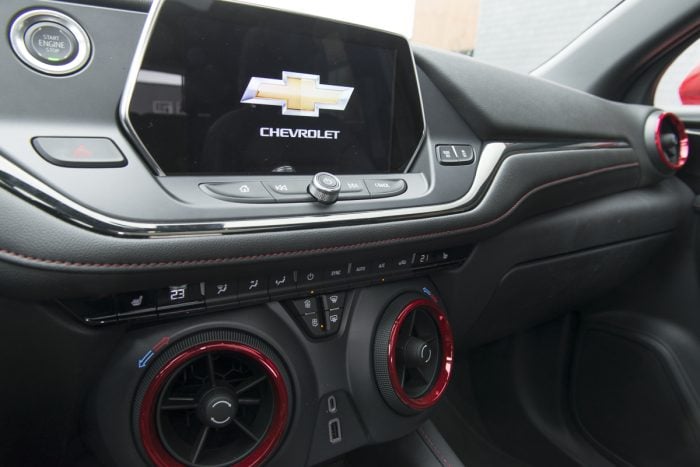 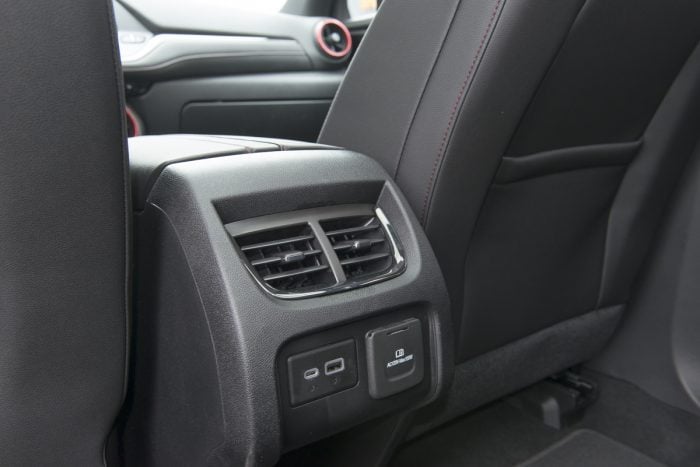 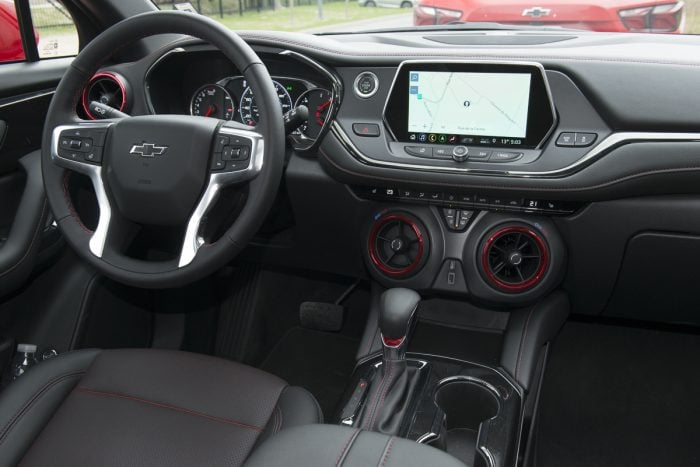 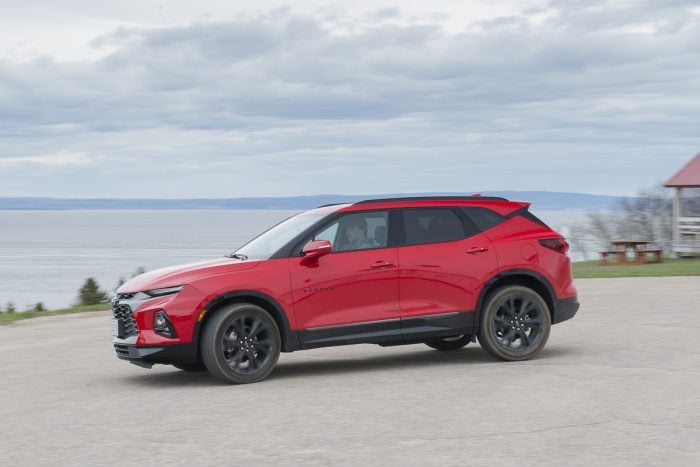 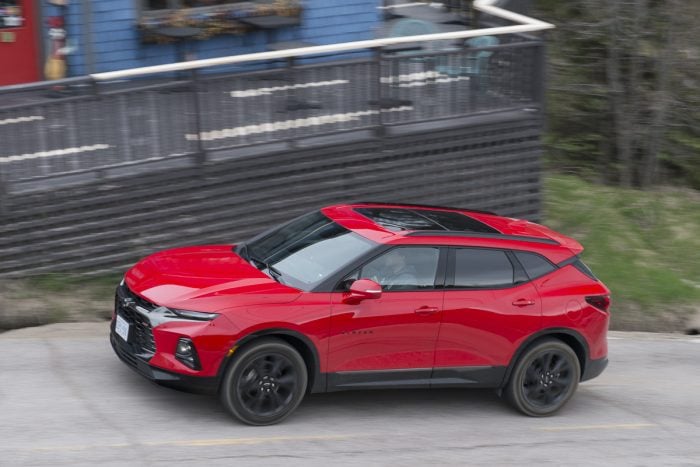 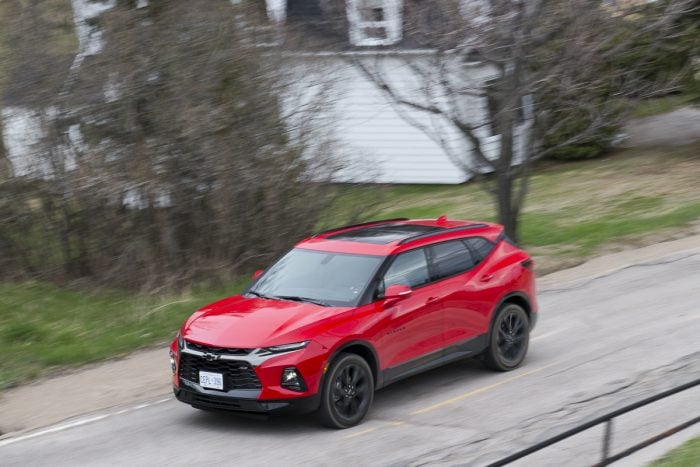 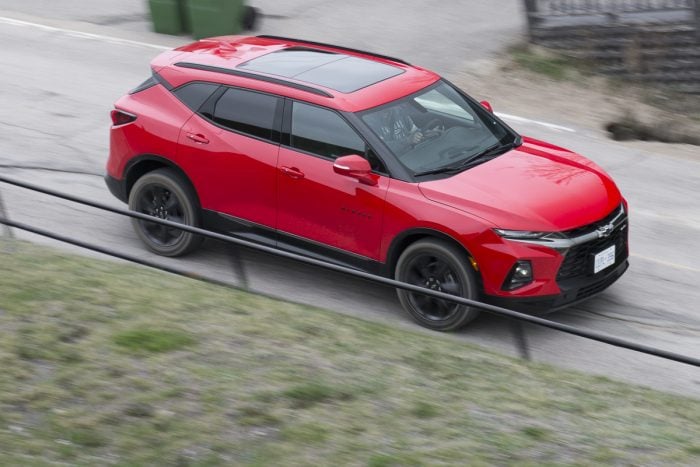 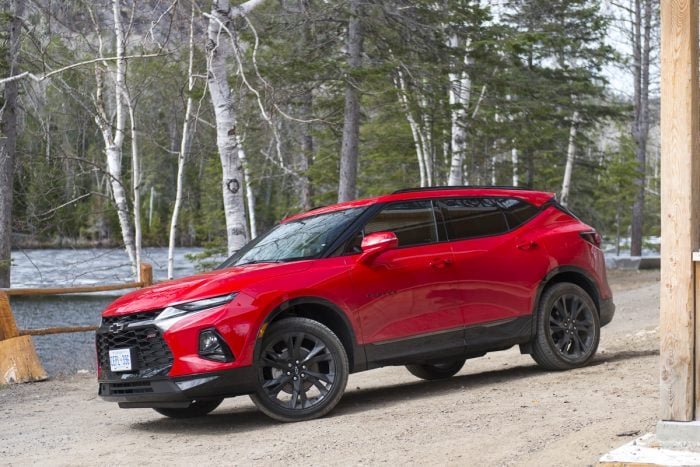 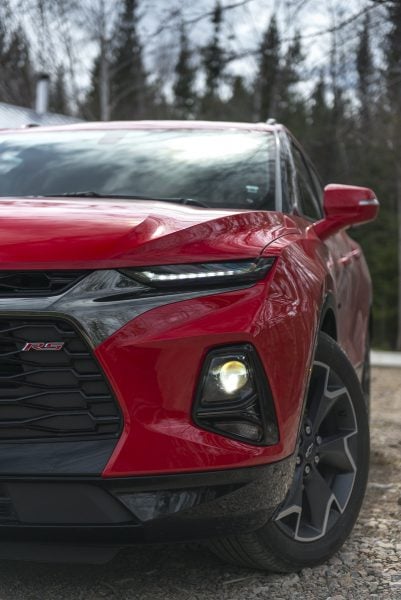 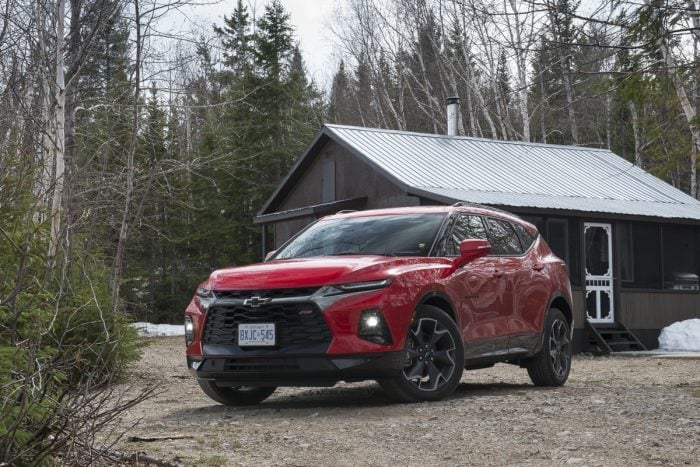 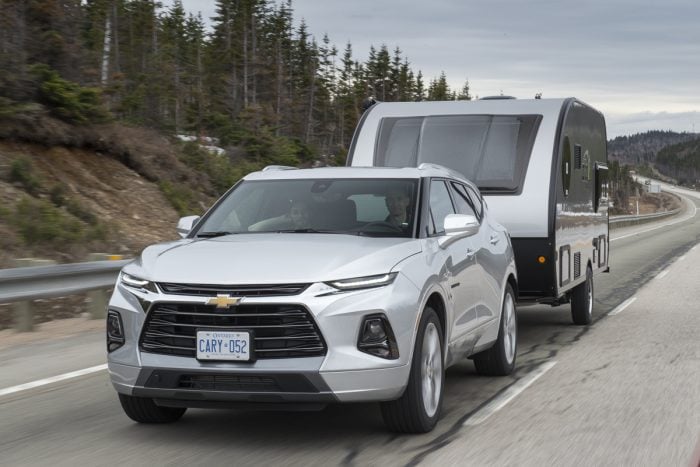