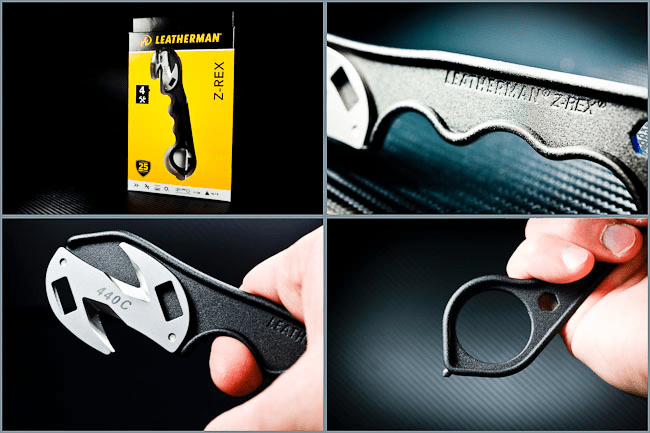 An emergency multi-tool fit for first responders: The Leatherman Z-Rex now available to the masses.

A simple drive home can easily turn into a nightmare situation. This isn’t some crappy scaremonger article that the media love to churn out – it’s fact. Just imagine you’re coming home from work in wintertime, radio on, looking forward to seeing your family, some good food, decent beer and some T.V. chill time.

The next thing you know, your pick-up truck hits black ice on a bend and you spin uncontrollably, hitting a curb and flipping over. You wake up to smoke and heat and naturally you instantly panic. Your safety belt holds you locked in place upside down (better than smashing your head sideways into the door window), the sheer weight of your body making it hard to undo the belt. You scrabble to grab the door handle to open it and get some air in, but it’s bent and stuck with the window up. What now?…

That’s a horrible situation to be in, but it does happen regularly and whether it’s a river your car has gone into, or it’s caught on fire, you need a way of escape, and fast. Enter the Leatherman Z-Rex.

This completely brilliant bit of kit should be in every driver’s vehicle. Just as some carry a small fire extinguisher or a torch, the Z-Rex should be included too. It is purpose-designed as a safety tool for both the emergency services and the public.

Leatherman is massively popular around the work for its excellent knives and multi-tools and this is just as well made and designed. It’s made from aluminium and weights in at just 1.56 oz (44 grams). At 6.75 inches it’s slimmer than an average ballpoint pen and only a tiny bit longer too, making it very stowable.

The Z-Rex is said like the monster chewer T-Rex, and there’s a reason for that. At one end is an ultra-sharp ‘V-notch’ blade capable of cutting through a safety-belt like a hot knife through butter. We tested it on webbing material two times thicker than seatbelt material, and it went though with ease. The blade is reversible and replaceable so just flip it round or replace when one edge gets blunt.

At one end is an ultra-sharp ‘V-notch’ blade capable of cutting through a safety-belt like a hot knife through butter.

That’s your seatbelt cut then, so how do you get out now that door is jammed the electrics are gone? Through the window! At the other end of the Z-Rex is a Tungsten Carbite point, something that is three times stiffer than steel and far denser than that and Titanium. It makes smashing the glass easy and you have to put only a small amount of energy into doing so – something good if you’re injured.

I tested a Tungsten-Carbide tipped breaker some years ago and with a tool less ergonomically-designed for the hand, smashed the entire rear windscreen of a car with one quick blow to it. The Leatherman Z-Rex is really comfortable to hold as it has deep grooves for the finger to sit in.

Video’s of the Z-Rex action show just how effective both the V-Cutter and Tungsten Carbide tip really are. Check out the one included in this review from Leatherman themselves:

A video of the Leatherman Z-Rex in action:

Included other features on the Leatherman Z-Rex are mainly for use by emergency workers such as firefighters, and are the two wrenches for oxygen connectors (rectangle and Hex).

The Z-Rex also comes boxed with strong and tough webbing-material holster with belt loops for belts or straps.

Any negatives? Two things; the Z-rex really should have the option of a bright fluorescent colour such as orange, yellow or green,  so that you can see it easier in an emergency situation, and it should also have some way of mounting it securely within a vehicle too – a car-mount kit from Leatherman would be good.

Overall, a simplistic but brilliant piece of kit. I’ll be keeping the Leatherman Z-Rex in my car from now on too, as you never know what’s around the corner.

A good-looking hiking boot that doubles as an everyday shoe, the Forsake Hiker might be built for adventure and travel but it looks good with a pair of jeans too in the all black look.
Read more