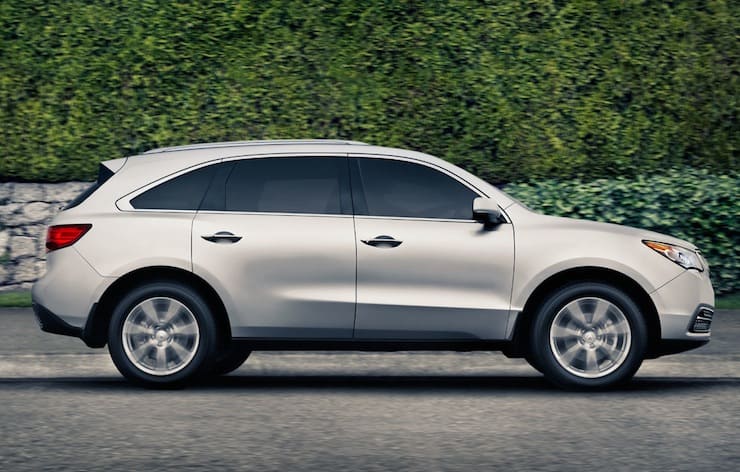 After a big overhaul last year, the 2015 Acura MDX remains virtually untouched as the automaker hopes their SUV continues to pull in big numbers in the Canadian market.

The Acura MDX has been a top-selling luxury SUV since entering the Canadian market as a 2001 model. And, at first glance, its chart-topping status makes a lot of sense: this vehicle speaks to Canadians. Aside from the fact it’s made at the plant in Alliston, Ontario, the Acura MDX is a seven-seat SUV that’s capable of tackling snowy winters, hauling everything from drywall to several hockey bags and it’s stylish without being flashy. On paper it’s the ideal vehicle for families who need extra space and can afford a little bit of luxury. I was unimpressed with the Acura ILX’s interior. It lacked personality. The 2015 Acura MDX interior is similar—materials, navigation screen, HVAC controls—but feels very different. It’s better. Much better. Maybe it’s because we’re dealing with a large, seven-seat SUV, and the setup has more space to breathe. Or maybe it’s due to some of the differences: the touch-screen eliminates a lot of the dull, black buttons; the volume-track wheel and rocker control on the steering wheel perfectly combines functions; the big, comfy, centre console. Whatever it is, it works well in the MDX.

What doesn’t work so well, though, is the aforementioned touch-screen. While it eliminates buttons, it increases frustration. I found that I had to hit the screen just right for it register my command. Or, simple functions, like turning on the heated seat, required a number of steps to dig through a series of menus, rather than a switch or dial that most other vehicles use. As with many three-row vehicles, the back bench lacks the comfort and space of the first two rows. But, overall, it’s totally fine for rides within the city. When you’re taking a longer trip and need extra space for luggage, the back row folds down in a cinch. And the second row adjusts fore and aft, providing less or more legroom as needed. It’s a great setup that speaks to the numerous needs of a growing family. While performance probably isn’t the first reason to shop for an SUV, it certainly plays a factor in the MDX’s sales. This big guy is powered by a 3.5L, six-cylinder engine that’s capable of 290 HP. When on the road, regardless if it’s city or highway, it feels more like a sedan than a bulky SUV. The only time it felt really big was when I reversed into a parking spot. The ride is quite refined for its size and little features like its Jewel Eye LED lights make it incredibly easy to see at night. If its price isn’t an issue, than the 2015 Acura MDX is nearly perfect for a family that needs the space and wants some luxury. The Elite model isn’t necessary, since lower trims offer enough features to keep most people happy. And, while it’s handsomely designed, it isn’t a flashy vehicle—something that may entice those who don’t want to be turning heads on the road.

Travis Persaud
Travis Persaud has contributed to a number of magazines across North America, including enRoute and Exclaim! He loves variety and it shows in the wide range of topics he’s covered: automotive to music, technology to travel, beer to real estate. He’s currently the editor of WHERE Ottawa (city travel guide), beer columnist for Ottawa Magazine, a frequent contributor to CAA Magazine and the former associate editor of Zoomer Magazine.
FILED UNDER:
SUV and Crossover Reviews2015 SUV and Crossover ReviewsAcuraCar ReviewsAcura ReviewsNew Cars

What's the difference between the Telluride and Sorento SUVs? Kia's two big sport utiities offer cargo, capability, and tech but are not alike in many ways.
Read more
Acura

Next-gen SUV wagon with nothing to prove. The 2019 Subaru Forester gets new engine & more space to cement position as capable alternative to mainstream SUVs.
Read more
2018 SUV and Crossover Reviews