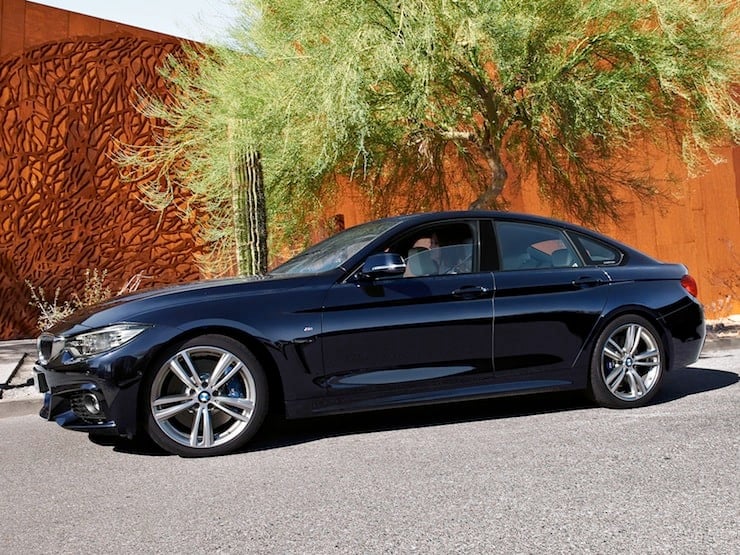 So, you really dig the look of the BMW 4 Series, which is really a two-door 3 Series, but need an extra pair of doors? Then you might want to know about the 4 Series Gran Coupé. See, where the 3 Series is just a bit too sedan-like to truly be cool, the 4 Series GranCoupé blends the coupe’s rakish roofline and stubby trunk lid with a pair of doors for the rear seat.

At this point, many of you are thinking “So it’s a sedan. What’s the big deal?”

Also distinguishing itself from the sedan is the hatch-style rear door that opens wide to provide a gaping access to the cargo space. It doesn’t necessarily grow the cargo space, but it does make getting stuff into it easier, particularly if you have folded the rear seats. Don’t buy the distinction? That’s OK. No shame in liking the sedan, since BMW wants to sell those, too.

Attached to the hatchback door is a cargo cover that extends to the rear seatbacks to keep your stuff out of sight.

…the stiffer suspension setting can make the car a bit skittish around a bumpy turn, but it offers loads of grip and very precise steering input.

An axiom that has long gone by the wayside used to say that if you could afford it, you could afford the gas to run it. And while that may still be true, even people who can afford it don’t want to afford the gas. So now, even BMW, Mercedes-Benz, Porsche and other carmakers building cars for people with more money than most drivers are keenly focused on fuel economy.

The 4-Series is no exception. BMW employs a number of technologies to reduce fuel consumption, starting with direct injection, double-VANOS valve-timing technology, VALVETRONIC valve-lifting technology (instead of a throttle plate, the engine varies the amount of valve lift to vary the power generated by the engine), a twin-scroll turbo (TwinPower Turbo is not to be confused with Twin Turbo) that provides substantial boost under hard acceleration but less or none at cruising and an auto-stop feature that, under the right circumstances, shuts off the engine when stopped at a light and instantly restarts it when you’re ready to go. Another feature in BMWs is regenerative braking. While this is typically a feature for hybrids, BMW is also using the otherwise-lost kinetic energy of braking to charge the battery. This allows the alternator to reduce its load on the engine, helping not only to save fuel but also to help the engine deliver all its power to acceleration at times. The alternator will kick in when needed to make up for what the regen braking may lack.

Having driven the four-cylinder as installed in the 3 Series, I would lean toward the six. Not because the four isn’t powerful enough: That 241 horsepower also comes with the kick of 258 pound-feet of torque. It is plenty creditable as a BMW mill. It just doesn’t sound like it. But the inline six has a very pleasing, very throaty exhaust note. You wouldn’t necessarily be wrong in opting to save the $10,000 difference between engines, just go in with your eyes, or make that ears, open.

What I do miss in the 4 Series GranCoupé, however, is BMW’s fantastic manual transmission. While you can get the stick in a coupe and in the 428i without xDrive, you can’t get it with a stick or with all-wheel drive. BMW makes an exceptionally fun-to-drive stick that snicks through the gears with Germanic precision, so it’s unfortunate it’s not here.

Perhaps to make up for it, on the tester, at least, the eight-speed automatic offers a launch-control mode: put the car into Sport+, the shifter into S, your left foot on the brake and your right foot briefly flooring the gas and holding at 2,000 rpm. Take your left foot off the brake while the checkered flag is showing and the car automatically provides an optimal launch. This isn’t something you should do during break-in, nor is it something you should do very often: According to the manual, it does stress the car considerably.

Some interesting features: turn the car off and the engine will stop, but everything else remains on until you get out and lock the car. Both turn-signal and wiper stalks operate without hard detents. To lane-change, take the turn-signal stalk to the first detent but not past it. You’ll get three flashes. For turns, push the stalk past the first detent: the signal will stay on until cancelled by the wheel, but the stalk returns to the centre position. Same with the wiper stalk: one push up turns the wipers on to the first speed, pushing up twice selects the faster speed. Both times, the stalk returns to centre. (Push down for a mist sweep of the wipers.) Also of note are the sport and comfort settings to the left of the gear shifter. Eco, Eco Pro, Comfort, Sport and Sport+ are your choices. This control varies not only engine throttle mapping (very relaxed in Eco and Eco Pro, somewhat less relaxed in Comfort and very direct in Sport and Sport+), it also varies suspension settings between soft and floaty in the first three and very stiff and very responsive, perhaps too stiff and too responsive, in Sport and Sport+.  Sport+ reduces the intervention of the electronic stability nannies, and you can turn them off altogether.

Sport and Sport+ provide the stiffest of two suspension settings:  the stiffer setting can make the car a bit skittish around a bumpy turn, but it offers loads of grip and very precise steering input. Steering is also aided by variable rate steering, which dials in larger amounts of steering relative to the turning of the steering wheel at high angles, such as for parking or emergency swerves, and less steering for lower angles, such as winding roads or lane changes. Best of all, even though it’s electric, the steering feedback remains excellent. There’s no video-game feeling here.

Kelly Taylor
Kelly Taylor has been writing about cars since 2000. His favourite ride has been the Audi R8 from Thunder Bay to Winnipeg, where he nearly traded the car for a Ford Ranger, a Greyhound Bus and the Blue Heron Gift Store in Kenora, Ont.
FILED UNDER:
BMWBMW 4 SeriesBMW ReviewsBMW 4 Series ReviewsCar ReviewsNew CarsSedan Reviews