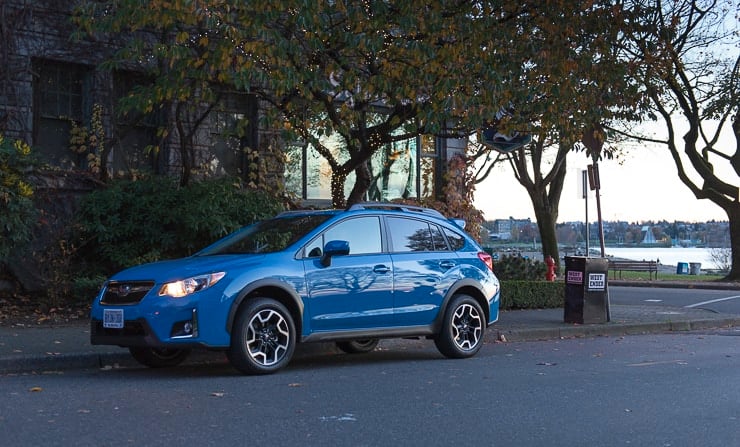 Vancouver, BC – When Subaru first introduced their subcompact utility XV Crosstrek three years ago as a 2013 model (now simply called the Crosstrek in North America), the only real crossover competitors were the 2011 Nissan Juke and the 2010 Mitsubishi RVR – one offers a totally polarizing (confusing) design while the other is reliable but a bit out of touch with the market, lacking the features consumers seek today: connectivity, a more stylized and comfortable cabin, and so on. Even in today’s crowded small utility segment, the 2016 Subaru Crosstrek wins on styling, updated cabin, cargo – plus that undisputed all-wheel drive system. That’s the kicker.

Since the Crosstrek debut, the crossover and small utility vehicle market has exploded as consumers continually seek affordable, well-rounded vehicles with ample cargo, veering away from the conventional sedans and midsize SUVs. And nearly all automakers from the volume builders to the luxury brands are playing in this lucrative segment introducing new models almost annually, including the new 2016 Honda HRV, the 2016 Lincoln MKC, and 2015 Jeep Renegade to name a few.

For 2016, the Crosstrek gets a minor cosmetic facelift while adding several cabin modifications; all things to elevate the crossover’s level of quality while simply keeping things fresh. And above all, help the Japanese brand attract an entirely new group of buyers who will eventually get into other Subaru products down the road, like the Forester SUV or Outback utility wagon.

The facelifted 2016 Subaru Crosstrek gets minor changes but enough to make an impact, adding a more premium, intuitive feel to the cabin and more sportier, stylish upgrades to the exterior design.

The overall Crosstrek styling is rugged yet stylish and remains so for 2016. And no big black plastic fender in the rear like some of its competitors, giving this crossover a little more of a higher-quality feel. And from some angles, to me anyway, looks like a mini 2016 Outback sibling, which is great if you’re a fan of the Outback styling.

Nearly all of the major changes to the 2016 Crosstrek are found at the front, where the rear styling is virtually unchanged. The front grille is now wider and more aggressive – the hexagon grille and wing were changed to a sharper and sportier design; the L-shaped chrome plating accent is added to the fog lamp while the surrounding bumper is redesigned; and the painted area around the headlamp sees minor modification, which extends the Subaru motif throughout the lineup.

Not fond of the popular orange Crosstrek colour? Don’t worry, there are other options including the new Hyper Blue (sounds better than Baby Blue, which is what it is) also new for 2016. The wheels are also modified, with a more angular design of the outgoing version adding a sportier feel; the wheels also get updated colour centre caps.

Subaru introduced a significant and much needed audio/infotainment upgrade last year with a completely new interface and 7-inch screen head unit with navigation. Fortunately, the small Crosstrek gets in on the action. For 2016, the system adds Siri connectivity with eyes free compatibility for safer use of the services.

All other changes inside the 2016 Subaru Crosstrek cabin are minor but add a good dose of quality and a premium feel. This includes a new silver and black high gloss trim above the glove compartment; the shift boot is modified with added orange highlights, plus orange highlights throughout the cabin which includes orange stitching. Small details that make a significant overall impact.

The steering wheel is upgraded with more intuitive controls, the armrest now finds soft touch materials, and the seats get new design elements as well.

Performance: how does the 2016 Crosstrek handle?

When you buy a Subaru, you’re getting proven reliability with huge emphasis on safety – fortunately, the sub-$30k Crosstrek is no exception. And that’s what ultimately sets this crossover apart from the pack. Aside from the stellar all-wheel drive system, the compact 2016 Subaru Crosstrek gets not-so-compact ground clearance, 220mm to be exact. More than enough to traverse urban parking lot debris like tires (you never know) or small tree trunks and small animals (you never know) in the Great Outdoors.

We had a chance to put the new Crosstrek through the paces in various outdoor situations from steep inclines/declines to fairly deep water puddles. We also did some slaloms on a makeshift track in a movie theatre parking lot. The Crosstrek handled it all with ease, and to be frank, I wouldn’t feel as comfortable doing any of this behind the wheel of most of the competing crossovers. The asymmetrical all-wheel drive kicks in when needed, the transmission is responsive – both on the highway and off-road – and overall provides sporty enough driving performance for a product at this price-point. Excluding the hybrid version, the 2016 Subaru Crosstrek also offers a respectable 1500 lb towing capacity. 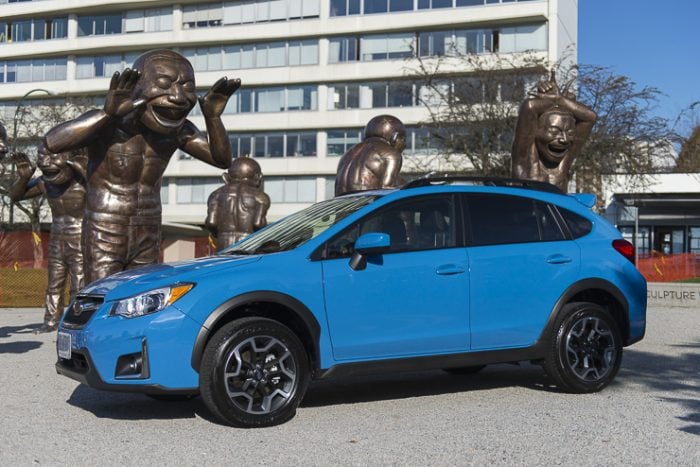 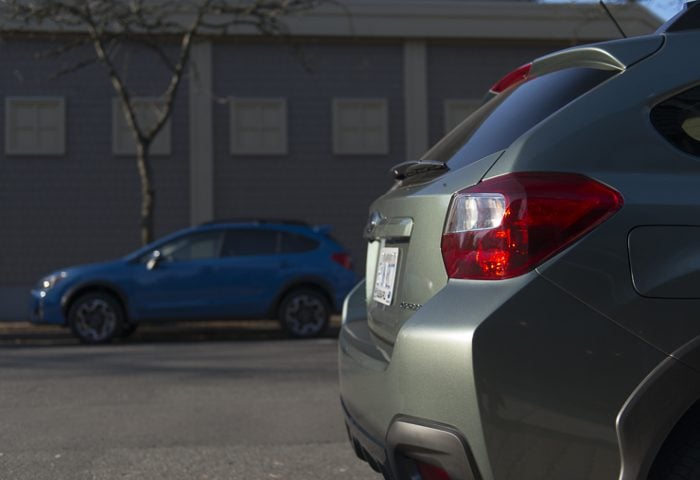 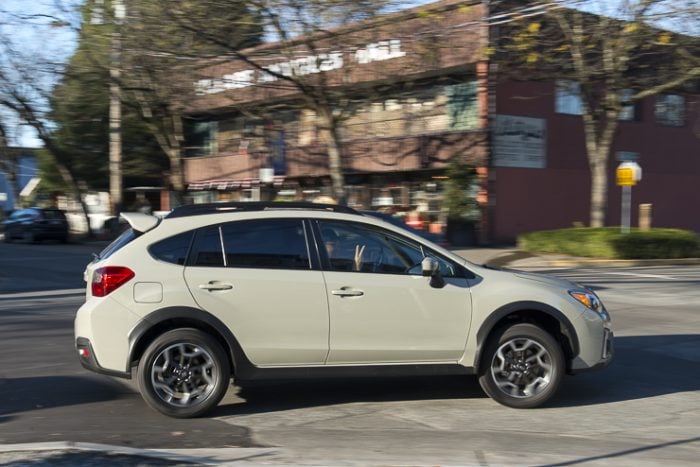 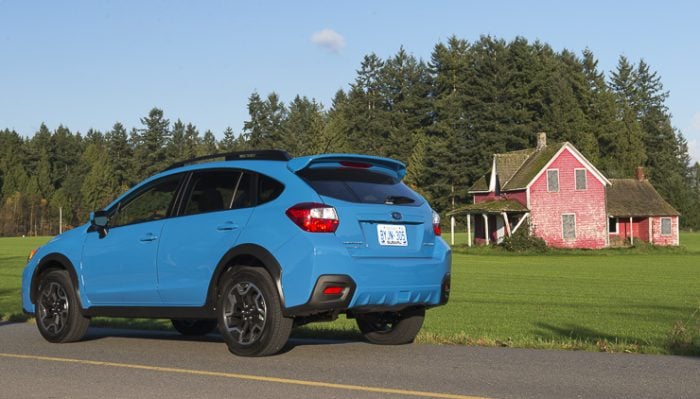 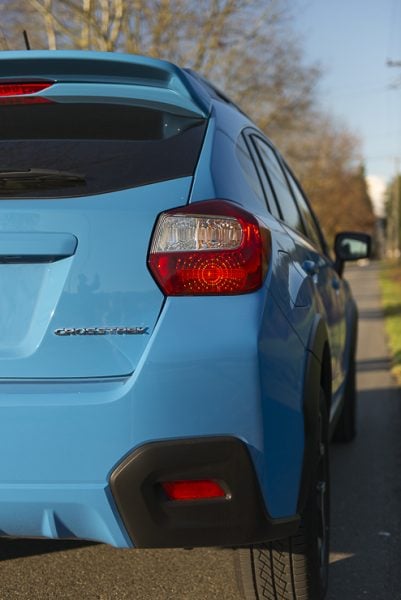 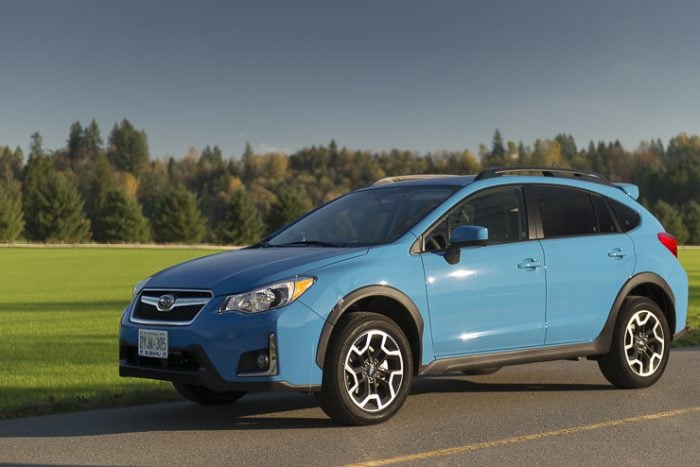 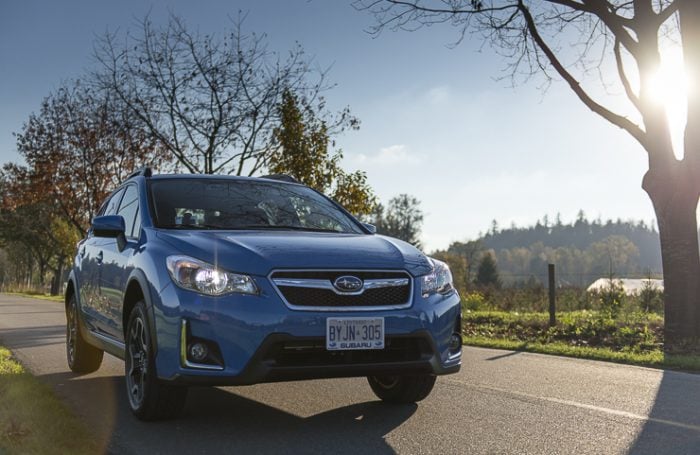 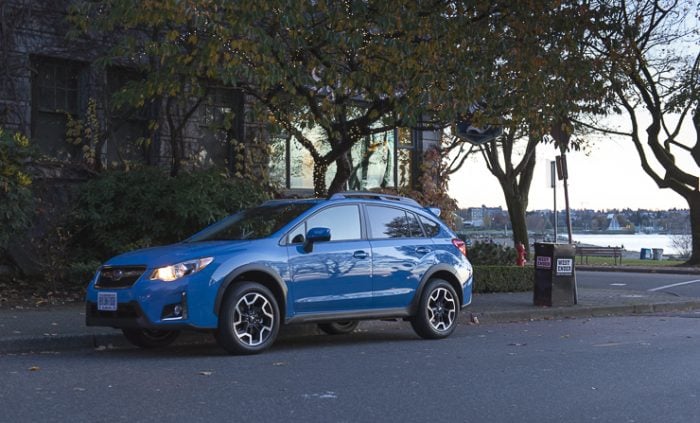 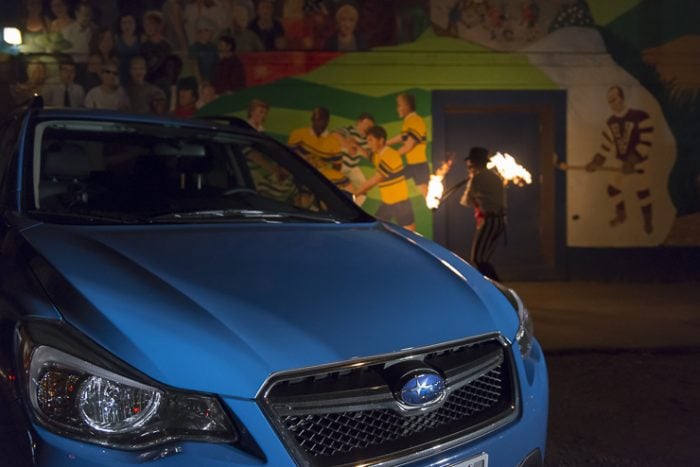 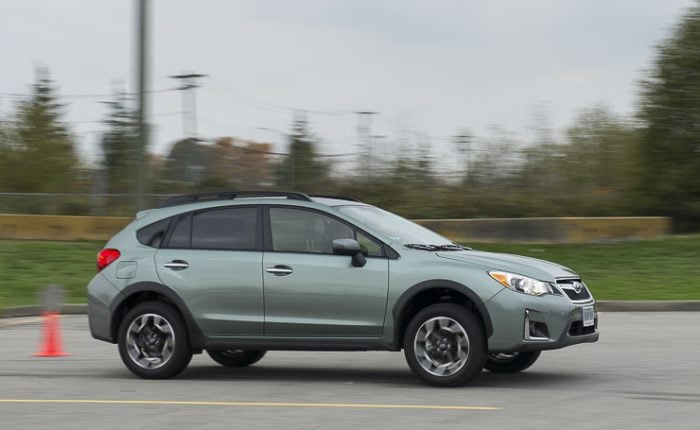 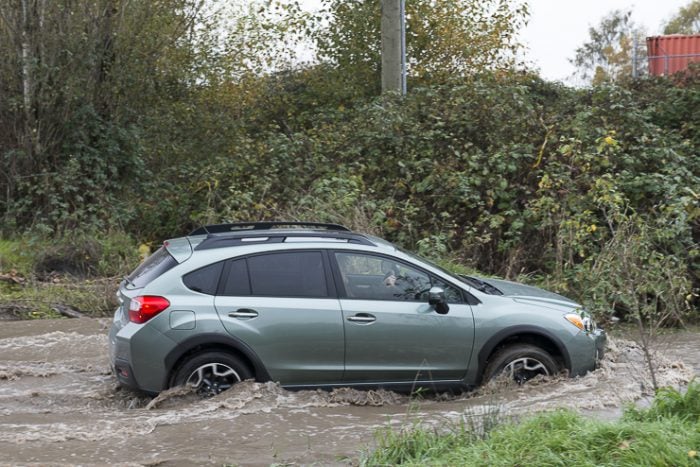 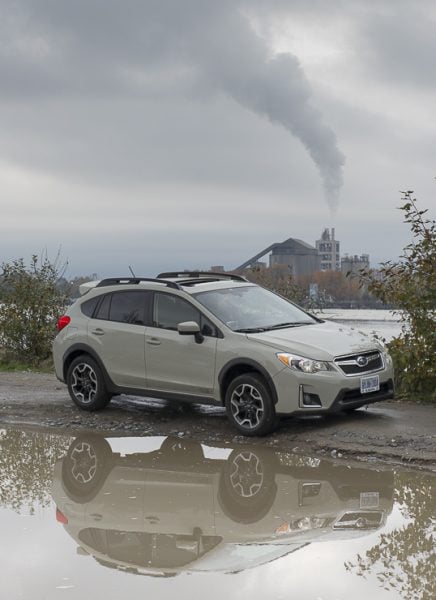