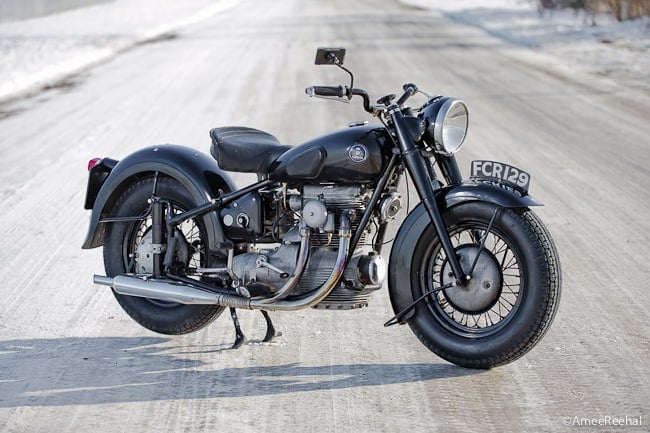 Jim Kelsall came across an auction site that listed a barn-find 1947 Sunbeam S7 coming up for sale on the Isle of Wight. He phoned the auctioneer and placed a proxy bid – and won.

Catching a glimpse of a Sunbeam motorcycle moving down the asphalt is a rare experience, especially in Canada.

A product of the British manufacturing industry, there are two distinct periods of Sunbeam motorcycle production. The first was from 1912 to 1939, and the second from 1946 to 1957. John Marston of Wolverhampton, England first produced fine quality bicycles in the late 1800s, and these pedal-powered conveyances bore the Sunbeam badge. Mechanized transport caught Marston’s attention at the turn of the last century, but rather than pursuing motorcycle construction he developed automobiles, and set up the Sunbeam Motor Car Co. Ltd. Robert Gordon Champ wrote in his Sunbeam S7 and S8 Super Profile book (Haynes Publishing, 1983): “Although the motorcycle should have been the logical step from the cycle, Marston disliked the frantic antics inseparable from the primitive, clutchless single-speeders of the day, refusing to make a motorcycle at all unless it could be ridden in a gentlemanly fashion.”

In 1912 Marston produced a motorcycle of which he could be proud, this one fitted with a 2 3/4 horsepower single cylinder side valve engine and fully enclosed chain drive. Sunbeam machines were generally lightweight, and a range of side valve and overhead valve singles were the company’s mainstay. The motorcycles were worthy competitors and Sunbeam-mounted riders took many wins in a variety of events, not the least of which was the Isle of Man TT races in 1920, 1922, 1928 and 1929. Sunbeam sold the rights to the Sunbeam name in 1937 to Associated Motor Cycles, and the last machine built prior to the Second World War rolled out of the factory in 1939. Motorcycling giant B.S.A. purchased the Sunbeam name in 1943 and began to look at their post-war horizons. They studied war-era BMW flat twin motorcycles, thinking they might build something similar, but rather than wholesale copying of the German machine B.S.A. decided a brand new engine was in order.

Enter Erling Poppe, a man who had been heavily involved in Britain’s motoring history. It fell to him to design a suitable engine for this new B.S.A./Sunbeam, and the twin-cylinder inline unit he derived was based more on automotive lines than those found in motorcycles. At 487cc’s the engine featured one-piece cast crankcase and cylinders with a chain drive overhead camshaft. This engine was placed in a double cradle steel tube frame, and prototypes tested. Unfortunately there were many problems with these early versions, including stripping of the rear shaft drive gears and terrible vibration from the solidly mounted engine.

One of B.S.A.’s solutions was to de-tune the engine, which, at 487cc’s was already in danger of being underpowered as the rolling chassis it had to move weighed a considerable amount. To quell vibrations the engine became rubber-mounted, uncommon for a British make. Hydraulic forks suspend the front end with a plunger-style set up at the rear. With its 16 inch wheels and beefy tires the Sunbeam is hard to mistake. Sunbeam produced the S7 for only two years before improving the breed and introducing the S7 DeLuxe and the S8. The S7 DeLuxe was still a touring-type motorcycle while the S8 had more sporting pretensions with conventional wheel sizes and lighter front forks.

Calgary motorcyclist Jim Kelsall wasn’t remotely interested in powered two-wheelers until later in life. Born and raised in England he grew up in a family interested in vintage machinery – his dad always had classic cars in the garage, including Jaguars and a Lagonda. In his teenage years Kelsall was driving a 1956 Morris Minor while his friends were pedaling mopeds. Two years ago, though, Kelsall wanted to treat himself to a motorcycle riding training course. He got his licence, but didn’t have a bike. Because he’s always been interested in vintage machines Kelsall started perusing classic motorcycle websites to see if any machines caught his attention. What he came across was an auction site that listed a barn-find 1947 Sunbeam S7 coming up for sale on the Isle of Wight. He phoned the auctioneer and placed a proxy bid – and won.

“Now I own a bike that’s on the Isle of Wight in the U.K. and I’m in Canada,” Kelsall said. Before it came to Canada, though, Kelsall wanted the bike checked over by U.K.-based Sunbeam specialist Stewart Engineering. He researched U.K. transport companies, and settled on Chas Mortimer Motorcycle Transportation. In May 2008 Chas Mortimer picked up the Sunbeam and delivered it to Stewart Engineering, an English firm that since 1960 has been developing and manufacturing parts for the post-war Sunbeam motorcycles. “(Stewarts) were at first reluctant to take it on, because their focus is on parts supply,” Kelsall said. But, take it on they did. A budget of 16 hours was arrived at, and over a period of 10 months Kelsall’s Sunbeam was assessed and repaired. What Kelsall had bought was a very original and unmolested S7, a bike that is quite rare. It is suspected as few as 200 Sunbeam S7s exist.  Stewarts flushed the tanks, rebuilt the carb and dynamo and checked the charging system.

Kelsall’s Sunbeam was last taxed for the road in 1986, but with little prodding it fired up and settled down to an idle. Now Kelsall had to get the bike home to Calgary. Once again Chas Mortimer was called upon. He picked up the Sunbeam from Stewart Engineering, packed it in a BMW crate, and delivered it to London’s Heathrow airport where it was put in the cargo hold of an Air Canada plane and flown to Calgary direct. Kelsall picked up his cargo in March 2009 and brought it home in its box on an open trailer. In his garage he uncrated it, changed the engine oil, put fuel in the tank and kicked it over. It fired on the second prod of the lever. Unable to contain his excitement Kelsall suited up and went for a ride – where he discovered a few problems, notably that gasoline was flowing out of the carb onto the hot exhaust, and the automotive-style clutch gave up. He managed to get back home, where Kelsall pulled out the engine and replaced the clutch and clutch cable, rejetted the Amal carb and installed slightly hotter plugs. He’s since put 1,000 miles on the Sunbeam riding it around southern Alberta, and he intends to maintain the oily rag appearance.

“I think I would be doing it a disservice restoring it,” Kelsall said. “It’s remarkably original, and I love to see bikes as last used.” 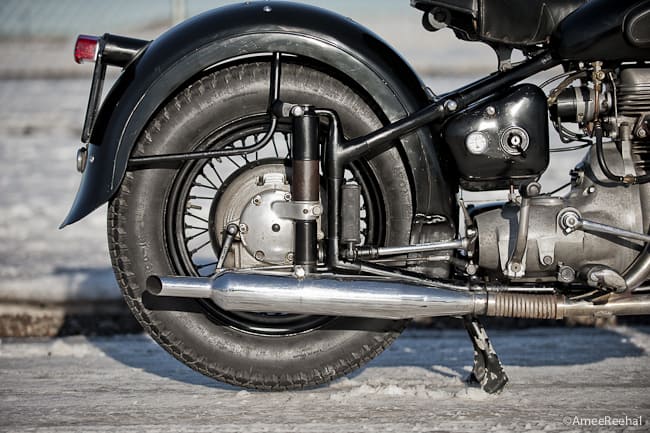 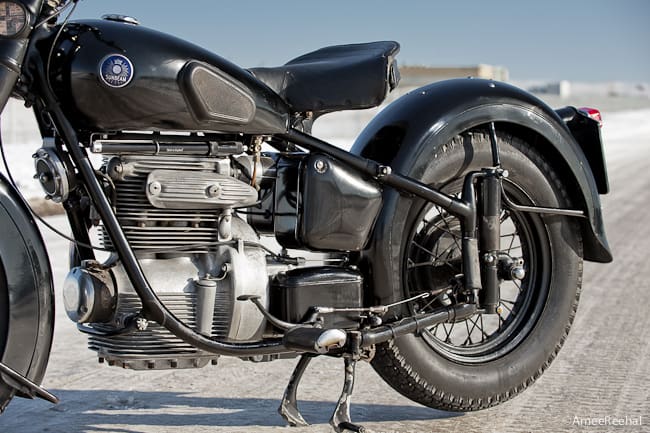 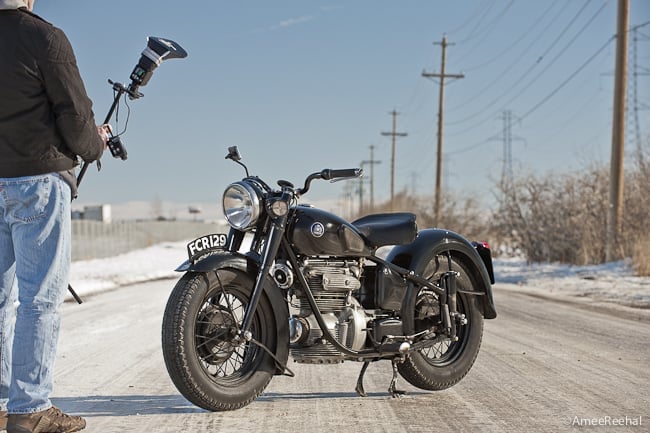 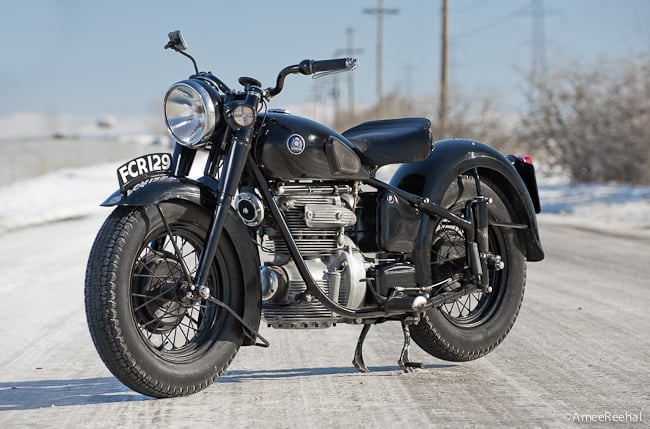 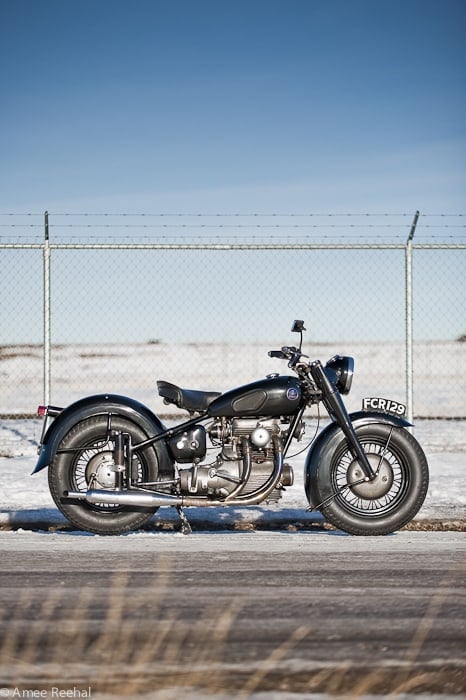 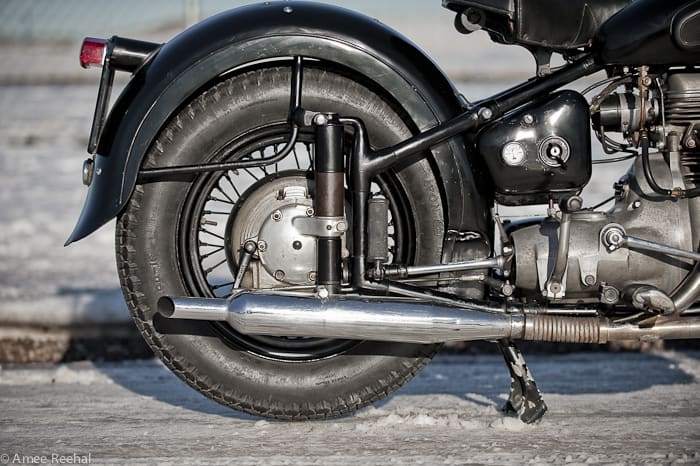 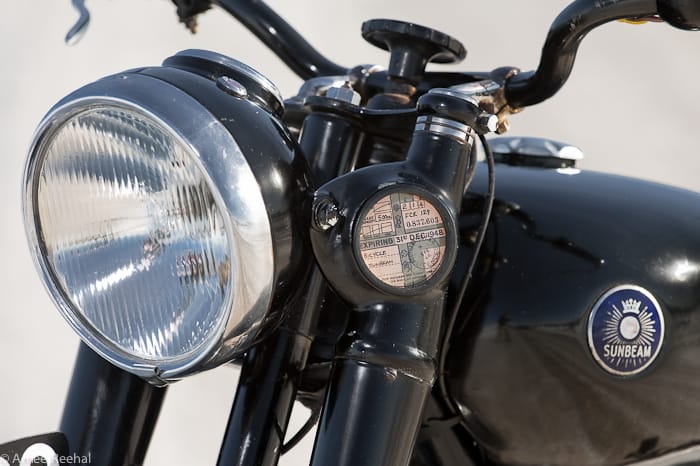 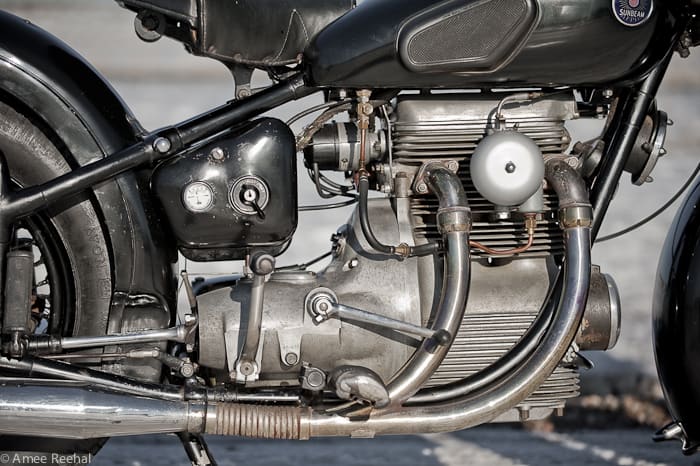 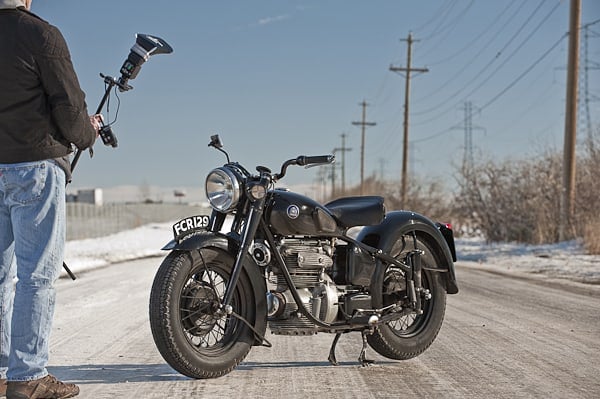