A new long-term alliance - from motorsports to the world of golf and tennis. Two true visionaries and disruptors in their own rights, Porsche and TAG Heuer have officially entered into a new strategic partnership, kicking things off with their first collaboration: the TAG Heuer Carrera Porsche Chronograph.

Powered by an 80-hour power reserve with a Calibre Heuer 02 manufacture movement built in-house, the red, black, and grey throughout the watch pays homage to Heuer’s historic models while staying true to Porsche’s colour palette. The bezel sports the Porsche inscription along with the distinct font for the indexes.

Of course, there are Porsche sports car features including numerals found on the dashboard, and the dial’s asphalt effect, created especially for this watch, expressing a passion for the road. Look closely and the redesigned oscillating mass on the transparent cristal case back channels a Porsche steering wheel.

This Porsche Tag Heuer chronograph comes in either a racing design-influenced interlocking bracelet strap, or a sportier calf leather strap with stitching that echoes the Porsche interior.

Though the storied brands have crossed paths before, when the great Steve McQueen wore the Heuer logo on his racing suit during the filming of Le Mans in 1970, in which he piloted a Porsche 917; followed by a string of joint ventures including the TAG Turbo Engine development for Niki Lauda’s 1984 McLaren F1 victories (three of them, to be exact), and partnership for Porsche’s Formula E team in 2019.

Hence, this Porsche x TAG collaboration comes as no big surprise. As Porsche puts it, “We bring together what our customers love the most about both of us: authentic heritage, thrilling sports events, unique life experiences and the fulfilment of dreams. We both strive to create some unique, magic moments for our communities. We now look forward to doing it together.”

More specifically, this partnership will see the two work together on the upcoming Formula E World Championship led by Porsche’s all-electric the 99X Electric racecar, the FIA World Endurance Championship (WEC), and virtual racing by supporting the Porsche TAG Heuer Esports Supercup. Along with some other classic Porsche events and rallies in the mix.

Outside the world of racing, the two will also pair up for the Porsche Tennis Grand Prix in Stuttgart, and the Porsche European Open golf tournament of which the automaker has been a title sponsor since 2015. 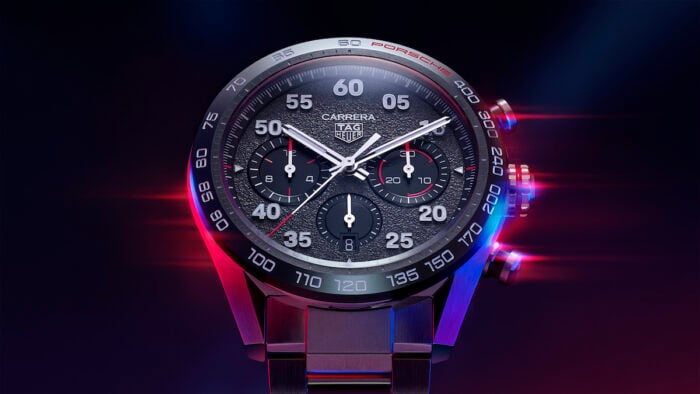