Moroccan designer Belkharmoudi Aziz gives us a glimpse of what the company's future battery-powered watercraft could look like. 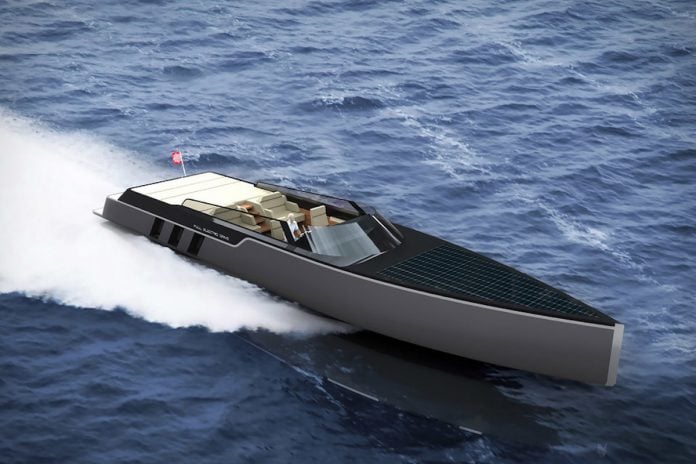 An all-electric boat isn’t out of the question for Tesla Motors. But until that actually happens, Moroccan designer Belkharmoudi Aziz gives us a glimpse of what the company’s future battery-powered watercraft could look like.

The Tesla E-Vision GT Boat is Aziz’s concept creation powered by two Model S powertrains to propel this 60-footer with 1800-hp under the deck. Similar to your conventional vessel with a pair of combustion engines, this Tesla boat has the same symmetrical mounted setup, but swap the petrol for electricity to bring this concept to a cruising speed of 30 knots, hitting a top speed of over 40 knots.

With enough space to accommodate 8 people, this luxury boat might be missing that burly roar you typically get from fast boats on the open waters. But on the plus side, the near silent experience from all-electric power might be more your speed – if and when, Tesla brings a Model S-powered watercraft to fruition.

Check out more of Belkharoudi Aziz’s work at Behance. Nothing wrong with traditional ATVs and their wheels, but should they not get you where you want to go try hopping on a Tinger Track ATV instead.
Read more
Recreational

Show up to the track in the Daymak C5 Blast Go-Kart Ultimate: an all-electric, pavement-destroying, brain-rattling kart propelling 0-60 in 1.5-seconds.
Read more
Recreational

Roll up to work in the Velocifero Mad -- a cross between a mini-scooter and an electric bike. Comes in 6 models and 5 motor options.
Read more
Recreational

Can-Am Maverick X3 seeks to push expectations of what a sport side-by-side vehicle can do.
Read more

Studded or non-studded: the choice is yours. We put the new Continental IceContact XTRM winter tire to the test. Here's our full review.
Read more
SUV and Crossover Reviews