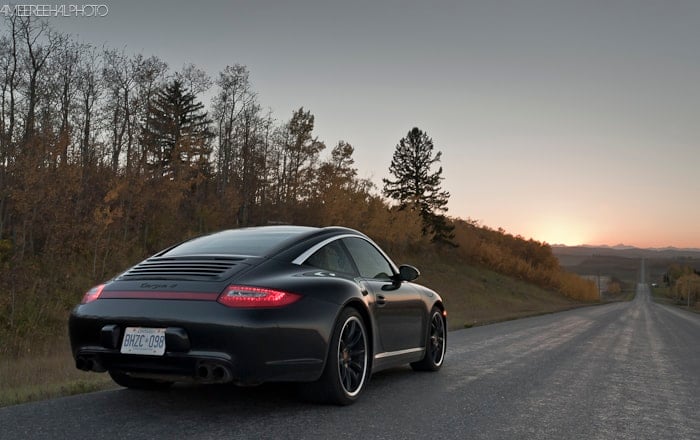 No turbo. No PDK. No paddle shifters nor a plethora of steering wheel controls. Just a 6-speed stick shift, glowering dark rims wrapped in fat-ass tires, a malicious exhaust note paired to an equally menacing near-black vehicle, all with a roof that opens up to the sky. Following a string of Porsche press cars showcasing the company’s latest and greatest offerings (and I’m not complaining), it was refreshing to test a something a little more nostalgic; something a little more familiar and fundamental, particularly in the stick shift. But at nearly $150,000 Cdn MSRP for this particular model, the 2010 Porsche 911 Targa 4 is anything but fundamental. With enough Porsche product options and OEM customization to make a grown man giggle, this 2010 Porsche 911 Targa 4 is built just right—understated and sexy yet overly capable.

While cabriolets may have a bad rep with the purists opting for nothing but a hardtop, the targa certainly closes that gap, providing the best of both worlds (arguably, best of all three). Gone is the cumbersome, removable hardtop targa first introduced in the 1960’s; thirty-years later into the late 1990’s, welcome the first retractable glass roof. Essentially, it’s an over-sized sunroof, and it’s awesome. When fully open, the glass roof panel slides back underneath the rear window. Visibility out the back is severely hindered, but hey, give and take people. A targa-top provides more than enough fresh air and sunshine without compromising any stability issues found in a drop top. Drop a mere $3250 and you’ll find your 911 Targa 4 with a set of multispoke, retro-styled 19” Carrera Sport Wheels, opposed to standard 18-inch alloy wheels with 235/40ZR18 tires front and 295/35ZR18 rears, alongside 13-inch vented rotors. Porsche’s PASM electronic damping control system is an extra $2720, as found here, while the various other stability and safety features such as ABS, PSM, and ASR are standard. The PASM (Porsche Active Suspension Management) is brilliant, offering a ‘Sport’ button that does more than offer a slick Sport button—press this magic button and stiffen your suspension for harder damping and better, tighter control. And to make things really magical, and immensely giddy, press the Sports Exhaust System button ($3830 upgrade): a curious little control denoted by a little icon of twin tailpipes, producing loud, burly exhaust tones out the exhaust pipes. I still have no idea whether this impacts performance in any way, but it’s totally gnarly and worth the money just to wake up the neighbors (sorry people who live down the street on the corner). Inside the cabin, the 2010 Porsche 911 Targa 4 is equipped with many valuable standards including a 235-watt, 9-speaker audio system; full climate control with active carbon filter; 3-spoke leather steering wheel; and leather seat surfaces, to name a few. All 911 Carrera and 911 Targa models find a standard PCM 3.0 system (Porsche Communication Management) adding a 6.5-inch touchscreen controlling all audio, navigation, and communications. This 911 Targa 4 saw optional black/sand beige interior ($5570); a gear/handbrake lever with aluminum look ($1470); power comfort seats with driver memory ($2120) along with seat ventilation ($1090); Bluetooth Phone Interface ($950); and nav module for the PCM ($2880). Nearly all Porsche products offer an optional Sport Chrono Package, enhancing and adding various features to the respective model. This 2010 911 Targa 4 finds the Sport Chrono Package Plus ($1310) delivering even sportier tuning of the engine and chassis. This package also adds the digital and analogue timer nestled on the upper dash, the Sport select function, and the performance display and personal memory function with the PCM system. The Atlas Grey Metallic is a gorgeous exterior paint setting you back at $4280. A variety of other exterior features on this Targa 4 have been colour-matched (including the 19” Carrera wheels), at a premium, but the final result looks stunning, creating this furtive 911 Targa 4 certainly setting it apart. A speed activated rear spoiler is standard while self-dimming mirrors and dynamic cornering lights are optional ($580 and $940, respectively) as in my tester.

Clearly, each Porsche can be customized over and above, and this 2010 911 Targa is no exception. So, when evaluating a Porsche, the personal agenda should definitely be taken into account. While all Porsches are exceptional, they’re not all equal. Nor should they be. With nearly $150,000 to spend, there’s a few ways to do it. But this 2010 Porsche 911 Targa 4 is flawless (okay, maybe add the PCCB brake upgrade, but hey). Level up your man cave with the special edition 911 Soundbar. Limited to 911 units, this 200-watt blacked-out version brings the 500-hp GT3 to your personal space and your wife will love you.
Read more
Porsche 911