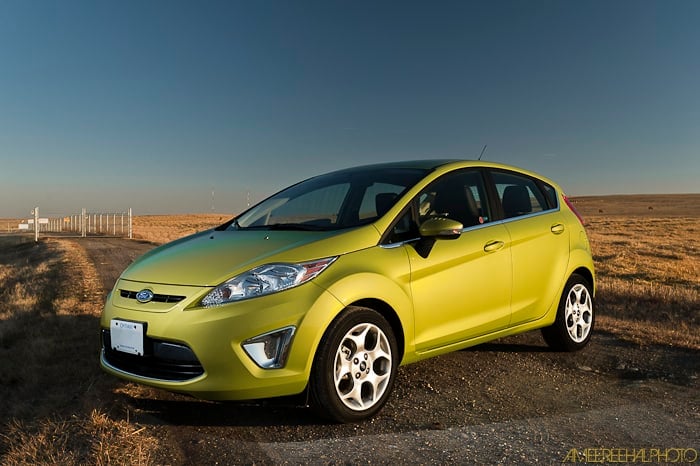 The 2011 Ford Fiesta just took home the hardware for Best New Vehicle-Under $21k as voted on by the Automobile Journalists Association of Canada (AJAC) during TestFest held last month in Niagara-On-The-Lake, Ontario–an annual week long event where journalists vote on the ‘Best New’ vehicles within various segments and price-points, conducting back-to-back road tests within each class. The Fiesta beat out the Mazda2, Scion xD, Scion xB, and VW Jetta. And now, finally, the best-selling car in Europe for years and with over half a million whipping around Europe and Asia, Ford has finally brought the chic Fiesta across The Pond, returning to North America after a nearly 30 year hiatus (remember the 1982 Ford Fiesta?).

Exactly one year ago today, I had the chance to attend the Canadian media launch for the Fiesta in Vancouver. At the time, the official Fiesta release date was still 6 months away and the versions we experienced where all Euro spec. One year later, not much is different between the two. The 2011 Ford Fiesta today is just as stylish and sleek, with a starting price-point of $12,999 Cdn MSRP for the entry-level S Sedan. From here, choices include the SE Sedan ($16,099), the SE Hatchback ($16,799), the SEL Sedan ($18,199), to the grand daddy SES Hatchback Fiesta, as per my tester, ringing in at $18,899. Add $1200 for the leather seat upgrade, as with my hatchback, and we’re well above $20k for this subcompact rocket. However, more than likely, Ford expects it’s entry-level SE’s to be the volume sellers, catering to the younger, money-strapped demo seeking that value subcompact. The 2011 Fiesta is that, and much more.

Powered by a 1.6-litre DOHC I-4 engine producing 120-hp and 112 ft-lbs of torque, the Fiesta is fun and nimble yet incredibly fuel efficient, offering a best-in-class 4.9-litre/100km on the highway. In the city, the Fiesta handles brilliantly, negotiating tight turns and narrow roadways with ease. Specially tuned front struts, bushings, dampers, stabilizer bars and a rear twist-beam axle give the Fiesta that spirited, sporty edge; something I’m sure Europeans certainly valued. Equally as confident on the highway, the Fiesta handles great on the highway, a pleasant surprise in a b-segment car (I had the Fiesta for a few days during the AJAC TestFest few weeks back, driving up and down the QEW from Toronto to Niagara-On-The-Lake and back; the Fiesta felt great at high speeds with enough high-end torque when needed). A six-speed manual transmission comes standard with an optional industry-exclusive PowerShift six-speed auto that combines responsiveness and fuel efficiency found with a manual tranny with the benefits of the automatic, including a dual dry-clutch setup. Perhaps we have the Europeans to thanks, but Ford has taken the innocuous subcompact car and made it sexy, realizing that ‘small’ need not equate to ‘bubbly,’ that often includes cheesy styling cues that no young hipster would dare drive. Where other subcompacts like the Toyota Yaris and Nissan Versa totally missed the styling mark, Ford has designed a progressive, sporty ride in the 2011 Fiesta. Muscular, sculpted front fenders and sleek elongated headlamps, for instance, are two things on the Fiesta you probably wouldn’t expect on a b-class car. Add to this, nine colour options for added individuality (my Fiesta came in Lime Squeeze…a vibrant colour that looks much cooler in person than it sounds). Every angle of the Fiesta looks hot, particularly the hatchback. Compared to it’s competitors, with exception to maybe the all-new Mazda2 with which it shares the same platform, the 2011 Fiesta is by far the best looking. The cabin is just as bold, with surprisingly ample space, especially head room. The North American Fiesta finds bucket seats up front with 60/40 split second row seats allowing even more space. While the entire front dash is progressively styled, it’s not gaudy or over-the-top. Everything is well-balanced and easy to reach and use. The centre stack setup looks sharp, is well laid out, and the abundant radio memory buttons are a welcome feature. My SES Fiesta came equipped with the optional class exclusive 4-inch LCD multifunction display placed up and centre, providing audio system data, vehicle settings, and of course, Ford SYNC info, to name a few. You can also scroll through seven different interior ‘mood’ lights, subtly lighting up areas including the cup holders, above the glove compartment, and floor mat area…a small little thing thats actually pretty cool.

For more info on the 2011 Ford Fiesta, visit HERE. The Volvo V60 Cross Country does a great job of reminding us why station wagons were once so popular (and can do pretty much everything that an SUV can).
Read more
Ford