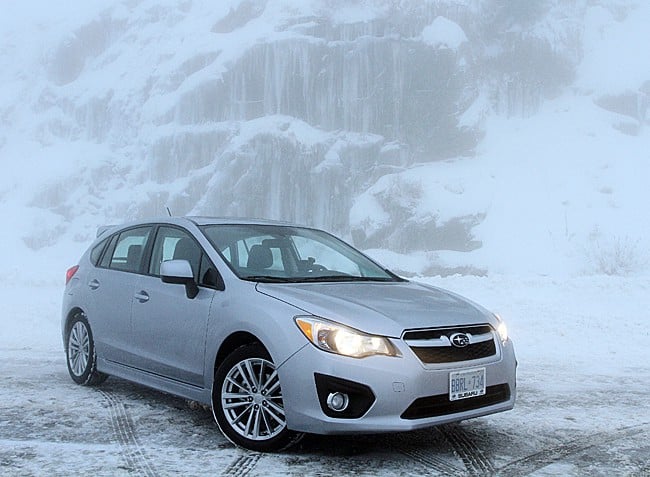 Canadians love small cars, so it should come as no surprise that the compact car segment represents a substantial portion of the new car market. As a result, the offerings in this category are a hot property for the manufacturers and as such, are reasonably priced, well-equipped, and perfectly suited to meet the driving needs of the majority of consumers.

Subaru enters the 2012 model year with an all-new Impreza. This is the fourth generation of the brand’s ultra-successful, bread-and-butter model which has always been a popular choice with Canadian buyers. With this car Subaru hopes to expand appeal for the brand and promote the fact that the company produces high-quality vehicles that are reliable, comfortable and efficient. The biggest news is that the new power train has been engineered to both maximize fuel efficiency and preserve the car’s reputation as a car that is fun to drive.

“More than you’d expect in a compact car.” This is the tagline being used to market the Impreza, and after having spent the better part of a day behind the wheel of a couple of examples of this surefooted machine, I am happy to report that for once there seems to some truth in advertising. The new car features a much more refined design, improve fit-and-finish, and an impressive level of standard equipment across the board. Add to this crisp handling, improved ergonomics, a responsive power-train, and improved fuel economy, and I am certain Subaru will attract a host of new customers to the fold.

The Impreza features new styling from bumper-to-bumper, but it is most evident up front where a hexagonal grille and stylish new headlights sporting a “hawk-eye” design (similar to those on the current Legacy) dominate the real estate. The car now features a more angular body shape and it’s obvious that Subaru’s design team sought to give the car its own identity so there are fewer styling similarities to its traditional WRX siblings. Having said that, the Impreza’s new look is still surprisingly muscular, as a wide stance and prominent fender flares hint at the car’s increased size. Once I slipped behind the wheel it was apparent that the car was roomier than the previous iteration. I am a rather large individual, but still managed to fit comfortably in both front seating positions. I was not wanting for more leg, hip, head or shoulder room.

I also tried the rear compartment on for size. The longer wheelbase made it possible for me to squeeze into the two outboard seating positions as long as the front seats weren’t set all the way back on their slides. The centre position though, was not a valid option for my 6’2″, 260lb frame. Ingress and egress is much improved as both front and rear side door openings have been made larger to better accommodate North American buyers.

The fit-and-finish throughout the car was very refined and upmarket, and the quality of the materials used is top-notch. I found the placement of vital switchgear and controls well thought out, and the three-spoke (tilt/telescoping) steering wheel provided excellent feedback. The instrumentation and gauges were readily visible as was the compact information display situated centre dash.
Visibility was exceptional as the new cabin-forward design utilizes thin pillars, an elevated seating position, and taller windows to give the passenger compartment an airy feel. This leads to improved sightlines which promote situational awareness and make your time behind the wheel much less stressful. As before, there are two body styles available. A traditional, four-door sedan, or a five-door offering for those buyers looking to maximize cargo space. The list of standard equipment is lengthy and stacked in favour of the consumer, even if you select a base model. There are four trim levels- 2.0i, Touring, Sport, and Limited – to choose from so it is easy to find the perfect model for your needs, and with the low entry price of $19,995 you get behind the wheel of the most fuel efficient all-wheel drive car sold in North America.

Under the hood you will find an all-new, 2.0-litre horizontally-opposed four-cylinder engine that generates 148 horsepower and 145lb.-ft. of torque. This compact engine replaces the outgoing cars venerable 2.5-litre four-cylinder, and when partnered to the optional Lineartronic continuously variable transmission (CVT), is said to deliver a vast improvement in fuel economy over the 2011 model.

This is the second-generation of Subaru’s new “Lineartronic” CVT is a lighter and more compact version of the one first introduced in the 2010 Legacy and Outback models. Subaru’s stated goal is to make their CVT provide smooth, linear acceleration like a conventional automatic transmission while still offering “shiftless” operation and better fuel efficiency. The new CVT also features a “second-gear” start to avoid wheel spin on slippery surfaces. Drivers have the option of shifting the CVT manually with the shift lever or the paddle shifters behind the steering wheel – there are six simulated “gears.”

The one thing lacking from many of today’s small cars is an invigorating driving experience. Sure, they are great for getting you from point A to point B every day, but when it comes to putting the occasional smile on your face, it just isn’t in the cards. Subarus have always been fun to drive, and with this all-new platform Subaru’s engineers have worked hard to ensure that drivers will enjoy getting behind the wheel of the Impreza. The car is lighter than the outgoing model, and now incorporates a stiffer chassis and an improved suspension system. Ride quality was more refined than I expected, and the suspension does an excellent job of keeping the car planted to the pavement when cornering.

During my short time with the Impreza I took the car to West Vancouver and went exploring up Cypress Mountain. The car came alive in the tight radius turns and handled the climb to the ski area without any drama. The upper parking area was blanketed in snow so I took the opportunity to play a little and put the all weather capabilities of the car to the test. The car retained traction despite my best efforts to upset it in the snow, and it was only wearing all-season rubber! I love a nice manual transmission, but the majority of Impreza buyers will probably purchase the optional Lineartronic CVT transmission. This is the second-generation of this transmission, so it has been reworked with improved gear ratios to better suit the torque characteristics of the new engine, and it is said to be 10% more efficient than its forbearer. Should you wish to make your own gear selections you can shift the lever manually, or utilize the shift paddles mounted to the steering-wheel. This proved most effective during my romp up Cypress Mountain, as I was able to traipse through the six simulated gears in an effort to fully evaluate the car’s handling and performance potential. Around town the new CVT was quick to react to the stresses of stop-and-go driving. Throttle response was instantaneous and acceleration was commendable given the car’s relatively low power rating. A unique feature of this new CVT is a novel “second-gear” start function, which will go a long way to help avoid wheel-spin when the vehicle is operating in slippery conditions. This will no doubt be a feature relished by many Canadian drivers.

One thing that has set Subaru apart from the other Japanese brands over the years is the fact that all of the company’s models come equipped with Subaru’s proven symmetrical all-wheel drive system. For Canadian buyers willing to pay the premium (when compared to similar sized offerings) this guarantees that their car will be a strong performer year-round. The drawback with this system has always been the fact that it adds weight and additional operating costs (due to servicing requirements and increased fuel consumption). With the arrival of the 2012 model, Subaru has levelled the playing field to such an extent that the car is as fuel efficient as most of its most popular front-wheel-drive competitors while still offering all-wheel-drive! Now that is impressive! The team behind the Impreza knew that this vehicle had to be exceptional as in order to gain market share in a very crowded marketplace. Subaru needs to showcase the type of quality product that the Japanese company is capable of producing. Its success now falls on the shoulders of the marketing personnel who have to work hard to attract new buyers to the showroom and get people behind the wheel of this world-class vehicle. Once this happens, the Impreza will sell itself. It is that good. The vehicle feels roomier and more luxurious than many of its competitors, is easy on fuel, but best of all, it offers the company’s superb all-wheel-drive system. Buyers of the Impreza also benefit from the knowledge that the model has held the highest predicted residual resale value in the compact car segment for the past three model years, as well as the fact that it has demonstrated top results when it comes to passenger safety. In short, if you happen to be shopping for a compact car, you would be making a huge mistake if you overlook this car.