Inspired by the iconic Toyota Supra and MR2 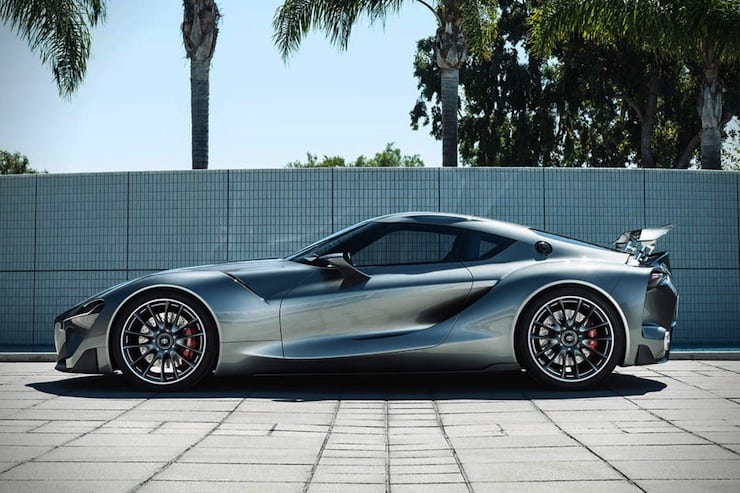 Toyota debuted their sleek FT-1 Concept this past January at the North American Auto Show. Now, they’ve introduced a second-version of the concept — same great design but much more striking, inside and out. And overall, more sophisticated than the first.

This version of the Toyota FT-1 finds a saddle leather interior with more supple seats with an all-natural grain for a more premium feel, whereas the original FT-1 is more bold and driver-oriented. The designer, Sellene Lee, found inspiration from superhero costumes, particularly, the high-performance, modern materials use to make them. Aside from the superhero performance concept, Sellene Lee veered away from the typical stitching or piping edge treatment found in many vehicle interiors. The painted red edges on the welded leather and painted brown edges on the second FT-1 were inspired by high-end leather bags she found in an upscale department store.

When drivers sit in FT-1, they can feel the difference in materials, textures and color choices that resulted from the design team’s work.

With sculpted intake and outlets, the FT-1 concept retains styling cues and inspiration from the old 2000GT, Celica, Supra MR2, and now FR-S. The original FT-1 shines in race-inspired red, but this second version is a complete 180 yet equally as striking in graphite. We outline the major changes to Toyota's popular mid-size pickup, including the Tacoma TRD Sport & TRD Off-Road. Price is up $1,000 but so are the features.
Read more
Toyota

Lexus updates its V8-powered RC F coupe for 2020 but it's the rare Track Edition with 19" BBS wheels, Brembo brakes, and distinct interior you should know about.
Read more
Toyota

Entry-level 2020 Corolla priced under $20k gets a stick shift

Redesigned for 2020, the new Toyota Corolla pairs stylish looks with a hybrid option, starting at under C$20k & topping out at C$28,490 for the Corolla XSE.
Read more
Overland

Designer Rain Prisk puts his off-road spin on the new 2020 Supra, one month after Toyota officially debuted the iconic coupe. We need this in our garage.
Read more
Toyota Tacoma

The mid-size leader for 14 years, Toyota debuts the new 2020 Tacoma at the Chicago Auto Show. Can new headlights, grille, and multimedia keep it at the top?
Read more
Toyota

In Pictures: The Burly and Blacked-out 2016 Toyota Tundra TRD Pro...