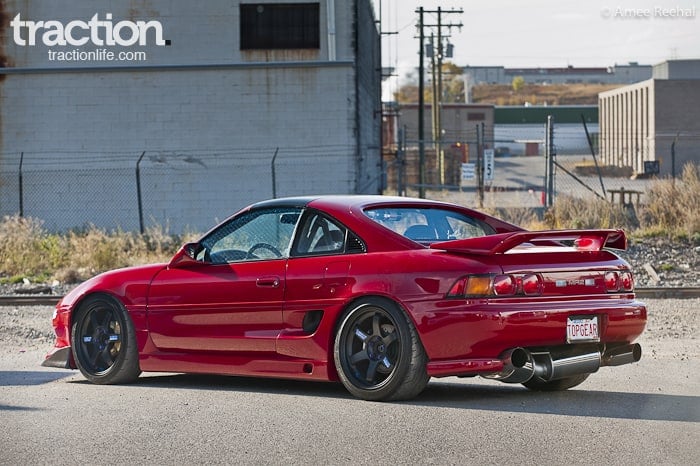 The Case Of The Missing MR2: After an Evil Knievel–style street racing crash, Ryan Dandurand’s MR2 went into hiding during its lengthy rebuild.

The second-generation Toyota MR2 had a decade-long production run (from 1989 to 1999), and yet somehow it remains one of the more under-appreciated Japanese sports cars of the ’90s. You just don’t see many Mister-2s on the street these days, not that the roads are cluttered with Supras and Celicas, either. Time marches on, and the GT-86 (Scion FR-S) is Toyota’s new sports car poster child, but there’s still a dedicated fan base out there who’ve kept the ’90s turbo Toyota torch burning bright as they wrench on their beloved SW20’s fire-breathing 3S-GTE engine.

One of the most stalwart of MR2 owners has to be Ryan Dandurand, an Alberta native who tried hard to kill himself and his SW20 while street racing as a teenager. But as fate would have it, he not only lived to tell the tale but also rebuilt his badly bent MR2 Turbo into one of the cleanest examples we’ve ever laid eyes on. As Ryan explains, “I bought the car from the original owner back in 1997 with 30,000 kilometers on it. I was 17 and had saved up for three years working odd jobs to buy the car. I emptied out my bank account the day I bought it, and I even had to borrow money from my parents so I could register and insure it. I began modding it shortly thereafter. I purchased TEIN springs, 17-inch Konig Tantrums, an HKS exhaust and boost controller, a Bomex front bumper, Tom’s side skirts and rear bumper, and, of course, a nitrous kit.”

Sounds like a pretty typical build for that era, and the nitrous kit should probably tip you off as to what sort of shenanigans Ryan was involved with. “Having nothing to do as a teenager growing up in Alberta, our weekends were spent street racing. We would fill up our nitrous bottles on Friday and run our cars hard Friday and Saturday nights, looking for street races wherever we could. This was before the original F&F or anything like that, but in the summer of ’99, a street racing accident put my MR2 into hibernation. I ended up jumping it over two cars and landing in a Safeway [grocery store] parking lot. The wheels exploded and the body kit shattered,” Ryan admits.

I bought the car from the original owner back in 1997 with 30,000 kilometers on it. I was 17 and had saved up for three years working odd jobs to buy the car.

Understandably, Ryan parked his battered Toyota for a good, long while, so long that a lot of local racers assumed it had been written off and sent to the scrapyard. The car sat from 1999 until 2008, while it’s only exposure to sunlight was during trips to the body shop. As Ryan shares, “I wanted to do a full-on restoration as well as make the car look, drive, and handle like a well-rounded car should. I went through two engine setups, three suspension combinations, four sets of wheels, and various other part combinations before I settled on what you see now. Some of the parts are one-offs or part of a very small production run. I wanted this car to have some of the most rare and unique parts ever available for it. Everything else was replaced with brand-new OEM Toyota parts. In certain instances, I had to wait six months for them to come in because no one else was stupid enough to order a brand-new turn signal assembly from a Toyota dealership.”

As Ryan toiled away resuscitating his Mister-2, the rumor mill around the Alberta tuner scene began to spread the tale that the car never really existed at all. But like a phoenix rising from the smoldering ashes of an Evil Knievel–style crash landing in a parking lot, Ryan’s SW20 has gone from myth to legend thanks to his dedication to the cause. Not that its 3S-GTE makes 1,000 hp (more like 386 whp at 16 psi) or runs the quarter-mile in a Toretto-required 10 seconds, but it does turn a seriously quick lap around Race City, the recently closed road course just outside Calgary.

I went through two engine setups, three suspension combinations, four sets of wheels, and various other part combinations before I settled on what you see now. As far as his build philosophy goes, Ryan adds, “The car has fully working A/C, a nice stereo, and isn’t a rattle can like many track-prepped cars. Straight-line speed isn’t really what this car is about—where it really shines is on the track. Turbo lag is minimal, and the LSD and custom spring and damper rates really help put the power down. It’s been like putting a puzzle together, trying to make all the parts work well with one another. I think that’s what separates the good builders from the bad, and I didn’t want to get caught up in the trendy hellaflush slamburglar scene. I want this car to look good 10 years from now, and trend builds don’t tend to age well.”

Ryan Dandurand’s SW20 MR2 may have been missing from the Alberta tuner scene for the better part of a decade, but it’s been more than worth the wait given just how clean a package he’s put together. The timeless GReddy Gracer body kit and Bomex aero mirrors and spoiler are pure ’90s JDM goodness, but the fully restored exterior including new glass, weatherstripping, foglamps, and a fresh coat of BMW M3 Imola Red paint give it a newer-than-new freshness. We just hope Ryan manages to keep it shiny side up this time, since the closure of Race City means a lot of Alberta’s go-fast enthusiasts are being forced to take it to the streets.

Shout Outs > Cam Koole from Lightspeed Innovations in Red Deer; the original Speedtech racing crew, especially Nick Chow, Dan, and the crew at Screamin Paintworks; Mike and the guys at Alpine Autowerks; Rhys at Revwerks Tuning; Joe at Autotech; Lorne and the boys at Urban X Tire; the guys at Beyond.ca for repping the scene since day one and the Illmotion crew for keeping the scene alive in Alberta; Paul Tieken and Swizz Beatz for the help during the long nights in the garage. 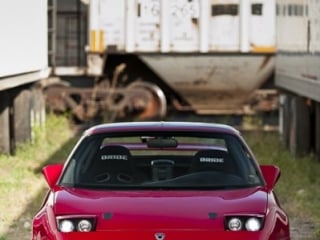 Amee Reehalhttp://ameereehal.com/
Shooting motors professionally since film was a thing, Amee's work has been published in various outlets including NBC Sports, Chicago Tribune, SuperStreet, GlobeDrive, MotorTrend, and others. He's a writer, editor at TractionLife.com, AJAC member, and full-time digital marketer at Traction Media working with national brands. Find him traveling, spending time with his kids and family. Or golfing, poorly.
FILED UNDER:
ToyotaCultureTuner Cars

Lexus updates its V8-powered RC F coupe for 2020 but it's the rare Track Edition with 19" BBS wheels, Brembo brakes, and distinct interior you should know about.
Read more
Toyota

Entry-level 2020 Corolla priced under $20k gets a stick shift

Redesigned for 2020, the new Toyota Corolla pairs stylish looks with a hybrid option, starting at under C$20k & topping out at C$28,490 for the Corolla XSE.
Read more
Overland

Designer Rain Prisk puts his off-road spin on the new 2020 Supra, one month after Toyota officially debuted the iconic coupe. We need this in our garage.
Read more
Toyota