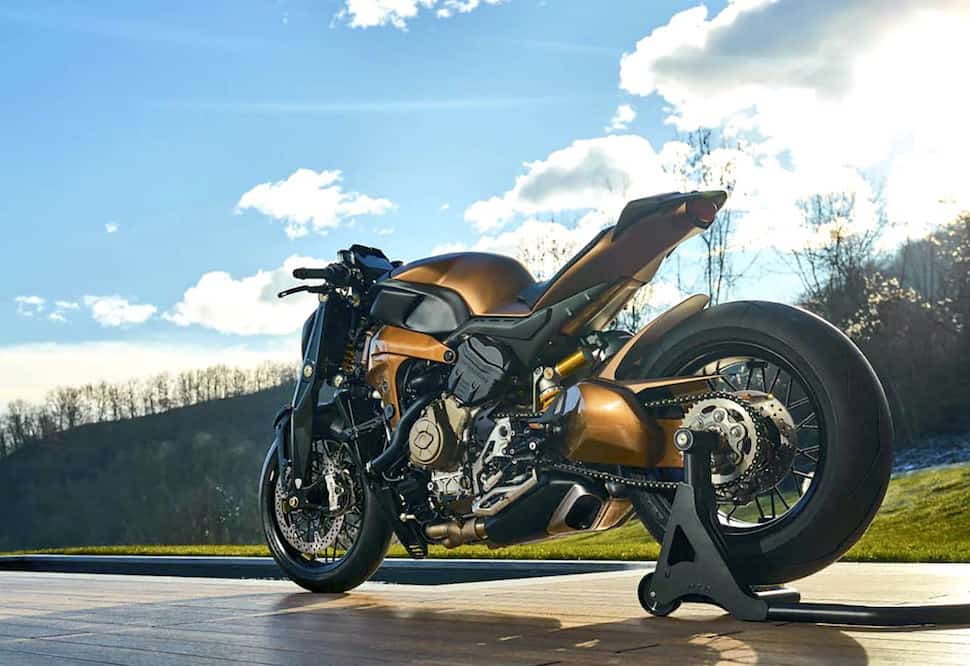 8Bike builder Officine GP Design isn’t going to wait for Ducati’s possible plans to build a naked Panigale V4. So they went ahead and made their own with the V4 Penta.

Though not technically a true naked version of the popular 1103 cc sport bike introduced last year with a new v4 engine, the limited-series V4 Penta transforms the Ducati Panigale V4 into a completely different beast, thanks to Motul ambassador Luca Pozzato who integrated a healthy dose of brand-new components specifically created for this custom bike.

As Ducati’s first large-production, V4-powered street bike, the team at Officine GP Design set out to produce a “creature” based on the Italian motorcycle brand’s signature DNA of luxury, technology, and progressive design. Limited to 9 models, this custom rolls out of the builder’s garage as “one of the most exclusive and ambitious projects that Officine GP Design has ever made,” according to the company.

Sporting a purpose-built tank cover and redesigned front fork with semi handlebars, the V4 Penta does have a somewhat peculiar front look that may not be a favourite with Panigale V4 fans — buy hey, that’s how custom design works.

Rolling on custom Jonich SX alloy wheels paired to Ohlins dampers, along with front and rear lights borrowed from other Ducati models and a paint scheme that gets a brand new texturized coppery skin, this beauty isn’t cheap at around US$114,000 (or 100,000 euros, to be exact).