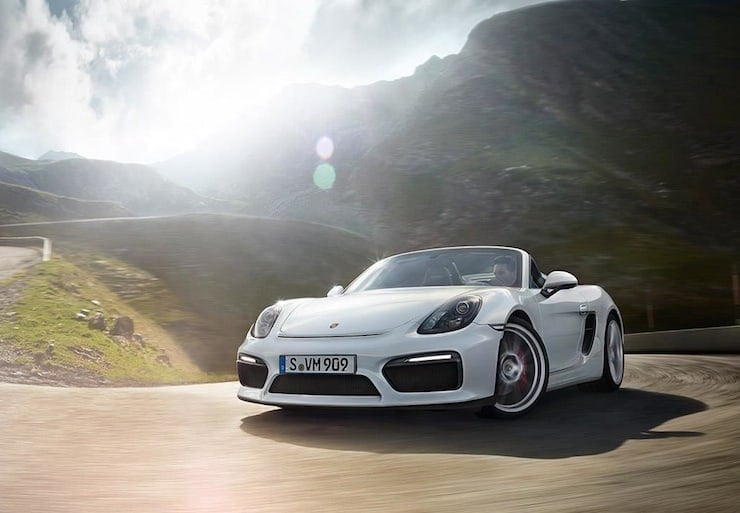 With spring slowly thawing from the gripping sarcophagus that is winter, there is nothing more exciting than warm, spring days where the dream of driving with the top down is burned into one’s mind. For those who have roughly $85,000 to spend, a new Porsche Boxster Spyder could be your summertime steed.

Breaking cover at the 2015 New York International Auto Show, the 2016 Porsche Boxster Spyder will be the top-tiered topless offering from the sports car brand. The car denotes a problem Porsche hasn’t really addressed—the performance creep on the 911. While the design is decidedly Boxster, the front and rear fascias were taken right from the recently released Cayman GT4. As with previous Spyder offerings, the fabric roof is still opened and closed by hand.

Inside, the interior includes light sports bucket seats with large side bolstering for holding one in place during heaving cornering. There is also a new, 360-millimeter steering wheel.

If you are looking for creature comforts, look elsewhere. The 2016 Boxster Spyder lacks both a radio and air conditioning in the pursuit of saving weight. However, one can order both at no extra cost. If you are looking to get behind the wheel of a new Boxster Spyder, you can place your order now with the car hitting the market in July of this year. Anthony Alanizhttps://anthonyalaniz.com/
Born and raised in the shadows of Detroit, Anthony has been writing about the automotive industry since 2008 — before the bailouts, bankruptcies and buyouts. Industry news and car reviews are Anthony's ammunition and working for outlets including CarandDriver.com, Revvolution.com, The Daily Telegram is the vehicle to deliver them. J-school graduate, weekend mechanic, car enthusiast and open-road connoisseur.
FILED UNDER:
Porsche CoupesPorsche 718 Boxster