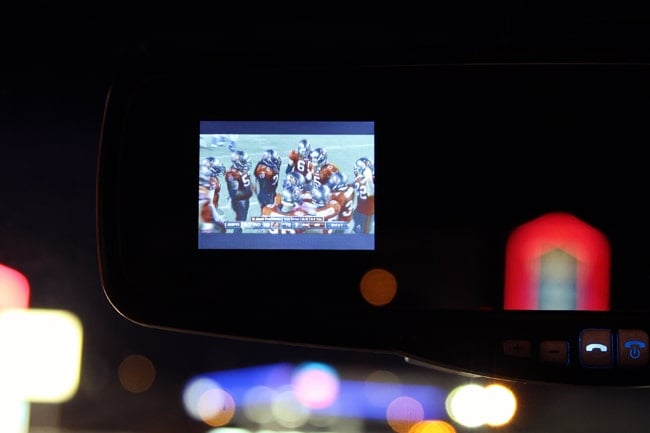 One of the most popular accessories on many high-end luxury vehicles is the back-up camera system. These clever devices provide the driver with a clear view of what is happening behind their vehicle, making the operation of backing out less stressful, and parking a breeze. Unfortunately, very few budget-friendly automobiles offer these systems as an option. Luckily, there are several companies out there working hard to fill the demand for these safety devices and offer them at a reasonable cost.

Winplus is a global marketing company that is well known for its large catalogue of consumer electronics, lifestyle products, and automotive accessories. The company markets the Yada brand, which is distributed through Canadian Tire stores across the country.  Recently, I received the Yada Rearview Mirror Backup Camera which incorporates a backup camera as well as a Bluetooth speakerphone. The model number is VD-V43, and it retails for C$249.00. This seems like a reasonable cost when you factor in the number of features integrated into the system, but should you need a professional to install it the cost could quickly double. The Yada system consists of a replacement rearview mirror that features an integrated display screen upon which the user will see the view from the camera, as well as the information pertaining to your cell phone. A small, water resistant camera unit is mounted to the rear of the vehicle (usually clipped and taped to the top of the licence plate) and hard wired to the reverse lamp. A signal booster is connected to the camera which is used to send the wireless signal to the mirror’s receiver. Placement of the booster is limited by the length of its connecting wire, but it is easily mounted using double-sided tape.

Installation of the mirror is relatively simple, as it simply clips onto the existing mirror to which it is secured with Velcro straps. One of my straps proved faulty, but the company sent me a replacement set in short order. It is important to cinch these tight otherwise the mirror will vibrate when the vehicle is travelling on irregular surfaces which tend to make it useless. The mirror unit derives its power from either a 12-volt accessory cord, or you can hard-wire it to the vehicle’s electrical system. I chose to operate the vehicle using the plug-in method as a precaution in case I was not happy the unit’s performance. Once I powered the mirror up and made sure it was working, I enlisted the help of my friend John to perform most of the install, as he is a mechanic and possessed the electrical knowledge and tools we would require to complete the task. The instructions for the installation process are not very thorough, nor are the markings on the various wires included with the kit, so you would be wise to find a knowledgeable assistant and a circuit tester or multi-meter. The entire process took us about an hour-and-a-half to complete. When you turn the key to start your vehicle the Yada system’s screen comes alive as its receiver connects via Bluetooth to your cell phone. Once connected, the screen goes dark until you select reverse or use your phone. The pairing process is painless, and overall the quality of the speaker is quite good. The microphone is sensitive enough that you do not have to shout, but I was informed that the sound at the other end was a little tinny, with the slight hint of an echo. I can live with that, as it’s nice to have hands-free capabilities so that I stay focused on the task of driving, rather than the functions of my phone.

I should also point out that the system is capable of storing a rather impressive 950 contact entries, and caller information (caller’s name or phone number) is displayed on the LCD screen when the phone is in use. Operation of the backup feature is a simple process, as the camera will automatically power up when you select reverse gear. It may take a few seconds for the display to receive a clear signal, but once it focuses the clarity of the system’s 2.4-inch LCD screen, as well as the quality of the image provided by the camera, will impress. This is especially true at night, as the camera utilises the light cast from your reverse lamps to enhance its night vision capabilities.

The camera captures a 90-degree, wide angle view of the scene behind you, so blind spots are virtually eliminated, but it is still vital to use your side mirrors and perform a shoulder check when backing up. Users can select to have a pair of tri-colour bars projected as an overlay on the viewing screen at the touch of a button. In theory these are meant to help guide the driver into a parking spot and depict the route of travel. Unfortunately this function is useless without integrated proximity sensors, and for some reason the Yada guide bars sit vertically, rather than angle towards the horizon. If my vehicle was a helicopter, they might prove useful. During the first day of testing I was surprised when I noticed the screen flicker while I was driving. The only times the screen should be active is when the vehicle is operating in reverse, you are adjusting system settings via the simple menu, or are sending or receiving a phone call. Unfortunately my camera seems to share its wireless frequency with a wide variety of cameras, so as I drive around the screen comes alive with images from the feeds of various security and traffic cameras. It also seems to pick up signals from bars and pubs, resulting in the occasional appearance of a football or hockey game as it captured errant signals along my route of travel. This is inexcusable, as it causes a great deal of distraction for the driver, especially when driving at night. A quick web search revealed that the problem I experienced with the Yada system’s receiver picking up  signals from other wireless cameras is quite commonplace for the brand,  so it is something to consider should you be considering the purchase of this device.  If you would like more information about the system Winplus has set-up a dedicated website for their Yada line of products: www.letsyada.com

Wireless charging and better materials, the Parrot Zik 3 headphones build on the popular Zik. But at a hefty price-point are they worthy? We break it down.
Read more