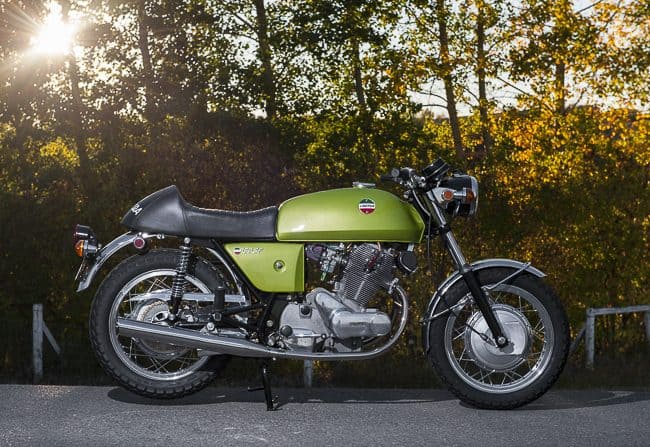 Calgary motorcycle guru John Whitby has been at it again. Instead of fabricating a custom café racer or dual-purpose machine in as little as two months, this time he’s turned out a restored 1972 Laverda 750 SF.

Did it take Whitby two months? “Oh, no, no,” he laughs. “This took six or seven months from start to finish.” He found the neglected Laverda in a basement. Last registered in 1984, it looked as though it hadn’t run for years prior to that.

“It had been apart for a very long time,” Whitby says. “The engine was out of the frame, and it was in pieces for whatever reason. The top end, including the cylinder head and barrels, was off.”

Inspired by the Honda Super Hawk

For those familiar with the Honda 305 Super Hawk, the twin-cylinder alloy engine in the Laverda looks remarkably similar. There’s a reason for that. In the early 1960s when Massimo Laverda and his chief engineer Luciano Zen decided to build a powerful sport bike for the all-important American market, they purchased a Honda Super Hawk to study. The Hawk’s engine, with its horizontally split crankcase, unit construction gearbox, overhead camshaft, 12-volt electrics and push button starter was the one to emulate for their project. Happy to copy and enlarge the Japanese powerplant, Laverda found inspiration for the chassis in those built by German and British manufacturers, notably BMW’s R69S and Norton’s Featherbed-framed 650SS.

A running prototype of the Laverda 650 was ready in 1965, and displayed in 1966 at the Earl’s Court motorcycle show. Nothing appeared on the market until 1968, when a 750 prototype had also been built and tested. Both 650cc and 750cc motorcycles were sold in 1968. Laverda dropped the 650 in 1969, and the larger machine became two models, the 750GT and more sporting 750S. Laverda then introduced, in 1970-71, the 750SF with a reworked chassis, improved brakes, better clutch and lightened crankshaft. Whitby’s 1972 SF hosts an international consortium of ancillary components, including German Bosch headlight, Japanese Nippon-Denso gauges, British Lucas switchgear and indicators and Italian CEV taillight.

In the early 1960s when Massimo Laverda and his chief engineer Luciano Zen decided to build a powerful sport bike for the all-important American market, they purchased a Honda Super Hawk to study.

“I started the process by taking the engine completely apart and assessing what the project needed,” Whitby says. “I mostly wondered why the engine had been taken apart.” Answers weren’t readily apparent. There was slight rust pitting in one cylinder bore, and one of the crank journals was stuck. “But that’s more than likely due to the pieces having sat for 30 years in a hostile environment.”

From Laverda Paradise in Germany Whitby sourced all new cylinder head parts, including cam chain, chain roller tensioner, valves and cam bearings. The guides were fine. The crank needed attention, and on advice from Wolfgang Haerter of Columbia Car & Cycle in Nakusp, B.C., Whitby sent his to Mongoose Machine and Engineering in Coquitlam for resurfacing and rebuilding. Engine cases were laboriously cleaned and detailed, not blasted, to preserve the Laverda finish. Mike Briggs at Performance Cycle & Auto in Calgary bored the cylinders to first oversize and Asso pistons were pinned to Carillo rods. “Lots of little engine pieces came from Wolfgang, including the big end bearings and the high-volume oil pump,” Whitby says.

Powder coating and rebuilding the footwork

Before sending the frame, swingarm and centre stand to Top Gun Coatings in Calgary for black powder, Whitby drilled out the old steering head lock; it was plagued by a broken key. Ceriani fork, with 35mm exposed tubes, was rebuilt to stock specification, and rear shocks are from Progressive Suspension. Rebuilt wheels and hubs feature new bearings and chrome spokes; the front Borrani rim was replaced because the original was slightly damaged. Both wheels are outfitted in period correct Dunlop TT100 tires. Whitby sourced the complete stainless steel exhaust system online from U.K.-based www.feked.com.

Nippon-Denso gauges were delicately disassembled, cleaned and detailed with new faces, paint and polish before reassembly. Whitby says: “They’re basically Honda gauges, and it’s a time consuming process to get them apart and back together again without damaging them.” Alberta Plating in Calgary chromed the headlight ears, footpeg brackets and rear brake pedal. The chainguard only needed cleaning, while the stainless steel fenders were dent-free, requiring a simple polish. Originally a dark forest green, Whitby painted the Laverda himself in a punchier 2012 Ford ‘Lime Squeeze’ hue, and reassembled the machine with stainless steel cycle fasteners. Thanks to a Sache Electronics ignition, two mini Dyna single outlet coils and carefully detailed Dell’Orto carbs the Laverda started on the button; “Almost like it was fuel injected,” Whitby explains.

But, as good as it looked and ran when Whitby was done in August 2012 he sold the Laverda to fund more projects. Stay tuned; Whitby’s at work on an AJS and a BMW … it’ll likely never end.