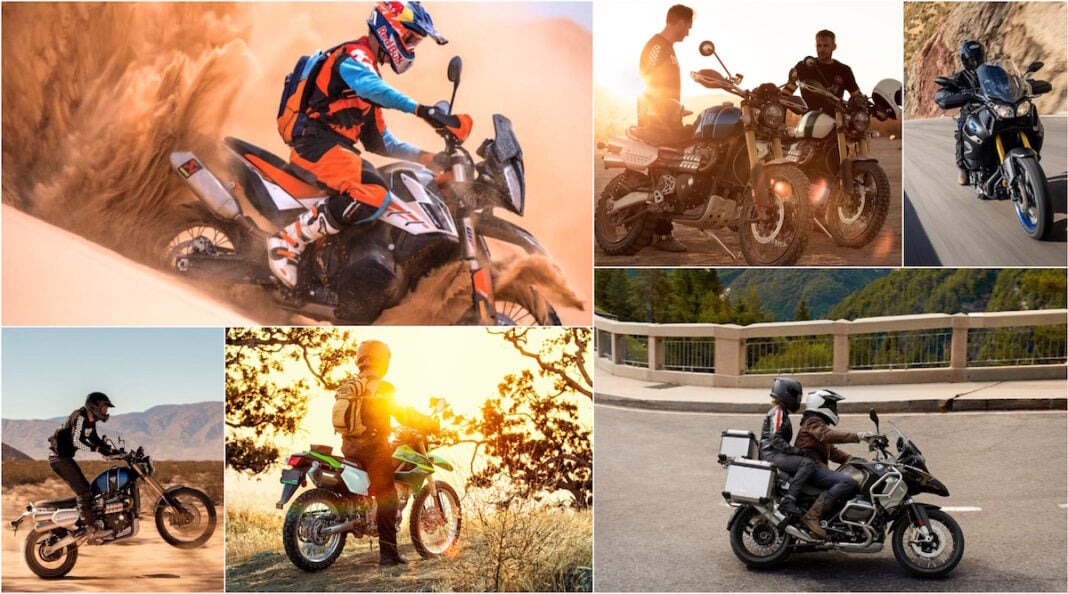 Decades ago, a motorcycle was, for the most part, a street bike. If a rider wanted to venture off the beaten path the only option was to fit tires with a more aggressive tread pattern to give increased grip. Of course, ground clearance would be an issue, but the basic machine had to fill the role.

As motorcycles evolved, specialized machines were introduced for trials and scrambles (or motocross) competition. The next phase saw the rise of smaller-bore dual-purpose mounts made popular by early Japanese models such as the Yamaha DT-1 and Honda Elsinore.

In 1980, however, the first ‘adventure-touring’ style motorcycle hit the market when BMW introduced their R80G/S (for Gelände Strasse, or loosely translated, off-road/on-road). From that point forward, the adventure-touring market steadily grew to the point where today, every major motorcycle manufacturer offers some variant of the concept.

While there are plenty to choose from, here are our top seven selections for 2020:

Perhaps an early originator of the ‘adventure touring’ concept, Triumph first introduced their 650cc TR6 Trophy in 1956. The machine offered slightly increased ground clearance and a mid-rise exhaust pipe and was designed to tackle rougher terrain.

Triumph has captured the spirit of that original Trophy with their modern classic Scrambler 1200 XE. Introduced in 2018 as a 2019 model, the Scrambler 1200 XE is powered by a 1200cc liquid-cooled parallel-twin engine coupled with a six-speed transmission. Final drive is by chain.

The XE features long-travel Showa adjustable front forks that offer 9.8-inches of movement followed by a pair of Ohlins shocks at the rear with another 9.8-inches of travel. With a seat height of 34.2 inches, the Scrambler 1200XE weighs in at 456 lbs. before any gasoline is added to the 4.2-gallon fuel tank.

Unlike the 1956 Trophy with its cast iron drum brakes front and rear, the Scrambler 1200 XE features Brembo disc brakes at both ends, as well as ABS and a traction control system. Triumph maintains this motorcycle is just as happy on the street as it is in the dirt.

Spawned by the success of its Paris-Dakar Rally winning NXR750, Honda introduced a production model ‘replica’ with the XRV650 of 1988. The machine went through a number of improvements but was eventually dropped from Honda’s range in 2003.

However, the concept returned to the fold in 2016 when Honda introduced the CRF1000L to compete with machines such as BMW’s GS1200 and Triumph’s Tiger.

For 2020, Honda has increased the size of its liquid-cooled parallel-twin engine from 998cc to 1084cc. That bumped horsepower from 94 to 101, and torque has increased by six per cent, too. The frame was redesigned and the entire package has been slimmed up and, as a consequence, it is also lighter. Here’s a closer look.

On the Sports model the front forks are inverted Showa with 9.1-inches of travel while the rear mono shock is also a Showa item that gives 8.7-inches of movement. The machine includes ABS, LED headlights and cruise control and is also equipped with four riding modes – tour, urban, gravel and a new off-road mode together with two rider-programmable modes.

Made popular by the television series Long Way Round featuring the exploits of riders Charley Boorman and Ewan McGregor mounted on a pair of R1150GS Adventure motorcycles, BMW’s newest version is the R1250GS Adventure.

While the R1150GS became the R1200GS, the latest iteration was launched in 2019 and displacement was increased by 84cc to become 1254cc. The air/liquid-cooled flat twin engine is rated at 136 horsepower and 105 ft.-lbs. of torque and the cylinder heads feature a technology BMW calls the ShiftCam system.

Depending on throttle input, ShiftCam switches between two sets of cam lobes on the intake camshaft to refine power delivery whatever the riding conditions. Of course, the BMW features shaft final drive, and that means less time spent maintaining a chain.

Wheels feature a more traditional-looking cross spoke pattern while BMW’s unique Telelever front suspension provides 8.3 inches of travel and the Paralever rear a good 8.7 inches of movement. ABS is standard, and the machine features a hill start control that automatically engages the front brake on an incline of five-degrees — this feature can be overridden if that feels like nanny-mode.

More than a few accessories and packages are available for the R1250GS, making the machine almost infinitely customizable.

Highly customizable with large selection of accessories and packages

Another machine that can trace its roots back to the Paris-Dakar Rally, the Super Tenere first saw the light of day in 1983 when Yamaha offered the XT600 Tenere adventure motorcycle. With a 600cc single-cylinder engine, the XT600 Tenere lasted through several design changes for many years.

In 1989 Yamaha then added a twin-cylinder XT750 Super Tenere to the range and that eventually became, in 2010, the XTZ1200Z Super Tenere.

For 2020, the Super Tenere is propelled by a 1199cc liquid-cooled parallel twin cylinder engine complete with traction and cruise control. Yamaha has imbued the Super Tenere with what it calls its ‘D-Mode’ twin-setting throttle — T-Mode is for a gentler form of touring, while S-Mode livens things up for sportier riding.

There’s 7.5 inches of travel at both ends of the Super Tenere and the suspension is electronically adjustable at the push of a button. Cleanliness is assured with the use of shaft final drive. Conveniently, both the windshield and seat height are adjustable, with the saddle able to move from a low of 33.3-inches to a high of 34.3-inches.

Gasoline from the 5.3-gallon tank is delivered to the combustion chambers via fuel-injection and sparks are provided by electronic ignition. Technology on the V-Strom 1050 includes antilock braking and a traction control system with four selectable modes depending on riding conditions, from good, dry pavement to wet and cold roads.

Niceties include a USB accessory slot to the left of the LCD instrument display behind the adjustable windscreen. This USB port is ideal for powering/charging a range of devices.

One of the available accessories is a lower seat that removes almost one inch from the 33.5-inch overall seat height.

If Suzuki adventure bikes are your thing, check out this badass off-road 2002 Suzuki SV650 we featured awhile back.

Middleweight contender in the adventure touring market, KTM introduced its 790 Adventure and Adventure R models in 2019.

These are light and lithe machines, and both are powered by KTM’s 799cc liquid-cooled parallel-twin engine feeding power through a six-speed transmission to the spoked 18-inch rear wheel via chain final drive. The 21-inch front wheel is also laced with spokes.

The difference between the two models comes down to the suspension; the Adventure features non-adjustable WP forks with 43mm tubes while the R version wears the completely adjustable 48mm WP Xplor forks. At the rear on the Adventure the WP Apex shock can be altered only by its spring preload. On the R, however, the WP Xplor shock is full adjustable for rider comfort and conditions.

The KTM frame is designed such that the engine is a stressed member, thus increasing rigidity and lowering overall weight. One aspect of the KTM Adventure that draws good reviews is the low centre of gravity thanks to the position of the 5.3-gallon gas tank that essentially wraps around the frame and carries the bulk of its fuel lower on either side of the bike.

Seat height on the standard Adventure is 33.5 inches while the R measures in at 34.6 inches.

LC8c is the most compact performance engine in the segment

Introduced in 2006, Kawasaki’s entry-level KLX250 gave neophyte riders an opportunity to ride on or off the road. However, in 2014 the carburetor-fed model was dropped from the range, only to return in 2018 with fuel-injection.

Powered by a 249cc four-stroke single-cylinder engine with liquid cooling and a six-speed gearbox, power is transferred to the 18-inch rear wheel via chain final drive.

There’s plenty of suspension travel, with 10-inches in the front and 9-inches in the single-shock rear while overall ground clearance is more than 11-inches. Stopping power is provided by Kawasaki disc brakes front and rear.

Available in lime-green or, for a few dollars extra a camo-grey version, this small-capacity adventure model won’t win any races but is great for getting around town and then venturing a little further afield on light trails or gravel roads.

Greg Williamshttp://gregwilliams.ca/
After graduating from the Journalism program at Mount Royal College in 1995, Greg Williams set out to write about powered vehicles, and more specifically motorcycles – and has been doing so ever since. This isn’t a part time gig for him. Williams has written for every major Canadian motorcycle magazine, and spent ten years with Inside Motorcycles where he penned the Western Perspectives column. He now contributes the New Old Stock column to Cycle Canada, the Pulp Non-Fiction column six times a year to the Antique Motorcycle magazine, and feature articles appear regularly in American Iron Magazine and Motorcycle Classics. His On the Road column runs weekly in the Calgary Herald Driving section and also republished Modern Motorcycle Mechanics — the motorcyclist’s bible. Greg is also the recipient of the Julie Wilkinson Motorsport Journalism Award.
FILED UNDER:
FeaturedMotorcycles