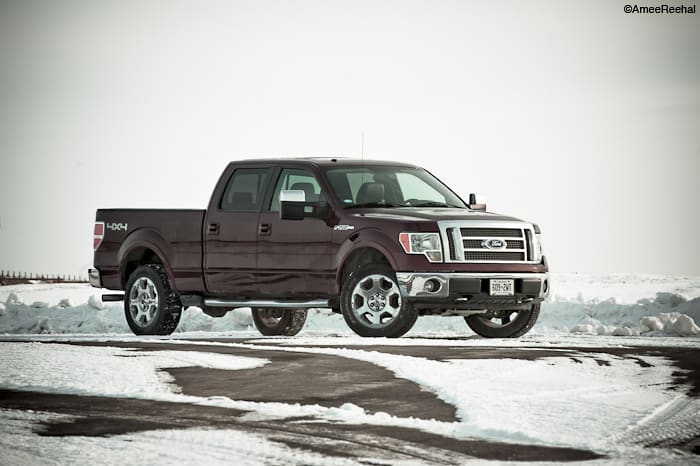 Ford’s most popular F-series model and Canada’s best-selling pickup for four decades straight, sees a considerable list of innovations and upgrades for 2009. Including a lighter yet strengthened frame, a boost in horsepower with an 8-percent average fuel economy improvement, additional cabin space to the SuperCrew model, and even more safety and standard features than the outgoing model.

The all-V8 powertrain lineup is available in three options: the 5.4-litre 3-valve Triton V8 (as tested), the 4.6-litre 3-valve V8, and the 4.6-litre 2-valve V8. The tested 5.4-l Triton produces 320-hp and 390-lb ft. of torque when running on E85 fuel—15-percent gasoline and 85-percent ethanol; providing a 12-percent improvement in fuel economy versus the previous model.

The all-new interior styling sees minimalism with clean lines and stylish touches but still feels bold with large, chunky panels—a mix of styling cues that only Ford seems to successfully pull off. An advanced navigation system, Sirius Satellite Radio, and Ford SYNC provide convenience, while the all-new redesigned seats provide added comfort.
For the SuperCrew model, Ford made huge strides to increase usable space for both utility and passengers, and upon entering the cabin, the vastness is immediately evident, due in part to a 6-inch stretch increasing rear seat legroom and cargo capacity. The new one-touch 60/40 split rear seat allows easier loading/unloading as the mechanically articulated second-row seat flips up and folds against the back of the cab—a one-hand operations that is both easy and convenient while creating 57.6 cu.ft of usable cargo space behind the front seats. Driver visibility is also improved in the SuperCrew by way of longer front doors, thus pushing the B-pillar further back significantly improving peripheral vision. The 2009 F-150 features more advanced standard safety features than any other pickup in its class, including the AdvanTrac with Roll Stability Control and trailer sway control. In addition, the new safety cage built from ultra-high-strength steel receives top safety ratings. Other standard safety features include ABS, SafeCanopy side curtain air bags with roll-fold technology, Personal Safety System, and front seat-mounted side air bags.

Overall, the 2009 F-150 offers toughness and luxury, and plenty of both. The exterior is hard-hitting and bold, while the interior looks and feels more like a sedan! Plus, with all the innovations, increased capabilities, and standard safety features, it’s obvious why the Ford F-150 remains the most capable full-size pickup on the market.