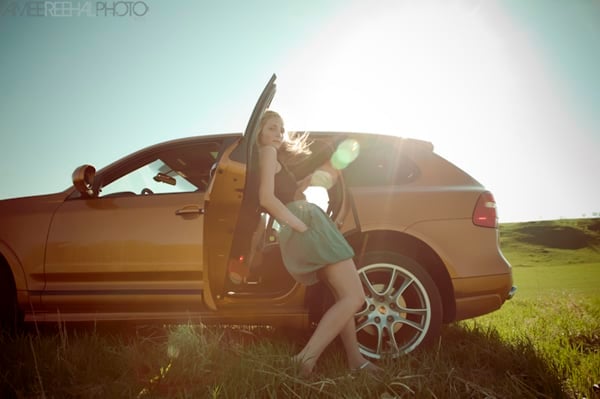 Kicking ass. This is precisely what the Cayenne SUV has been doing since its introduction back in 2002. Despite the naysayers (and there were plenty) who questioned Porsche’s (very late) foray into the SUV segment, the Cayenne has become a flagship vehicle for the Stuttgart automaker. Hey, that’s impressive.
Adding depth to their ass-whooping, Porsche introduced a few variations of the best-selling vehicle, including the entry-level Cayenne (and Cayenne Tiptronic), Cayenne-S, CayenneGTS (and GTS Tiptronic), and the unrivaled, otherworldly Cayenne Turbo-S (replacing the CayenneTurbo last year).
But for now, we’re only concerned with the slick 2009 Cayenne GTS Tiptronic, and if you’re in the market, perhaps you should be too because pound-for-pound, in terms of pure performance, price-point, and enhanced styling, the GTS is arguably the best Cayenne available…with or without the Nordic Gold (orange) Metallic paint.

Propelling this 5000-lb plus rocket is a 4.8 liter V8, putting down a respectable 405-hp and 369 lb-ft of torque—well ahead of the sub-300-hp entry-level Cayenne, yet worlds apart from the 550-hp Cayenne Turbo-S older sibling. But in terms of refined, naturally-aspirated power, the GTS version is a true showcase of Porsche engineering. Slide into the cabin, turn the ignition, and enjoy the raw growl of the V8. It with certainly set the tone, literally, for the ride ahead.
While the majority of GTS’ rolling off the plant floor come with an automatic transmission, a 6-speed manual is now available at no cost. Think about it, a stick shift luxury SUV? That’s pretty damn cool, and rare. Our auto tranny GTS tester came equipped with the 6-speed Tiptronic-S. Paying the premium for the Tiptronic version (opposed to non-Tiptronic automatic) will definitely be a personal choice—some may love it, some may find it more of a novelty. For all the driving enthusiasts, just get the stick shift.

Alright, let’s get the paint colour issue out of the way. Our press CayenneGTS arrived with the $4280 optional Nordic Gold Metallic paint, a.k.a. Orange. Whether cruising down The Red Mile in Calgary, pulling into the grocery store lot, or rolling up to the golf course, this GTS garnered a lot of attention. And the love-hate reaction was almost always the same: ‘love the colour man!’ or ‘are you gay?’ (mind you, the writers dead-on matching golf bag didn’t really help). Fortunately for the haters, others colours are available.
Trivial issues aside, the CayenneGTS exterior styling is simply gorgeous. It exudes luxury, sophistication, and an extra dose of sports appeal, including an aerodynamic body kit with a pair of huge dual tailpipes that look as loud as they sound. And that’s a good thing.

Huge 21” light alloy wheels are standard, wrapped in 295/35 rubber. 13.8” vented rotors with 6 piston calipers occupy the front, with 13” vented rotors with 4 piston calipers in the rear. All mated to a permanent all-wheel drive system. The GTS also sees a 3-mode shock system (Comfort, Normal, Sport) adjusting the damper settings for various driving styles, but Sport mode is the only one that matters folks, because it literally drops the ride, tightens the suspension, and opens up the dual-exhaust pipes producing serious noise. Of course, the GTS sees a plethora of other technologies including Porsche Traction Management (PTM) and Porsche Stability Management (PSM), to name a couple.

The cabin is roomy, comfortable, and very black (black leather interior is an extra $4440). Overall, a great balance of sporty styling and luxury. The 12-way power adjustable leather front seats are snug and well-bolstered, while the 3-spoke multifunction leather steering wheel is fairly big yet feels good in the hands. Forking out the extra $2310 for the Bose Surround Sound System and another $4500 for the Porsche Multimedia System with navigation are wise choices. Some may find the centre console clean and uncluttered, while others may feel unimpressed, expecting more gadgets and stuff. But one thing is evident: the touch screen is nestled fairly low in the console (perhaps move the vents and raise the screen higher?).

Despite the dismal economic environment, Porsche is holding it’s own in Canada. Recent figures show an overall dip in Porsche sales this past year. Yet the company’s flagship 911 and Cayenne models continue to do well, carrying most of the weight. In fact, Porsche’s Certified Pre-Owned (CPO) sales are actually higher, reaching an all-time single month record with 76 CPO vehicles sold in May 2009.

The CayenneGTS new sales were down almost half in May 2009 compared to May 2008, but over the year, GTS sales were down by a reasonable 20%. So despite the auto industry’s current state with all the bailout shenanigans, the Porsche Cayenne continues to plow through the shit storm.

In Canada, the entry-level Porsche Cayenne Tiptronic remains the manufacturer’s top-selling SUV (starting at $60,190), followed by the CayenneS. While the GTS Tiptronic sits third, with a base price of $91,090 CDN, it is perhaps the best of the bunch, in terms of best bang for the buck. It’s priced a good $60k less than the expensive Turbo-S, yet worth every penny more than the step-down V8 powered CayenneS with 20 less horses and no cosmetic enhancements. Kick-ass, differentiated styling and raw power. What else does one need?