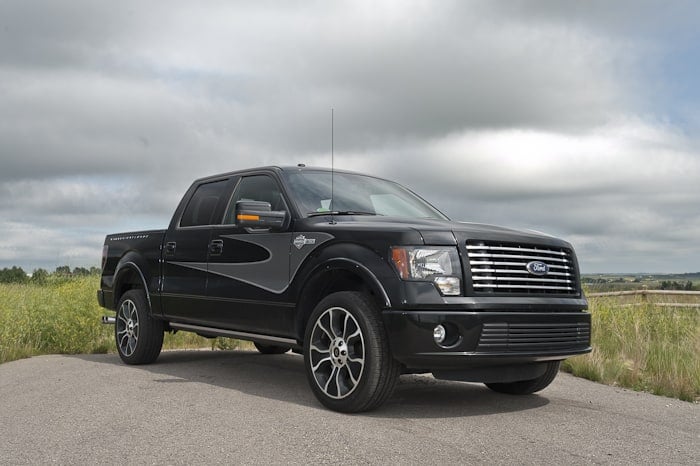 Power, Capability, and loads of Style, we review the 2012 Harley-Davidson Ford F-150 4×4 Supercrew

Are you seriously considering a truck? On the fence? Check out the 2012 Harley-Davidson Ford F-150 and you’ll likely take the plunge. I’m not talking a hay-barrel moving, construction-site-guy hauling, get-shit-done type of truck like in those commercials (mind you, this Harley edition F-150 can certainly accommodate such tasks). More so, the suburban dad, look-cool-dropping-kids-off-at-soccer type of truck. Or simply, an F-150 pickup for a guy like me who spends more time schlepping weekend recyclables and useless IKEA stuff than ATVs and farming equipment. Point being, if you’re in the market for a rare, attention-grabbing pickup but don’t intend on really towing or daily hauling, the Ford F-150 is the ideal truck, and the Harley-Davidson F-150 is even better. Much better. Frankly, the few guys I know who own the Harley-Davidson edition F-150 spend more time transporting boxes of wine and scotch than logs and sod.

if you’re an F-150 fan, thank the Harley-Davidson version for some notable firsts, including larger 20-inch and 22-inch wheels

Following my week-long test with this 2012 Harley-Davidson Ford F-150, I think I’ve officially come to the realization that I’m a truck guy–as a true Albertan non withstanding. With ample power, towing confidence when needed, distinct styling, a luxurious cabin rivalling any sedan, and a spacious cabin, to name just a few features, renders the 2012 Harley-Davidson Ford F-150 a pickup to pursue. Powered by a standard 6.2-litre V8 engine, the 2012 Harley-Davidson F-150 makes 411 horsepower and 434 lb.ft. of torque, coupled with trailer towing capacity of 7500 pounds/3400 KG. This burly engine utilizes big-bore architecture, and for the first time in an F-Series, also now finds superchargers. All mated to the six-speed automatic overdrive transmission. SelectShift Automatic transmission is now standard; a bonus for those who desire more control of the transmission gear selection. Also standard, 2-speed automatic 4X4 system and an integrated trailer brake controller.

Benefits of this 6.2-litre V8 powerplant include SOHC valvetrain with roller-rocker shafts; dual-equal variable cam timing; two spark plugs per cylinder; and dual knock sensors on each bank of the cylinders of the V8 allowing each one to be individually optimized.

The special edition Harley-Davidson F-Series trucks are renowned for taking an already reputable truck and making it better. In true Ford fashion, this often entails innovation and the 2012 Harley-Davidson Ford F-150 is no exception.

New for 2012, the Harley-Davidson F-150 finds new graphics on the exterior bodyside done in a slick snakeskin texture. Personally, I’m not a fan of typically gaudy OEM graphics, however, the graphics found on the sides of this press truck are both subtle and stylish. Mike Massara, the F-150 program manager at Ford, puts it best: “The graphic flows and accents the design curve of the truck, yet brings the texture of the snakeskin into the vehicle, which is something that’s very difficult to do.” Also new, 22-inch machined-aluminum wheels with painted accents and unique centre caps. Ford is also now offering a new Tuxedo Black and White Platinum Tri-Coat paint option. The bold front fascia stares you in the face, sporting a six bar billet-style bright chrome grille adorned with the Harley-Davidson chrome badging. At first glance, it’s evident the special edition Harley F-150 is in a league of it’s own, sporting a lowered appearance with a standard, fully integrated deployable running boards. Once the door is opened, these running boards pop out below…arguably the coolest feature on this truck, and again, a Ford F-150 first never before introduced. Several times, these deployable running boards smacked my shins, forgetting they even exist in a rush to get into the truck. Serves me right.

Inside, the 2012 Ford Harley-Davidson F-150 finds customized details the proletariat F-150 owner would envy. Including seats and centre console lid featuring handmade cloisonne badges produced by the same folks making badges for Harley-Davidson motorcycles. Once you slide into the cabin, the large, gleaming console lid HD emblem is evident; below it, a laser-engraved VIN and build number. My Harley F-150 rolls off the production line as #00514. This console lid, along with the upper steering wheel, find the snakeskin leather. Interior panels are covered in high-gloss Tuxedo Black paint. Taking this customization further, all interior chrome surfaces feature satin finish while the seats are premium snakeskin leather-trimmed and adorned with the unique Harley-Davidson cloisonne badges.

At first glance, it’s evident the special edition Harley F-150 is in a league of it’s own, sporting a lowered appearance with standard, fully integrated deployable running boards. Nestled between the tachometer and speedometer is a small info screen navigated via a five-way button on the steering wheel, allowing driver to quickly and conveniently toggle through various menus including fuel economy, tire pressure info, towing performance, etc….a well-designed, easy to navigate feature. A 4.2-inch LCD screen is also standard (the combination of this touch-screen and buttons and dials below it, in my opinion, is much better than Ford’s MyTouch with the all-touch screen capability). The 2012 Harley-Davidson F-150 also finds standard voice-activated navigation, integrating other features including voice-recognition destination entry, climate-control, and SiriusXM satellite radio, to name a few.

Learn more about the Ford F-150 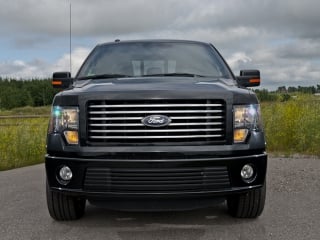 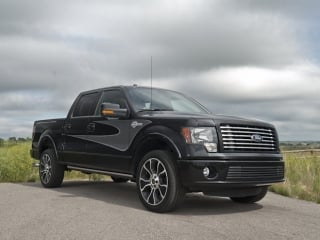 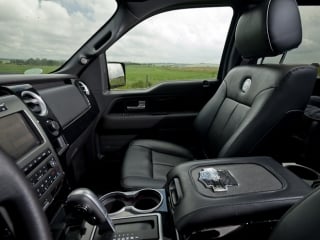 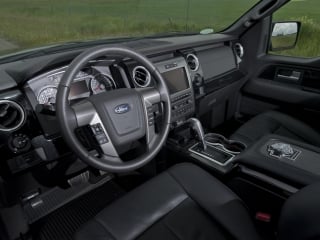 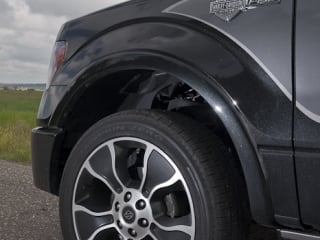 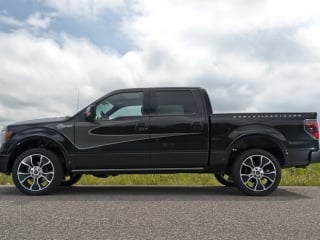