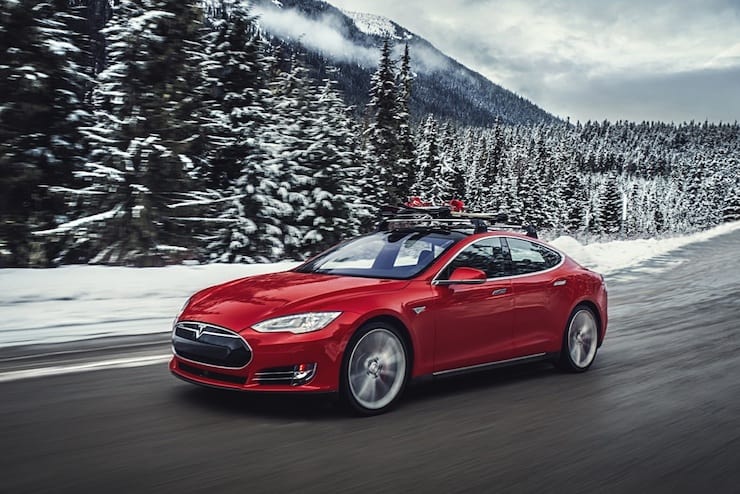 Your head is snapped into the headrest, your blood rushes to the back of your skull, and a rush of endorphins are circulated throughout your body. This is then followed by a huge grin and an exhale of laughter. This may sound like the latest thrill ride at Six Flags but it’s not – It’s the cycle of emotions that the Tesla Model S P85D offers when it makes its run to 60 MPH in 3.1 sec, all without burning a drop of gas.

The Model S P85D which we will just call the P85D  from this point on is the latest flagship sedan from electric car maker Tesla. From the outside, the P85D looks like any other Model S, it’s what’s under the car (not hood) that makes all the difference. The D in the P85D stands for dual. Along with the super high performance rear motor that puts out 470hp, there is now a motor in the front that provides an additional 221hp giving you a grand total of 691hp and to manage all that crazy power, you now have AWD.

The star of the show really is the performance of this electric rocket but it would really be a disservice if I didn’t tell you how practical the car is. The first thing that people notice on the Model S is the giant 17” screen. With an included 3G data connection, you can use it for everything from ordering lunch, to plotting your next road trip. I especially liked the internet radio where you can pretty much ask it to search for any song and play it. The interior materials look and feel first rate yet don’t quite seem on par (yet) with it’s competitors like the Mercedes S Class and BMW 7 Series but are very simple and modern looking. There is no shortage of storage space in the Model S. You have the front trunk or frunk, which is a little reduced on the P85D because of the placement of the additional front motor, you have the huge hatch in the rear and seats that fold down giving you minvan like cargo space. I’ve even heard of people using their Model S to sleep in. It’s the perfect camping tent and the best thing, you can set the climate control to provide you a cozy sleep. As mentioned, the acceleration is blinding, borderline scary. The P85D also handles very well especially considering its almost 5000 lbs. The batteries are low slung in between the 2 axels providing for a very low center of gravity. The result – Slot car like characteristics. It’s like driving the car on a cable. You point it where you want it to go, and without any fuss or wind up, it just end up there. I’ve driven many high horsepower cars as well as electric cars but nothing will prepare you for the P85D experience. I’m not saying its better than driving the Audi RS7 or Charger Hellcat, it’s in a class of it’s own, for now that is. The P85D has an ideal range of around 400 km’s so range anxiety is non-existent. In real world driving with an abnormal amount of hard launches, the computer calculated my real range to still be over 350 km’s. My estimate for cost of fill at my house – About $6. Now that’s incredible. Don’t forget, if you want to plan a long distance road trip, you can use Tesla’s vast coast to coast Super Charging network that can top off your battery in as little as 20 min and it’s free for all Model S owners.

From the outside, the P85D looks like any other Model S, it’s what’s under the car (not hood) that makes all the difference. The D in the P85D stands for dual.

All new Model S’s are now equipped with the Tesla Auto Pilot. They system consists of long range radar, cameras and 360 degree sonar. With this system, the Model S will be able to perform tasks like auto parking and semi autonomous driving. Although all the cars are equipped with it, many of the features have not been enabled yet. In time, Tesla will add the updates over the air as they do many of their updates now. In the past, owners have waken up to an updated car that produce more power and even more performance. If this is the future, I think I could get used to it.

Customer satisfaction and short term reliability surveys have been excellent so far with the Model S. My only question though is about long term reliability. The Model S is still a very new car so it’ll be interesting to see how long the battery will last and how well the rest of the car holds up.

This car offers almost everything. Blinding acceleration and performance, AWD handling, safety, long range battery and everyday practicality. With it’s leading edge technology though, it doesn’t come cheap as you would imagine. The Tesla Model S starts at $87,200 and this P85D version starts at around $120,000. Depending which province or state you live in, there may be some government incentives and rebates to help you get into an electric car.