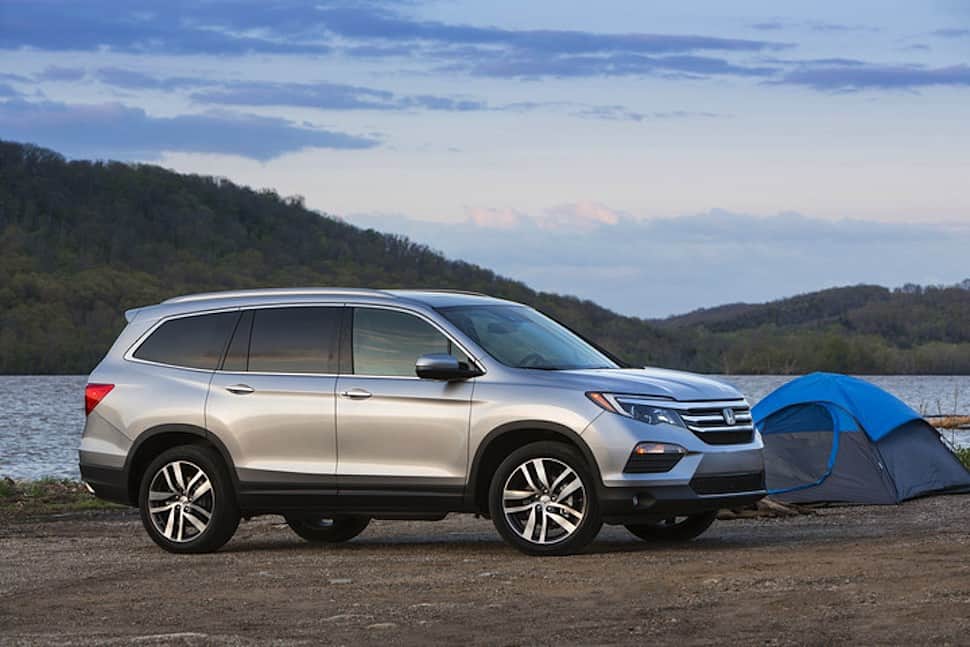 Since 2002, the Honda Pilot has been a utility option for families across North America, adapting along the way. Entering it’s 3rd-generation, Chris Chase spends a week with the assimilating 2016 Honda Pilot.

Human beings are adaptable creatures, possessing the ability to adapt, both mentally and physically, to a wide range of circumstances.

Until recently, if you were a die-hard Honda loyalist looking for a crossover with three rows of seating, you’d have been grateful for that adaptability: the outgoing version of that brand’s Pilot model was an outdated design, smaller and less-sophisticated than its key competitors, and largely devoid of the innovation Honda fans have come to expect from the company. But the Pilot did some adapting of its own for 2016, and the result is an all-new vehicle that’s larger, more attractive, and more practical than its predecessor.

Notably, gone is the old car’s boxy body, replaced with a sleeker one that better identifies it as a contemporary of popular competitors such as the Nissan Pathfinder, Toyota Highlander, and Chevrolet Traverse.

Behind that slicker front end are mechanical innovations that include a nine-speed automatic transmission and a new V6 engine that, despite the same 3.5L displacement as the old Pilot’s motor, is all-new and features direct fuel injection.

That direct injection system helps the new engine generate 30 hp and nine lb-ft of torque more than the old one, significant increases that put the Pilot in the meat of its class, with 280 hp and 262 lb-ft. On the road, that extra power mostly translates into improved high-end performance, with the motor pulling strongly from about 3,000 rpm right up to its 6,750 rpm redline. If you like interesting mechanical soundtracks, you’ll be pleasantly surprised by the change in engine noise when its variable valve timing system switches from the economy-minded programming it uses in normal driving to a more aggressive setup that keeps it from running out of breath at higher revs. In harder driving, the nine-speed transmission does its part with tightly-spaced ratios that keep the engine in the core of its power band. This translates into a busy feeling in normal acceleration, as it shuffles up through those ratios and settles the engine down just below 2,000 rpm at 100 km/h.

This transmission isn’t always great at doing its work transparently, though. Here and there during our week with the car, it seemed indecisive, and the resulting rough shifts were out of character with what we expect from a big, family-oriented crossover. As much as continuously variable transmissions can be dull to drive, we couldn’t help thinking one of those might have been a better fit here; Nissan likes that idea just fine, if its Pathfinder is an indication.

The touchy throttle tip-in was off-putting, but we were less bothered by the firm ride, which gives the Pilot the driving feel of a smaller vehicle. More impressive, overall, is the Pilot’s interior design. The driver and front passenger get a spacious environment created by a low centre console and push-button transmission controls. While we prefer an actual shift lever (mostly for something to rest our right hand on), we can’t complain about the lack of one here. Other nice touches include a gauge cluster centred around an easy-to-read digital speedometer, and a large trip information display. Our tester had heated second-row captain’s chairs in place of a standard three-place bench, and the three-seat third row found in all Pilot models. As much as we liked the front seats here, the second-row chairs are the place to be, with wide, soft cushions.

Most surprising is a livable third row, with enough legroom for adults shorter than about five-foot-seven, and lots of headroom. One compromise is a bottom cushion set low to the floor to keep heads from brushing the headliner; the other is that some second-row legroom was clearly sacrificed to create that usable third-row seat.

Cargo space is, naturally, limited with the third row in place, but we liked the adjustable cargo floor, which can be set a few inches lower than the surface created by folding the third row down. This was great for keeping smaller cargo from sliding around on that vast surface. Our Touring model tester had a power tailgate that frustrated us for its unwillingness to operate except under very specific conditions: if the car was running, only the dash-mounted button would work, and only if the car was in park. The exterior release on the tailgate itself would only work for us when the car was turned off.

Along with the new Civic — also completely redesigned for 2016 — the Pilot shows this well-respected automaker is once again looking for ways to set trends, even if it has had to follow a few to bring its mid-size crossover up to speed. It’s far from perfect in our eyes, but the Pilot hits most of the right notes in terms of practicality. With this new design, the Pilot has done more than adapt: it has evolved into exactly the kind of vehicle many families now seek.