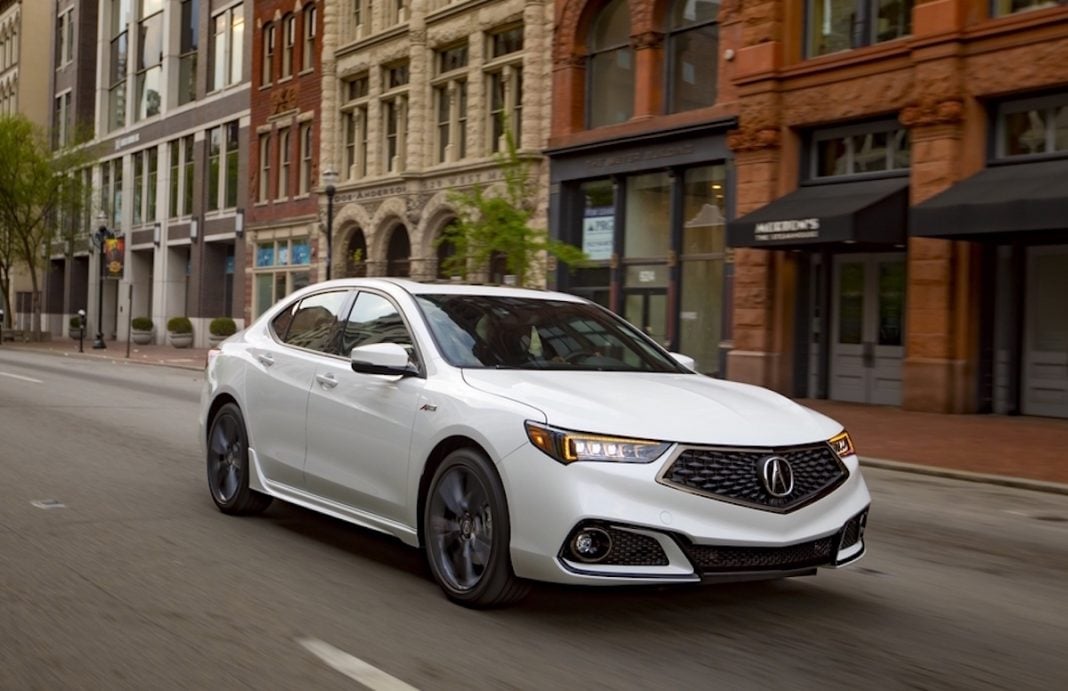 New for 2018, the 290-hp A-Spec TLX is a sportier, more aggressively-styled version of Acura’s mid-size sedan adding a performance-oriented package including bolder bolstered sport seats, a stiffer suspension and a quicker steering ratio. But is a half-baked update enough in a sea of sport utilities?

North American new vehicle sales continue to climb. In Canada alone, Consumers bought more than two million new vehicles in 2017 to help the auto industry set a record. But cars make up a smaller percentage of those sales with every year that passes.

The mid-size Acura TLX is a good example: It sold well following its 2015 introduction (when it replaced the TL) but has since seemingly fallen off the radar of luxury-sedan shoppers, a situation Acura hopes it can reverse with refreshed styling and a new trim level for 2018.

The standout among the styling changes is a new mesh grille first seen on the Acura Precision Concept shown at the 2016 Detroit auto show. It replaces the unloved silver shield that defined Acura’s styling for the better part of a decade.

Our test car came wearing that new nose and was dressed up in the TLX’s new-for-2018 trim, a performance-oriented package called A-Spec that adds aggressively bolstered sport seats, a stiffer suspension and a quicker steering ratio. The new look does the TLX good, the grille’s mesh elements appearing to converge on the Acura logo at its centre. Acura has tweaked this sedan’s handsome — if rather anonymous — body elsewhere, too, but this is not an extensive redesign.

Hop into the driver’s seat, and those bigger side bolsters are immediately obvious. Slim drivers and front passengers will find the most comfort here, with the suede upholstery between bolsters adding to the seats’ ability to hold a body in place in aggressive cornering.

The tauter suspension and quicker steering make a difference too, lending the TLX right-now steering feel. Combine that with Acura’s strong V6 and its excellent Super Handling all-wheel drive system, which shifts power to the outside rear wheel in corners, and you’re treated to an entertaining drive when you’re in the mood.

But what makes the TLX A-Spec a lot of fun on a deserted back road can get annoying in daily driving, particularly if your commute involves highway cruising, stop-and-go traffic and city roads torn up by winter frost heaves and snowplow damage. In those situations, the steering requires frequent corrections and the firm suspension translates into a choppy ride. We have to give Acura credit for the work it has done to tame the shift-quality problems that dogged this nine-speed automatic at its 2015 introduction: In our car, it pulled off smooth, crisp shifts every time.

…while Acura has made the TLX better-looking and more entertaining to drive for 2018, it’s a half-baked update that shows Acura is ready to forget about this sedan—just like so many new car buyers have already done.

But we do wish Acura had given more attention to the TLX’s interior. Far from being an unpleasant space, it simply feels dated thanks to a low-resolution navigation system and a two-display infotainment setup that puts some functions on a touchscreen and others on a secondary screen controlled using a dash-mounted dial. It takes more than a week-long test drive to figure out which one houses the controls you’re looking for.

The small rear seat is another disappointment, especially in a car based on the last-generation Honda Accord, which boasted interior space to rival full-size cars. The A-Spec trim is a C$2,500 package that can be added to Tech and Elite models in both four-cylinder/front-wheel drive and V6/AWD forms, and it’s an effective addition if you’re after a sharper drive than the already-quick V6-powered TLX (we’ve never been impressed with the four-cylinder model).

But while Acura has made the TLX better-looking and more entertaining to drive for 2018, it’s a half-baked update shows that Acura is ready to forget about this sedan—just like so many new car buyers have already done.

Specs and Pricing for the 2018 TLX A-Spec