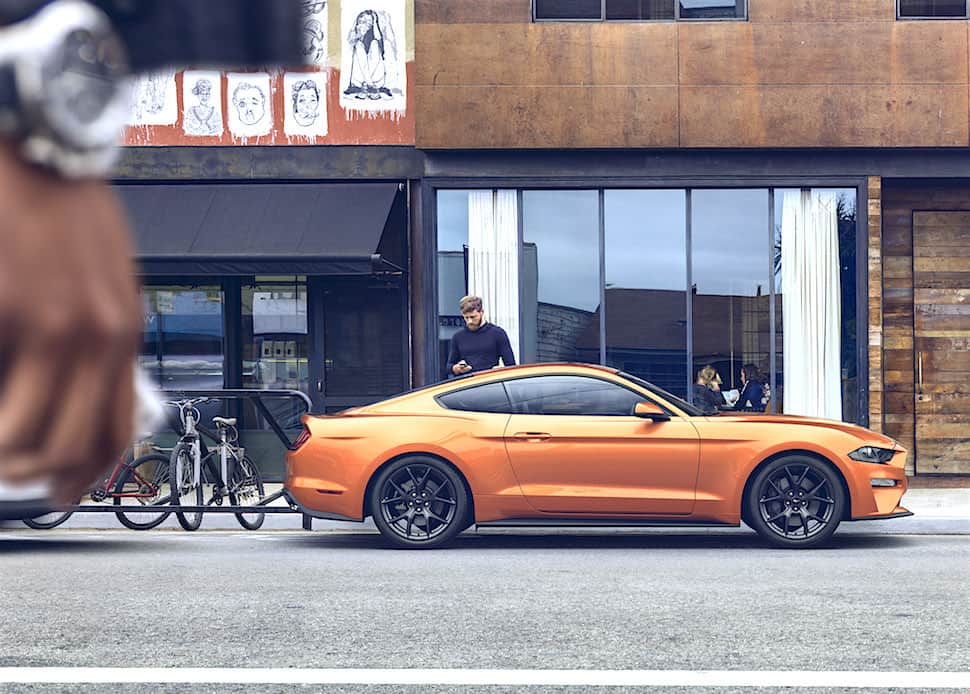 Editor’s Note: All photos of the 2018 Mustang EcoBoost with Performance Package, as tested here

Mention the Ford Mustang to a casual observer of the car industry and you can almost guarantee their first question will have something to do with that car’s decades-deep heritage as a muscle car best known for V8 power and straight-line performance.

Understandably, those casual car fans tend to be surprised (or is that disappointed?) when they learn the Mustang is now available with a four-cylinder engine and has added sports-car cornering abilities to its resume.

Those changes came as part of a 2015 redesign that brought the Mustang into its sixth generation. The base engine is now a 2.3L turbocharged four-cylinder, and that newfound cornering ability is partly the result of this model’s first-ever independent rear suspension.

Without the GT trim’s V8, there’s no boomy exhaust sound. And, in fact, some of what you do hear in the Mustang Ecoboost’s (as Ford refers to the four-cylinder version) cabin is a synthesized version of the engine’s sound that is played through the stereo speakers. If you want the real deal, roll the windows down: the exhaust note actually sounds okay when you get to hear it firsthand.

The turbo four-cylinder generates 310 hp and 350 lb-ft of torque, a big deficit next to the GT V8’s 460 hp and 420 lb-ft. And yet, the four-cylinder is actually more powerful than the GT trim’s V8 was 10 years ago, and it’s certainly strong enough to deserve its place under the Mustang’s hood.

Ford says the Ecoboost engine’s torque peaks at 3,000 rpm, but there’s useful power available below that, too. It takes an aggressive right foot to unlock the car’s full potential — it will happily lay down rubber and do a decent power slide — but that’s okay with us, as it makes the Mustang a friendlier daily driver. Our tester came with the six-speed manual transmission that’s part of the standard package. It’s a good fit for this car, with the pleasant mechanical feel the shifter and clutch deliver to the driver who’s willing to do their own shifting. For those not into it, there’s the option of a 10-speed automatic.

The car we drove was also fitted with a performance package whose notable upgrades include stronger brakes, grippier tires, and a sharper suspension tuning that was still compliant enough to be comfortable on city streets.

This option easily lets the chassis keep up with the Ecoboost engine’s performance: charging down some of our favourite back roads, we ran out of guts before we came close to this car’s handling limits.

Ford’s fuel consumption estimates for our test vehicle (including that performance package) are 11.8/8.4 L/100 km (city/highway); we saw a real-world average of 12.4 L/100 km in a mix of city and highway driving.

Hardcore muscle-car fans may be unimpressed by this kinder, gentler expression of performance, but we can get behind the Mustang’s satisfying manual transmission, the turbo four-cylinder’s decent torque and, of course, this engine’s thriftier fuel economy.

The Mustang may be designed to evoke an era when cars (and especially sports cars) were straightforward machines, but modern times demand up-to-date technology. Along with a digital gauge cluster and drive modes that tailor performance to racetrack and drag strip environments, our test car was optioned with Ford’s Sync 3 infotainment system and an electronic suspension that adjusts ride settings based on the drive mode selected. The digital gauges and Sync touchscreen (which houses audio, navigation and redundant climate controls) were among the few aspects of the Mustang’s interior we’d call modern-looking, while the rest of the dashboard is strictly functional.

Like us, you might be glad backup cameras are now mandatory in Canada, as the view rearward is not great, and small side mirrors made us appreciate our test car’s optional blind-spot monitor.

Otherwise, the only disappointment to us (as fans of cars that are both practical and quick) is the Mustang’s small back seat, which is unusable if those riding up front are anything resembling tall in stature.

Hardcore muscle-car fans may be unimpressed by this kinder, gentler expression of performance, but we can get behind the Mustang’s satisfying manual transmission, the turbo four-cylinder’s decent torque and, of course, this engine’s thriftier fuel economy. This ain’t your father’s sports car, and you know what? That’s a good thing. Chris Chasehttps://chrischasescars.com/
Chris has been writing professionally about cars since 2004, in print and online. He lives in Ottawa with his wife and two feline tyrants. In rare quiet moments, he can be found travelling or playing one of his way-too-many guitars. Chris is also a journalist member of the Automobile Journalists Association of Canada (AJAC).
FILED UNDER:
Ford CoupesFord Mustang Reviews & News