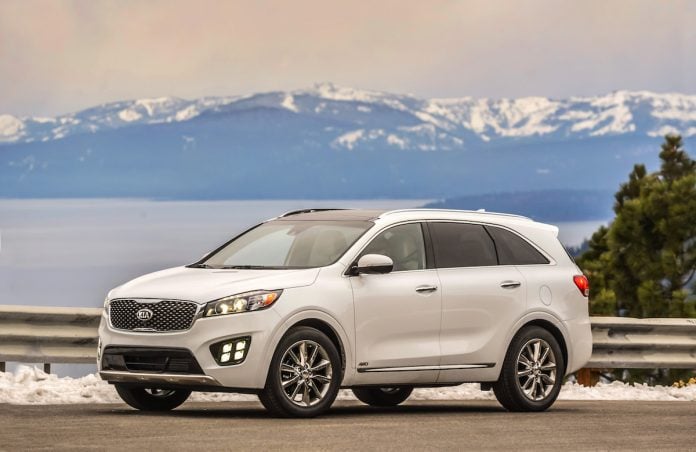 Can a Kia SUV Go Toe-to-Toe with the Germans?

Upscale crossovers are a big deal these days, even when they come with a non-upscale price tag. That’s been Kia’s MO with its largest vehicle, the mid-size Sorento, since a 2016 redesign that surprised us in ways we didn’t expect.

We don’t get too excited about driving a car that’s already been on the market for nearly three years (especially given that Kia supplied us with a 2018 model just as it was rolling out a refreshed 2019 Sorento we review here), but it’s always interesting to see how a vehicle has aged through its first few years on the market, particularly one that wowed us the way this Sorento did at its debut.

The Sorento’s handsome exterior might make other people think you spent a lot of money, and that’s good if you ponied up for the nearly C$50,000 Kia asks for our SXL-trimmed tester. At that price, you get an interior fitted with a slick driver-configurable gauge cluster integrated into a dashboard assembled from quality materials that would look at home in a BMW X5 or Audi Q7. If safety is important to you, Kia also loads up the Sorento SXL with a 360-degree exterior camera setup, rear cross-traffic alert, blind-spot detection, lane-departure warning with lane-keep assist, and front-collision warning with automatic braking.

We don’t get too excited about driving a car that’s already been on the market for nearly three years…but it’s always interesting to see how a vehicle has aged through its first few years on the market, particularly one that wowed us the way this Sorento did at its debut.

While the 3.3-litre V6 engine in our tester is the more powerful of the pair on offer, that’s not why we like it. Instead, it appeals for its smooth soundtrack, the seamless way it delivers its power and a relaxed feel that fits well with the upscale atmosphere Kia has created for high-end versions of the Sorento.

New since the last time we drove this vehicle is an eight-speed transmission whose primary aim is to reduce fuel consumption, and it succeeded: our city driving average was 12.7 L/100 km, a much better result than the 14.7 we saw in the 2016 model we tested. The Sorento may offer better value in its top-end trims than European luxury models, but you’ll be disappointed if you expect to find the same kind of handling. Instead, a cushy ride, light steering and a soft brake pedal all contribute to a relaxed driving character.

You can get a more interesting drive for similar money in a Honda Pilot, whose firmer suspension lends that crossover a sportier feel. But while its Touring trim boasts a list of features similar to the Sorento SXL’s, the Honda is about $3,000 more expensive.

Mazda has another notable entry here with a 2019 CX-9 whose torquey turbocharged engine promises better fuel economy. It’s smaller inside, but is a better match price-wise when equipped similarly to our Sorento SXL tester.

Chevrolet, supposedly a bread-and-butter brand, has even bigger aspirations with its new Traverse, whose price reaches $55,000 before it’s equipped to match the top-end Sorento.

Three years ago, Kia surprised us with what was then one of the most impressively executed mid-priced crossovers you could buy. A number of other very nice utilities have joined the market since then, so the big surprise now is that there are still so few that can challenge the Sorento’s excellent value.