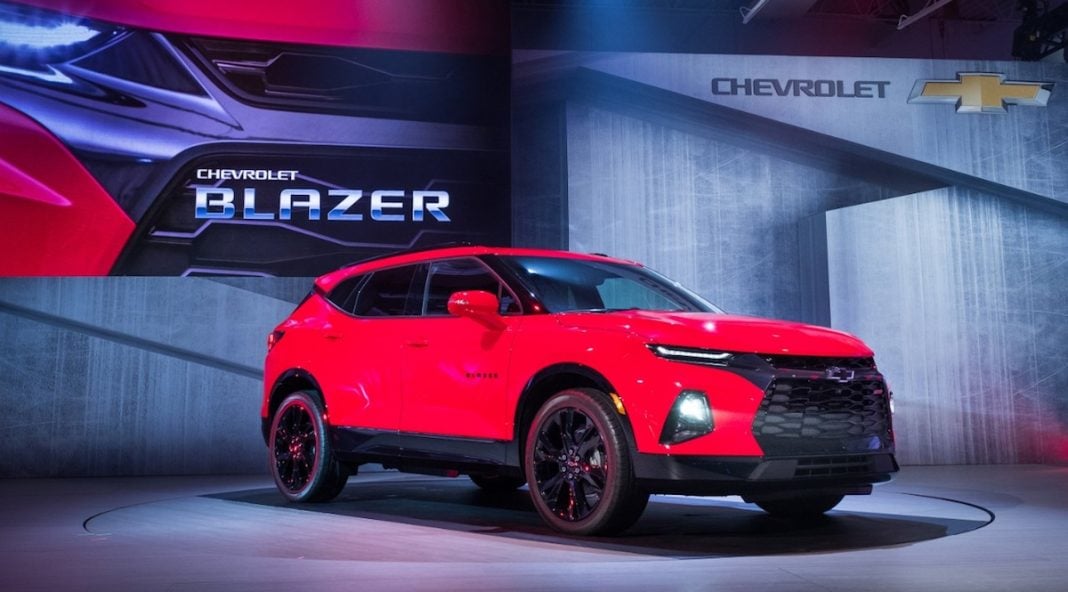 Atlanta, GA – We knew the new Chevy Blazer was coming. And had a hunch the styling would be a huge departure from what we’d expect, considering we haven’t heard the Blazer nameplate since 2005, and that GM is on a tear completely revamping their SUV and crossover lineup with sleeker-looking, tech-focused offerings. We were right.

The mid-size 2019 Chevy Blazer will arrive early next year, slotted between the small Chevy Equinox and the larger Chevy Traverse. It’s bold, sleek, and frankly looks like a Chevy Camaro in and SUV guise – and that’s definitely not a bad thing – sporting a strong front grill and brawny proportions.

As Chevy puts it, “It looks commanding on the road, while fulfilling the promise of versatility at the heart of every Chevy crossover and SUV.”

And that front grill in huge paired to those skinny, low-placed HID headlamps similar to the Camaro and some recent Jeep crossovers as well.

Available in either sportier RS or more luxury Premier trims, the new 5-passenger Blazer will come with a Chevy-first cargo management system with a rail system and cargo fence; there’s no removable roof like Blazers of the past, replaced now by an available panoramic dual-pane power sunroof.

The standard 2.5L will only produce 193-hp and 188 lb-ft of torque, while the 3.6L V6 ramps it up to 305-hp and 269 lb-ft of torque; both direct-injected engines feature intelligent stop/start technology that seamlessly shuts off the engine when power is not needed.

But as the Chevy Blazer’s chief engineer puts it, “Both the Ecotec 2.5L four-cylinder engine and 3.6L V-6 engine are paired to Chevrolet’s nine-speed automatic transmission, providing drivers a great balance between performance and efficiency.” We’ll review the new Blazer ourselves and provide our own feedback on this. What others are saying about the New 2019 Blazer:

General Motors finally gave us our first look at the 2019 Chevrolet Blazer at an event in Atlanta, but unlike the Blazers of the past, this one is not a body-on-frame SUV, or a two-door, nor does it have a removable roof. Instead, it rides on the same C1 architecture as other car-based crossovers including the Cadillac XT5 and GMC Acadia. – Alisa Priddle, MotorTrend

The black grille and trim of the RS look almost sinister, but even in bright chrome on the Premier trim, looks striking. Other model grades will have unique trim to help set each one apart. – Evan Williams, Autotrader.ca