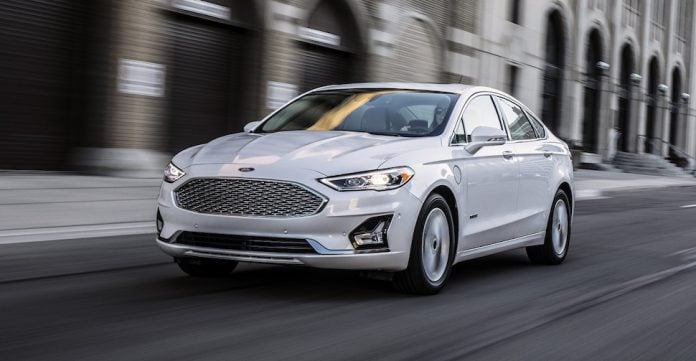 There are a number of cars that can be classified, accurately enough, as transportation appliances, but it doesn’t get much more appliance-like than a family sedan that you plug in when parked.

Among the oldest cars on the market now that you can plug in to charge is the Ford Fusion Energi. It’s a PHEV (plug-in hybrid electric vehicle) belonging to a family of Fusion models that, since 2013, has also included conventional gasoline powertrains and a regular hybrid model.

What is the difference between the Fusion Hybrid and Energi?

The Energi differs from the regular Fusion Hybrid for its plug-in function, which charges the battery and promises about 40 km of all-electric driving range — an increase of about one third — thanks to a new battery for the 2019 model year.

That’s the last update the Fusion Energi will receive. After this year, the entire Fusion sedan lineup will disappear as Ford expands its crossover and SUV model range.

How long does it take to charge Ford Fusion Energi?

If you have access to a 240-volt charger, charging the Fusion Energi takes about 2.5 hours. Charging time increases to about seven hours when connected to a standard 110/120-volt outlet.

The Fusion Energi’s new battery still takes up about half the trunk. The rear seat still folds down, but all that does is open a narrow slot between the battery and the parcel shelf. There’s room to slide in a few two-by-fours, and that’s about it.

Otherwise, the Fusion Energi’s interior is the same as any version of this car. The cabin is more snug than in competitors like the Honda Accord and Toyota Camry, both of which were redesigned last year. Blame that on the fact Ford has only made cosmetic updates to the Fusion since 2013.

Our test car came dressed in top-end Titanium trim. The front seats feel narrow and rear-seat headroom is not especially generous, traits that seem out of place in a $40,000 family sedan. The Fusion makes up for those shortcomings with styling that still looks good despite receiving only incremental changes over the last seven years.

Fusion Energi is a calm and quiet driver. It’s not especially fast, but with a charged battery the electric motor does all (or most) of the work. That helps keep engine noise down, or eliminate it completely. In full-electric mode, the gas engine will come on if you request quick acceleration.

Handling is competent for those moments when you want to carry some speed into a corner. Our biggest complaint about how the Fusion Energi goes down the road is the effect the weight of the battery has on ride quality. Over wavy pavement, the rear end floats and bobs, detracting from the Fusion’s otherwise well-composed chassis.

In Canada, after a week of cold-weather driving, using the car’s electric mode whenever we could, we got a fuel consumption average of 3.5 L/100 km. Ford’s ratings are 5.5/5.7 L/100 km (city/highway) when the Fusion Energi runs as a regular hybrid, and 2.4 Le/100 km in electric mode.

US drivers can expect an EPA-Est. MPGe 109 City / 97 Highway, according to Ford figures.

If you use the Fusion Energi primarily for commuting and have access to 240-volt charging, it’s quite possible you’ll rarely need the gas engine.

There’s also the SYNC infotainment system, which is nicely sorted, responsive and easy to use.

Takeaway: Is the Ford Fusion Energi worth it?

In the US, the Energi comes in one trim: the top-end Titanium starting at US$34,595.

Among the Fusion Energi’s competitors is the Honda Clarity. It’s about $4,500 more expensive and decidedly less handsome. However, it promises nearly double the electric driving range and has a full-size trunk.

So, should you buy it?

And consider the vehicle that will soon replace the Fusion Energi. That’s the 2020 Ford Escape crossover with its PHEV option, which the company announced at the beginning of April. It’ll offer better interior space and about 50 km of all-electric range.

When Ford introduced the Fusion Energi in 2013, this sedan was near the leading edge of mainstream electrified cars. But now, to answer the question above, we think your money would be better spent elsewhere in the fast-growing PHEV segment.

Up Next: More Hybrid Reviews

Chris Chasehttps://chrischasescars.com/
Chris has been writing professionally about cars since 2004, in print and online. He lives in Ottawa with his wife and two feline tyrants. In rare quiet moments, he can be found travelling or playing one of his way-too-many guitars. Chris is also a journalist member of the Automobile Journalists Association of Canada (AJAC).
FILED UNDER:
FeaturedFordCar ReviewsFord ReviewsHybrid and Electric Car ReviewsSedan Reviews

The 2021 Ford F-150 interior is completely new, part of the next-generation redesign. But how different is it, really? Here's a closer look.
Read more
GMC Sierra

Studded or non-studded: the choice is yours. We put the new Continental IceContact XTRM winter tire to the test. Here's our full review.
Read more
Subaru Outback