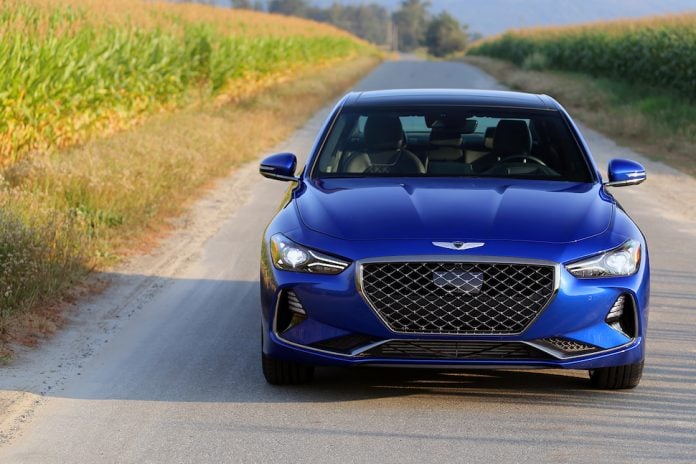 The Genesis G70 is the company’s entry model, and the third four-door to arrive following the larger G80 and G90 executive sedans. The Genesis G70 is a compact luxury sedan with decidedly sporty intentions. It’s also an award winner.

The Genesis G70 was awarded the title of 2019 North American Car of the Year (NACOTY) at the North American International Auto Show in Detroit last month. This prestigious award is well deserved as the car really is outstanding, but the award also gives the Korean automaker the claim of being the youngest-ever brand to receive the award.

While planning the G70, Genesis had set the class leading BMW 3 Series as its main target, but the Audi A4, Mercedes-Benz C-Class, and Alfa Romeo Giulia (reviewed here) were also in the sights when it came to designing this new member of their quickly expanding catalog of models.

The G70 is available in two forms (based on engine) and six models. There are four versions fitted with a 2.0-litre direct-injection turbocharged inline four-cylinder engine good for 252-hp and 260 lb.-ft of torque, and two models equipped with the more powerful 3.3-litre turbocharged 6-cylinder rated at 365-hp and 376 lb.-ft of torque.

All models save one, feature full-time all-wheel-drive and an 8-speed gearbox, although there is a 2.0-litre offering available as a rear-driver fitted with a 6-speed manual (2.0T Sport) for those buyers looking for a more involved driving experience.

Our test vehicle was the top-spec G70 3.3-litre Sport model which at $57,500, offers huge bang-for-the-buck when compared to its many rivals in this very crowded segment. One of the most intriguing aspects of Genesis as a brand is the fact that the Korean luxury car maker has elected to establish itself by introducing a trio of sedans rather than CUV and SUV offerings that have become the norm for most Canadian consumers and currently comprise the bulk of the model line-up for most of the established auto brands.

Another notable difference is the fact that Genesis offers a concierge service that begins with the company delivering a car to wherever you like – work, home, the gym – to take the initial test drive, but will also deliver your car upon purchase. Service appointments include the same treatment. That’s a disruptor.

The G70 looks like a much larger car than it is in reality, and this helps give it a presence and level of curb appeal that is missing from some of its peers. The overall look is both classy and elegant, but with enough pizzazz to convey to the world that it is something different.

At the front the car features a wide-mouthed mesh grille that almost looks like it has teeth, and the dark gray chrome of the mesh insert on our evaluation model adds a subtle level of aggression to the car.

The car’s sporty nature is further enhanced by the presence of oversized wheels (19-inch) and subtle bodylines and creases that hint at the car’s athleticism and spunk. Nothing is boy-racer or superfluous, so the G70’s looks should hold up well as time moves on.

The G70’s cabin is very sleek and modern in design, but still very luxurious and well-equipped.  The taught Nappa leather seats are firm and supportive, but their attractive quilted surfaces are still padded well enough to keep occupants comfortable on long journeys. Canadian buyers will appreciate that both front and rear seats are heated in most models. The dash is relatively uncluttered and all controls and switchgear are placed within reach of the driver’s hand and eye, and their usage becomes intuitive in short order. The centrepiece is a large touch-screen mounted high on the dash, while a mix of glove friendly soft-touch buttons and rotary dials complete the small arsenal of controls.

A smaller 7-inch display is housed between two large analog dials – speedometer and tachometer – within the instrument clustre with the purpose of conveying important status messages to the driver.

The level of fit-and-finish throughout the interior is to a standard that you would expect in much pricier automobiles, and I have no doubt that many cross-shoppers will be swayed into the Genesis camp once they recognize the value at hand.

Genesis needs to get consumers behind the wheel, and with a very limited dealer network they will have their work cut out for them

Once inside the Genesis G70 it is hard to believe that this car is classified as a compact sedan. It’s that spacious! I was even able to squeeze my XXL self into the rear seating area without much sacrifice with regards to comfort, that is as long as the front passengers didn’t have their seats pushed all the way back on the rails.

Ergonomics are great, and for the most part, all but the largest stature adults will find the cabin of this car a very pleasant place to be.

If I did have one complaint however, it would be that the car’s trunk is relatively shallow. Golf clubs and gym bags will be fine, but extra-large suitcases could pose a problem.

Driving Experience: How’s the new G70 on the Road?

I had the opportunity to take a G70 out on a dynamic handling track courtesy of local auto group Open Road a few months back, as the company had set up a tricky course at the BC Driving Centre and brought out a small fleet of G70s to showcase to interested clientele.

While the experience was brief, it did prove that the car had the moves to compete with any car in this class with regards to engineering, performance and road handling. The car tracked straight and true, exhibited very little body roll, and its engine and gearing seemed to be perfectly matched. This car shares much of its architecture and mechanicals with the very competent Kia Stinger (reviewed here), a corporate cousin, which is a good thing because that car is a noted performer, and it also helps Genesis keep the G70’s production costs in check and the final price down.

The car’s paddle shifters allowed me to explore the eight-speed transmission on the fly, and it engaged each gear quickly and with precision. Peak torque is reached at a very low 1,300 rpm in the 3.3-litre engine, and the twin turbo-chargers work their magic to deliver very smooth and linear power delivery across a wide band.

Genesis looked to Germany for both its chassis designer (pilfered from BMW’s M-Power division) and performance testing. In fact, the company developed the G70’s all-wheel-drive system on the famed Nurburgring Nordschleife racing circuit, and it shows.  The car seemingly sticks to the ground and claws its way up to speed with abandon.

It’s a user friendly rocket-ship with all the bells-and-whistles for an ultra-competitive price.

A clever driver-operated Drive Mode Select (DMS) system allows the user to fine tune the car’s control and comfort based on a number of factors including throttle response, steering weight, AWD torque, and the Genesis Adaptive Control Suspension.

The latter is an option that enthusiast drivers will want to add to the order sheet for the 3.3T Sport model as it is able to alter the damping response based on both road conditions and driver inputs. There are five modes to the DMS- Smart, Comfort, Sport, Eco and Individual

A performance car needs a performance braking system, and the Brembo system fitted to our tester was able to bring proceedings in the G70 to a halt in short order without any drama. During the track event the cars were used in an aggressive manner throughout the day, however the big Brembos remained fade free and performed flawlessly.

A full complement of seven air bags is on board, as are anti-whiplash front headrests and a Driver Attention Warning system.

As this car is looking to attract its audience from a segment of buyers that expect both comfort and convenience in their automobile the designers at Genesis have equipped all models to a very high standard.

All cars feature Genesis Connected Services as well as Apple CarPlay and Android Auto. There is an outstanding surround sound audio system by Lexicon in all models save the base 2.0-litre, and a multi-view camera system, and wireless charging pad are available on top trim cars.

Related story: What is Apple CarPlay?

After spending a week behind the wheel of a Genesis G70 it became apparent that this was a very special car. So special in fact that I would definitely put it on the short list of models I would consider for my own garage. It’s a user friendly rocket-ship with all the bells-and-whistles for an ultra-competitive price.

However, in order to lure loyal customers away from brands such as BMW and its Germanic brethren, Genesis needs to get consumers behind the wheel, and with a very limited dealer network they will have their work cut out for them.

Russell Purcellhttps://www.flickr.com/people/autoexposurecanada/
Russell Purcell is an award-winning automotive journalist and photographer based in Vancouver, B.C. His passion for automobiles was sparked at the tender age of six, when a family friend gave the wide-eyed first grader a ride to school in a track prepared Porsche 911 RSR. He continues to fan the flames by building an impressive library of automotive related books as well as a vast collection of interesting automobilia and motoring artefacts. Russell is a member of the Automobile Journalists Association of Canada, and is active on Twitter as RoadTestRuss.
FILED UNDER:
FeaturedGenesisCar ReviewsSedan Reviews
Previous article2020 Supra 4×4 Concept Toyota Needs to Build Right Now
Next articleNew 2019 A-Class Sedan Joins Hatchback This Spring