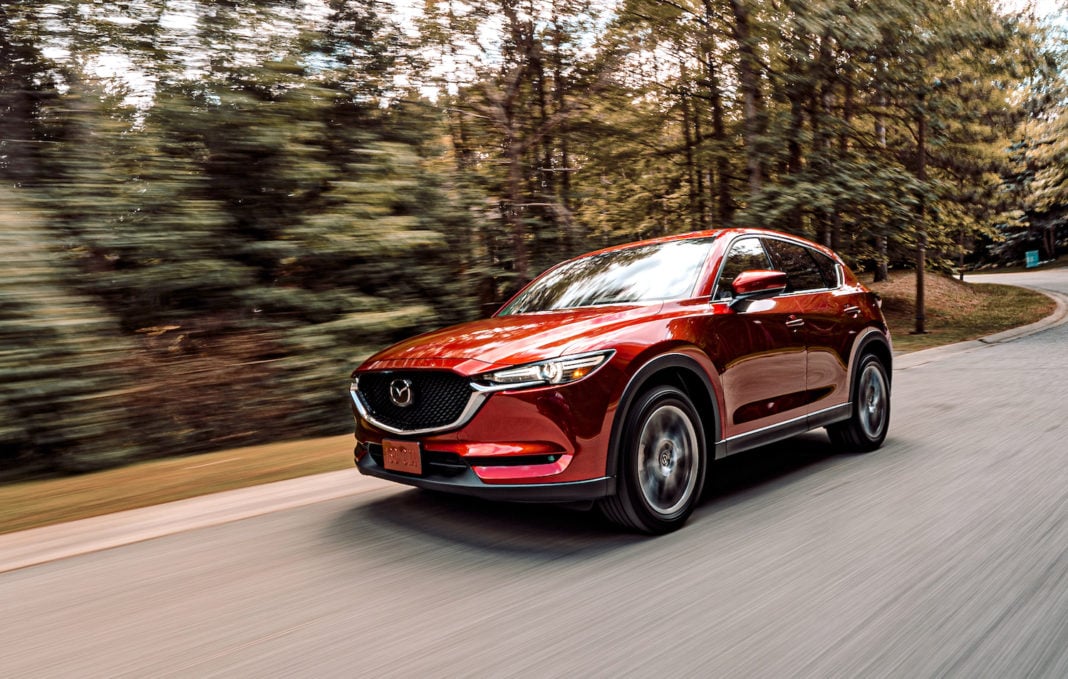 No direct competitors to benchmark

Mazda’s North American diesel debut has been years in the making. As long ago as 2013, the company was running diesel-powered Mazda 6 sedans in IMSA road races to raise awareness for a forthcoming street version.

That machine never materialized – due initially to difficulties in getting the engine to meet US emissions standards without a complex and costly exhaust aftertreatment system. The Volkswagen emissions scandal of 2015 showed that goal had likely never been possible, but delayed Mazda’s North American diesel program even further.

In the meantime, the 2.2-litre, Skyactiv-D diesel motor continued to do good business for Mazda in other markets like Japan and Europe. In 2018 the engine was updated with a selective catalytic reduction (SCR)/AdBlue aftertreatment system to reduce NOx emissions, paving the way for its North American introduction as a 2019 model.

We did a full review of the current-generation CX-5 in 2017 (see our review here). For the 2019 CX-5 Skyactiv-D that we recently tested, we’ll focus on recent upgrades and the impact of that long-awaited diesel powerplant.

For something bigger, here are out CX-9 Reviews.

As I write this, the 2019 CX-5 Signature is the only model available for sale with the Skyactiv-D engine. The 2020 version is currently undergoing a re-certification process, as is required by CARB (California Air Resources Board) every two years. This has apparently delayed the start of sales for the 2020 model year.

Mazda says that once it receives the final certification for sale, it will announce production and sales start timing for the 2020 CX-5 diesel. For now, the 2019 edition provides a useful comparison. It sells for a substantial C$5,000 (US$4,110 in the US) above the gasoline car’s sticker price; our test car’s MSRP was C$45,950.

Since we last drove the CX-5, Mazda has added a Signature trim level that brings a new level of luxury to the car. We very much liked the cocoa brown Nappa leather seats in our Signature test vehicle, which were soft and comfortable. Together with dashes of wood and chrome trim, they go some distance to breaking up an otherwise black interior.

For 2020, the Signature also gets a 360°, top-view camera and front and rear parking sensors to aid low-speed maneuvering. On our 2019 model, the rear back-up camera quickly became caked in snow during our mid-winter test, highlighting once again the challenges for engineers developing the sensors that will keep future autonomous vehicles safe.

The 2.5-litre turbo gasoline engine (not driven here) that also appears in the 6 and the CX-9 was a key mechanical addition to the CX-5 lineup for 2019. Like the diesel, it comes only with a 6-speed automatic gearbox and AWD.

Other changes included an update to the G-Vectoring Control (GVC) vehicle dynamics control system, now known as GVC Plus. The key addition here is braking control, which applies a hint of braking to the outer tires when returning the steering wheel to neutral to improve stability when changing lanes, in emergency maneuvers or on slippery surfaces.

For 2020, further improvements are limited to better cabin quietness, thanks to upgraded materials between the headliner and vehicle body. There are also some changes to equipment levels and interior/exterior colour availability.

The Skyactiv-D delivers 168 HP and 290 lb-ft of torque, which might not sound like much but is more than enough to give smooth, spritely overtaking performance in a vehicle of this size. The motor also brings 1,588kg (3,500 lb) of towing capacity, a substantial increase on the 2,000 lb offered by gas-powered CX-5s.

You’ll notice a bit of diesel clatter when it’s cold, but once warm or in the cruise, it’s extremely quiet. In fact, I’d argue that the engine note is preferable to some of the four-cylinder gas engines around, and certainly more appealing than the buzzy, normally aspirated 2.5 in lower-spec CX-5s.

Fuel economy is billed as another diesel strength, but the Skyactiv-D doesn’t set the world alight in this area – on paper at least. The official combined consumption figure is an underwhelming 8.4L/100km (28mpg). That makes it the most fuel-efficient CX-5, but compares poorly with the equivalent engine’s European tune, which returns 7.1L/100km (33mpg).

Perhaps there’s also something in the testing method on this side of the Pond that’s making the Mazda look worse than it is. We’ve a feeling that in everyday use, the Skyactiv-D should achieve lower consumption than the official figure. That was hard to prove during our test as the weather was hovering around -25°C for much of the time, but we felt an average of 9.7L/100km in mixed driving, in those temperatures, was a pretty good performance. A second trip meter, used by a previous tester, showed an average of 8.2L/100km over several hundred miles, so lower numbers are clearly possible.

We’ll be interested to see the figures when Mazda publishes them for 2020-certified Skyactiv-D. Perhaps an official improvement is on the cards.

The CX-5 was always one of the better compact SUVs to drive and the diesel’s flexibility only enhances that impression. The instant torque is a boon in town driving, making for more relaxed progress than most turbo gasoline engines offer, despite what on-paper torque figures might suggest.

…diesels can be great to drive and offer benefits for towing, too. Modern aftertreatments make them as clean as any gasoline equivalent.

With improved contenders like the Toyota RAV4 and Ford Escape having come to market since we last drove the CX-5, it now has more competition when it comes to ride and handling, but still holds its own thanks to its well-weighted, accurate steering and good body control. Ride comfort remains on the firm side for this segment, but it’s never hard, possibly aided by the impressive Yokohama iceGuard G075 winter tires fitted to the test vehicle’s 19in alloys.

It’s unfortunate that the fallout from the VW diesel scandal appears to have thrown all passenger-car diesel babies out with the bathwater. With the demise of the short-lived Chevrolet Equinox and GMC Terrain diesels there are now no direct diesel competitors to the CX-5 in North America. Instead, automakers like Ford and Toyota are looking to gasoline hybrids to check the economy box.

We think that’s a huge shame because diesels can be great to drive and offer benefits for towing, too. Modern aftertreatments make them as clean as any gasoline equivalent.

If it’s a while since you drove a diesel in a passenger car, we recommend you try the CX-5 Signature with the Skyactiv-D motor. Unfortunately, with economies of scale unlikely to be realized in a diesel-skeptical market, it’ll almost certainly remain a rare, costly alternative to its gas-powered siblings. 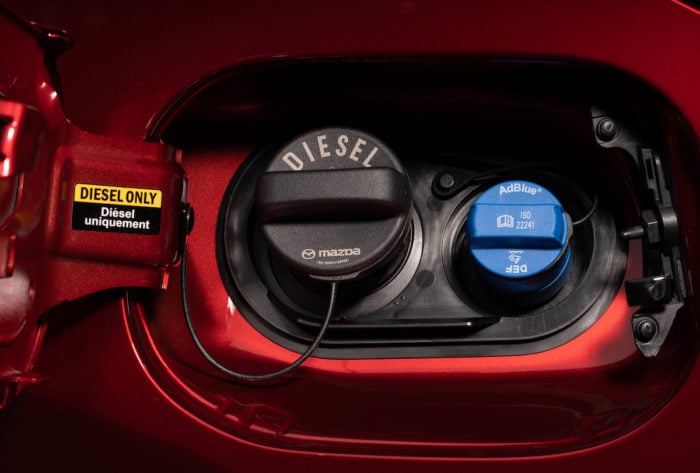 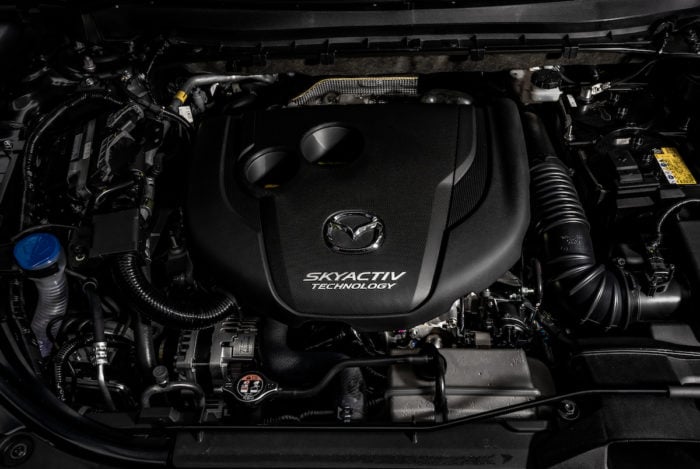 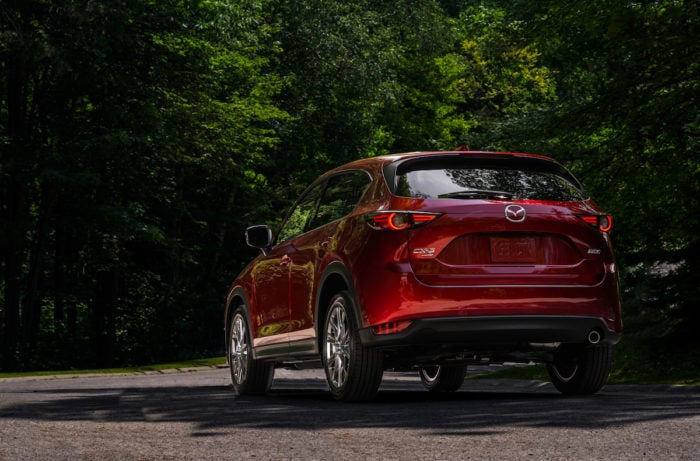 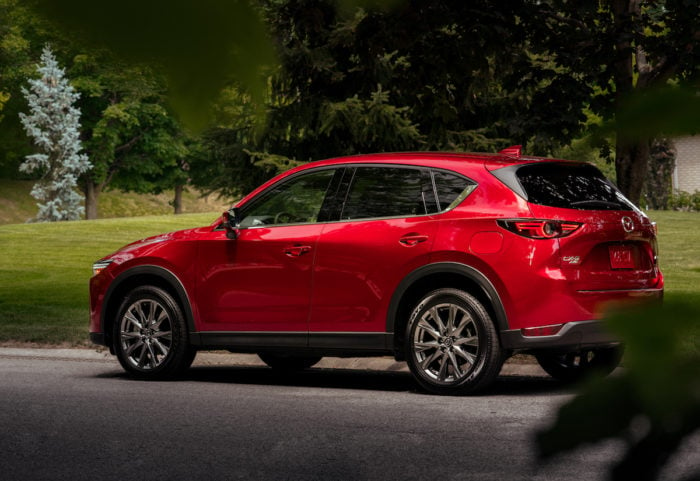