It’s easy to like this latest Toyota RAV4’s style and comfort, but at our Limited test car’s hefty price, we expected a higher level of refinement. 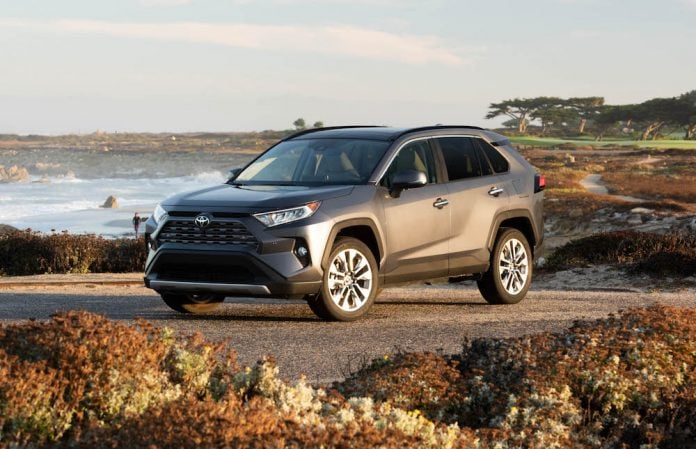 Toyota introduced its first RAV4 in the second half of the 1990s, kicking off a crossover craze that has only gotten hotter since. Like the Honda CR-V and the Ford Escape that followed a few years later, the RAV4 attracted buyers in droves with its combination of car comfort and SUV utility.

In the 20-plus years since, car manufacturers have invested a lot of time and money refining the small-SUV formula. Now, these vehicles are as comfortable and efficient as the mid-size cars they have largely replaced as favoured family transportation.

For 2019, Toyota has nudged the RAV4 toward the utility end of the spectrum with a design that looks and feels more rugged than any previous generation of this popular nameplate.

That transition began in 2018, the final year of the previous generation RAV4, when Toyota Canada added a Trail trim level (called Adventure in the U.S.) with a bit of extra ground clearance and more than double the towing capacity of other RAV4 models.

Toyota has carried that Trail package over into the new generation RAV4. And while the Limited model we tested doesn’t boast those tougher traits, even this top-of-the-line trim’s drive feels inspired by the RAV4 Trail’s extra capabilities.

Driver and front passenger look out over a broad hood that, combined with a spacious interior, makes the RAV4 feel larger than it is from behind the wheel. That put us in mind of the 4Runner, Toyota’s mid-size, off-road-ready SUV.

Those riding in the rear get all kinds of headroom, and everyone inside the Limited trim is treated to upscale touches like a stitched dash and door panels. The knobs for the climate and audio controls are easy to grip, but the volume control is a long reach for the front passenger.

In the RAV4 Limited, an 8.0-inch touchscreen is central to the user experience (lesser trims get a 7.0-inch display). Its interface is well-designed, housing Toyota’s proprietary Entune 3.0 infotainment system, which supports Apple CarPlay but not Android Auto.

LED headlights and taillights are standard across the board. Passive keyless-entry system is standard in XLE trim and up, and is notable for putting touch sensors on all four doors and the tailgate, so you can lock and unlock the car from any of them.

Gasoline-powered RAV4 models use a 2.5L four-cylinder engine with 203 hp and 184 lb-ft of torque. It’s part of Toyota’s family of new Dynamic Force engines, which promise stronger performance and better fuel economy. Indeed, it’s a strong performer and moves the RAV4 capably, working with an also-new eight-speed transmission that’s a good match for it.

It’s a noisy engine, though, sounding a bit like a diesel in acceleration. The transmission’s performance is mostly good, but in rolling starts, where we began accelerating after slowing but not quite stopping, it routinely pulled off a jerky shift from second gear into first.

The RAV4’s new engine posted a fuel consumption average of just under 9.0L/100 km in a mix of city and highway driving. Toyota’s estimates for an AWD model are 9.2/7.1 (city/highway).

A Honda CR-V Touring is priced at $39,090 but leaves out two of our favourite features: ventilated front seats and a hands-free tailgate (although the rear door is power-operated).

The Hyundai Tucson is a closer match, features-wise, and comes in at $37,999.

Subaru dresses its Forester in a Premier trim that goes for $39,495 but also lacks ventilated seating and a hands-free tailgate.

The Chevrolet Equinox Premier starts at an attractive $34,900 and includes a convenient hands-free tailgate, but other niceties, including ventilated front seats, are optional.

The Ford Escape is harder to compare, as its poshest Titanium trim comes standard with a more potent 2.0L turbo engine that’s less efficient in real-world driving than the RAV4’s motor. At a price well over $40,000, it also appears to lack ventilated front seats.

Takeaway: is the new RAV4 worth it?

We like the new RAV4’s more substantial appearance, but that look hints at a driving character that’s less refined than the outgoing model. We suspect some long-time RAV4 owners will be surprised by how large this supposedly compact model feels from the driver’s seat, though its measurements have grown only marginally.

Then there’s the grumbly engine, which sounds like it belongs in a proper off-roader, not a vehicle designed as a comfortable family hauler.

It’s easy to like this latest Toyota RAV4’s style and comfort, but at our Limited test car’s $40,000-plus price, we expected a higher level of refinement.

Chris Chasehttps://chrischasescars.com/
Chris has been writing professionally about cars since 2004, in print and online. He lives in Ottawa with his wife and two feline tyrants. In rare quiet moments, he can be found travelling or playing one of his way-too-many guitars. Chris is also a journalist member of the Automobile Journalists Association of Canada (AJAC).
FILED UNDER:
SUV and Crossover Reviews2019 SUV ReviewsFeaturedToyotaToyota RAV4Car ReviewsToyota Reviews