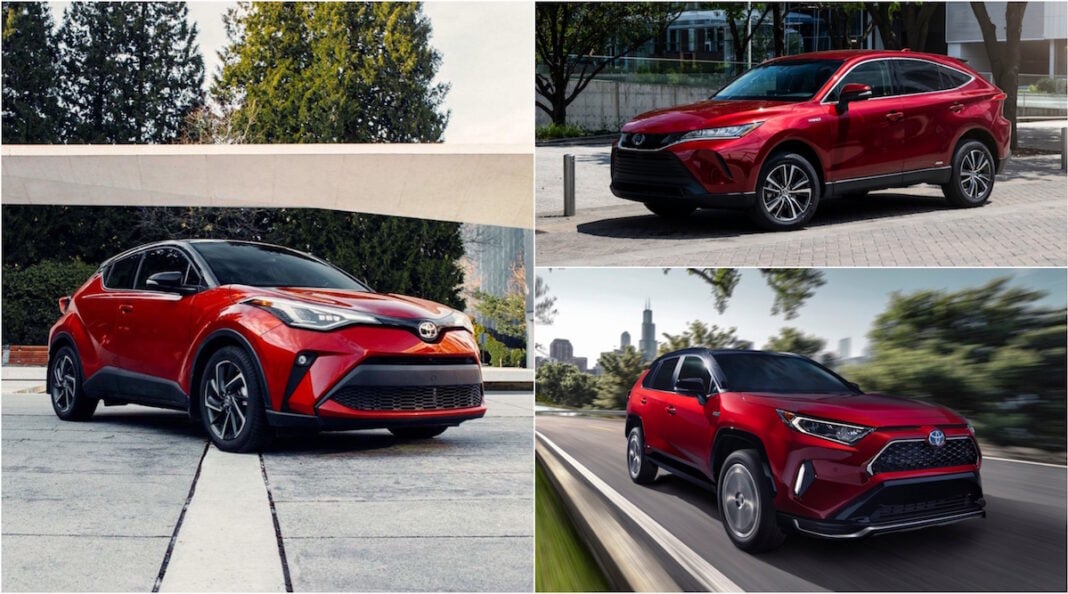 When you first think of Toyota, the Corolla or Camry might come to mind. Both are stalwarts in their segments. You may also think about the Prius and Toyota’s wide array of hybrid offerings owners evidently like to keep around awhile.

You may not, however, think about their crossovers and SUVS. At least not at first. Toyota has built a wide range of strong nameplates in this space.

Here we take a closer look at Toyota’s crossovers and small SUVs, exploring what you can expect from each; followed by three bigger Toyota SUVs if you’d like to upsize.

Why we like it: Supremely comfortable, sleek new infotainment design

Who’s it for: Busy families who are constantly on the go

The Toyota RAV4 arguably has the most comfortable seats in its class. It might be an unconventional feature to lead with, but it’s the first thing I noticed when I got inside the RAV4. They’re wide. Plush, yet firm. And they do a great job of folding you into the driver’s seat. It actually makes you feel part of the vehicle.

The RAV4 is an SUV that majors on comfort and practicality, a big reason why it’s the best-selling vehicle in its class. The new design is a step in the right direction—the lines are sharper and definitely more appealing than previous models—but this isn’t what makes it a popular choice.

It’s popular because it’s an SUV that doesn’t require overthinking. It drives better than you’d expect (its 2.5L engine capable of 203HP is surprisingly spry); it has room for all your family’s daily needs; and it comes with Toyota’s reputation for reliability.

It’s a stretch to say the RAV4 is a sleeper pick because it sells so well, but it certainly is a SUV that deserves to steal more headlines.

Why we like it: A hybrid that doesn’t sacrifice style or amenities

Who it’s for: Families who appreciate looking good, while saving at the pump

The Venza is back—and this time, it’s a looker.

While quite popular, the last design of the Toyota Venza—which has been absent from the market for five years—didn’t age particularly well. If you see one on the road, take a closer look and you’ll know what I mean.

The 2021 Toyota Venza, however, is styled with the future in mind. Its low profile front grille, sharp lines, and sleek roofline creates an upscale look that should hold up over the next two decades—at least.

Oh, and in case you didn’t hear, the current 2021 Toyota Venza only comes as a hybrid. This move makes sense for Toyota, who believes that hybrid vehicles will make up nearly half of their sales by 2025.

Under the hood you’ll find Toyota’s 2.5L, four-cylinder engine that has a combined 219HP. For a two-row, five-seat crossover, this amount of power is more than enough for the every day—and its firm suspension adds a little sportiness to its ride.

Up front, Toyota did a commendable job blending technology into a clean design. The square infotainment screen, perched on the top of the dash, feels like the work of a modern interior designer. Nearly every safety tech feature is available, making the Toyota Venza feel like a Lexus-lite model.

Why we like it: Great standard features, bright and colourful

Who’s it for: City dweller who wants a little extra room in a stylish package

The CH-R is the youthful pick out of Toyota’s crossover and small SUV lineup – it’s also the brand’s smallest utility offering.

This little guy packs 144 horses in its 2.0L, four-cylinder engine. Certainly not world beating, but as a city-focused vehicle, it gets the job done adequately.

It comes with Apple Carplay and Android Auto capabilities, and Toyota Safety Sense—the automaker’s suite of safety technology, including Blind Spot Monitor with Rear Cross Traffic Alert—comes standard. That may not be a headline for the Venza, but this is a big deal for a compact crossover like the CH-R.

Playing to its audience, Toyota offers the CH-R in a number of eye-catching, two-tone colours. The Nightshade edition, complete with black roof and handles, is definitely the standout.

Toyota does have larger SUVs available if your family is growing or you just want a little extra space.

The Highlander, a staple in Toyota’s lineup, is a versatile SUV that offers 7- and 8-seat options.

Low to the ground, with expressive styling, the Highlander drives smaller than it looks. Its 3.5L V6 pushes 295 HP, and can tow up to 5,000 lbs.

In the back, the third row folds flat for even more storage options.

Built for life in the outdoors, the 4Runner is a rugged mid-size SUV that can handle nearly anything you throw at it.

Built for off-roading, especially if you opt for the TRD Pro, the 4Runner is perfect for your next camping expedition. However, it drives smooth and steady for your everyday commute or jaunt to pick-up the kids.

The Sequoia will take your next family road trip to a new level.

It has seating for eight, and boasts and incredibly airy and large cabin. It feels as if there’s an endless amount of space for cargo when you’re sitting in the back.

Of course, a vehicle this size needs a lot of power. Toyota doesn’t disappoint, by using its 5.7L V8 engine, capable of 381 HP.

If you need size, and want to go all out, then the Land Cruiser should top your list.

The Land Cruiser combines off-road capability with refined styling, technology, and power. In short: expect all the amenities of a luxury SUV, housed in a serene cabin, with Toyota’s 5.7L V8 engine moving you forward.

Travis Persaud
Travis Persaud has contributed to a number of magazines across North America, including enRoute and Exclaim! He loves variety and it shows in the wide range of topics he’s covered: automotive to music, technology to travel, beer to real estate. He’s currently the editor of WHERE Ottawa (city travel guide), beer columnist for Ottawa Magazine, a frequent contributor to CAA Magazine and the former associate editor of Zoomer Magazine.
FILED UNDER:
New SUV & CrossoversCompact SUV & CrossoversFeaturedSubcompact SUV Crossovers