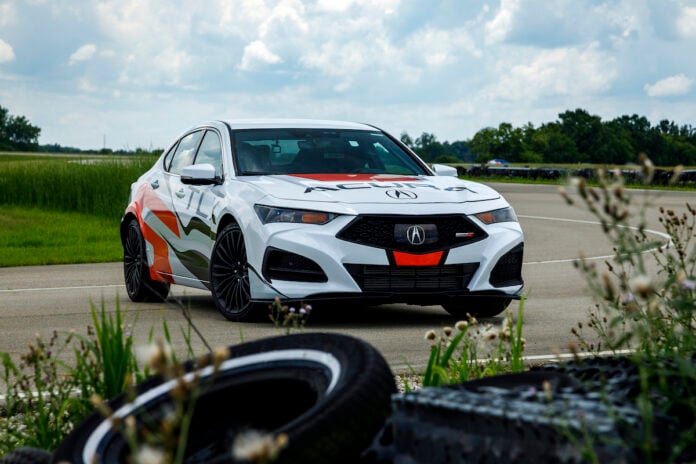 Acura recently revealed the new 2021 TLX lineup with full specs, but gave us little info about the performance-tuned TLX Type S specs, including horsepower figures. We knew the redesigned Type S would be powered by a brand-new 3.0L turbo V6 engine, and the turbo V6’s full specs and power figures closer to when the TLX Type-S launches early 2021.

Well, now we have a better idea if these prototypes are any indication. The company is sending three vehicles to compete in the 98th running of the “Race to the Clouds” on August 30, 2020 at Pikes Peak Hill — these include two race-tuned 2021 TLX sport sedans (regular TLX and Type S) and a “Time Attack” NSX.

So, how how much horsepower will 2021 TLX Type S produce?

Expect the 2021 TLX Type S to produce around 355-hp and 354 lb.ft. of torque, according to Acura; all sitting on a new forth-generation AWD system (dubbed Super Handling All-Wheel Drive).

Keep in mind, this 2021 TLX Type S is a prototype undergoing final development tuning before officially hitting dealerships in Spring 2021. So these figures may change. But give or take a few horses, 355-hp well exceeds the 2021 TLX’s 2.0L turbo which makes 272-hp and 280 lb.ft. of torque.

Both engines will come matched with a 10-speed automatic transmission. This high-tech system can send as much as 70 per cent of the engine’s power to the rear axle, which can then send all power to either the left or right rear wheel depending on road and driving conditions to further aid handling performance.

The car you see here is the TLX Type S Pace Car, piloted by Nick Robinson, Acura’s principle engineer responsible for the chassis development. It does get some extra you won’t be able to upgrade, including  the optional lightweight Y-Spoke wheels and several safety modifications including a roll-cage and fire suppression system.

End of the day, this Type S prototype shows us what the new 3.0L turbo is cable of. And the result is Acura’s quickest, best-handling and most well-appointed sport sedan in the company’s history since the TLX first arrived in 2015 when it replaced the TL.

Now, if Acura can just get shoppers to buy sedans instead of SUVs, we’d be in business.

The Automobile Journalists Association of Canada (AJAC) has revealed the three finalists in each of 12 vehicle categories that will ultimately determine the 2019 Canadian Car of the Year and Utility Vehicle of the Year.
Read more
Acura