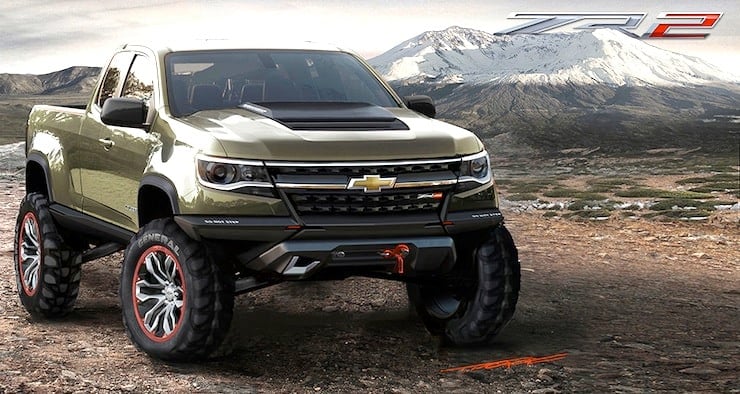 Chevrolet today introduced the Colorado ZR2 concept – a vision of how Chevrolet could take the all-new midsize truck’s off-road capability to the next level. It also showcases the new 2.8L Duramax diesel engine that will arrive in the Colorado lineup later next year. The aggressively styled concept builds on the capabilities of the production Colorado Z71 and advances the legacy of Chevrolet’s previous ZR2 production models.

The Colorado ZR2’s imposing stance is four inches wider than a production Colorado Z71, with features including new front and rear fascias designed to increase approach and departure angles when driving off road. Ground clearance and rough terrain are handled with a two-inch lift and integral skid plates, while the wider track helps enhance stability in potentially unstable situations.

Exterior elements include an all-new grille and headlamp housings with blacked-out accents. The power dome-style hood is unique and echoes the design cues of Chevrolet’s Duramax-powered Silverado heavy-duty trucks.

Inside the ZR2, the concept off-roader features the same blend of capability and comfort found in the production Colorado Z71, with ZR2 logos embroidered on the front-seat headrests and embossed in the custom Chevrolet Accessories-based floor liners. The ZR2 logo is featured on the instrument cluster display, as well as a custom inclinometer that shows degree of incline from front to back, and side to side. The Jet Black leather-trimmed interior features orange stitching that complements the exterior’s orange accents.

Chevy’s new 2021 Trailblazer will bolster its offering in the small-SUV segment when it arrives late spring. But does the interior stack up to the hype?
Read more
Chevrolet Corvette

With the hunting and fishing crowd in mind, Chevy teams up with camo brand Realtree on this special edition Silverado Trail Boss - their second collabo.
Read more
Chevrolet Corvette

Following in the footsteps of Colorado ZR2 sibling, Chevy's new 420-hp Silverado race truck joins the action at the Best in the Desert Racing series based in Nevada.
Read more
Chevrolet Silverado

We head to Daytona and get up close with the 2019 Corvette Drivers Series special edition Grand Sport models; a collaboration with the Corvette Racing team.
Read more
Chevrolet