Forget the big trucks, mid-size is where it's at - here are all the latest compact models to know about 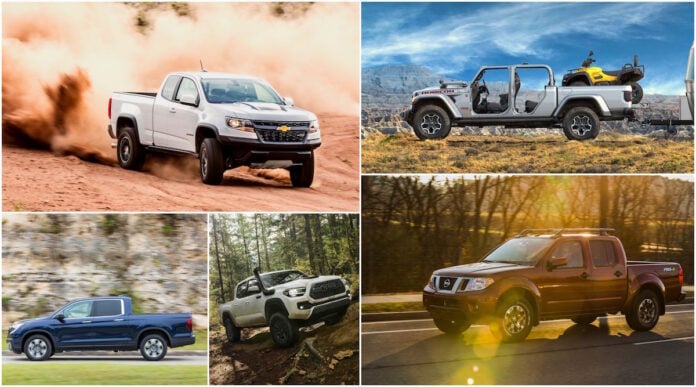 Full-size pickup trucks have been some of the best-selling vehicles in North America for years now, dominating with huge sales that reflect how a vehicle type once reserved for utilitarian purposes has crossed over into the mainstream.

However, the 2015 model year saw the beginning of a shift toward the mid-size pickup segment. That was when Chevrolet and GMC redesigned their mid-size models into more spacious trucks that added refinement and capability. A year later, Toyota redid its Tacoma model with a similar goal in mind; 2019 saw Ford revive the Ranger name for its latest mid-size truck; and in 2020 Jeep returned to the pickup segment after a long hiatus with the Gladiator.

Time will tell which of the domestic automakers will find the most success in the mid-size truck segment. Read on to find out what’s waiting for shoppers in this burgeoning corner of the new-vehicle marketplace. Trucks highlighted here include:

Early in 2020, Nissan announced a long-awaited redesign for its Frontier pickup, which will debut as a 2021 model. This new truck promises to bring Nissan into the modern age of mid-size trucks after years of attempting to compete with a design dating from the mid-2000s.

If you buy a 2020 model Frontier, you’ll have to make do with the old look, but you will get a taste of the new truck thanks to an all-new 3.8L, 310-hp V6 and nine-speed transmission that will be carried over to the 2021 Frontier.

Nissan had originally set the 2021 Frontier’s arrival for September of 2020, but that timeline was taken before the coronavirus pandemic brought the world to a halt. Nissan has yet to confirm whether the new Frontier will be delayed. So far, Nissan has only teased the new look, highlighting LED daytime running lights, but not showing much else.

There you have it, all the latest mid-size trucks available right now. They may be smaller than their full-size counterparts, but with beefier styling, impressive performance and towing capacities, and the latest tech these once diminutive, better-than-a-small-car pickups have definitely gained ground in recent years.

Shopping for a new truck? Hit up our truck reviews page here.

Chris Chasehttps://chrischasescars.com/
Chris has been writing professionally about cars since 2004, in print and online. He lives in Ottawa with his wife and two feline tyrants. In rare quiet moments, he can be found travelling or playing one of his way-too-many guitars. Chris is also a journalist member of the Automobile Journalists Association of Canada (AJAC).
FILED UNDER:
FeaturedNew CarsCar ReviewsTruck Reviews

With all of the new nameplates it’s easy to overlook the 2020 mid-size SUVs that have been selling for years. These 5 are some of the best.
Read more
Tire Reviews