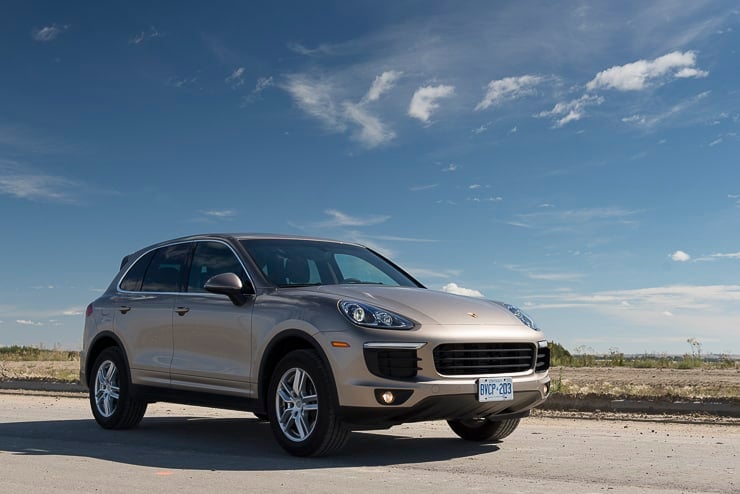 It’s not the turbocharged V8 monster, but the 2015 Porsche Cayenne V6 with a mere 300-hp will suite most just fine.

V6 Power Does the Trick

For those who really dig SUVs with unworldly amounts of horsepower, Porsche will gladly sell you the Cayenne Turbo S, with a turbocharged V-8 so powerful it can rip a hole in space-time.

For us mortal souls, however, the German automaker offers the 2015 Porsche Cayenne V-6. Almost a third the price of the Turbo S, the Cayenne V-6 does such a credible job the only time you’ll miss the turbo V-8 is when you’re next to one at a stoplight. The V-6 won’t affect the Earth’s rotational speed, but it will give you a nice bit of seatback compression on acceleration, all for a relatively reasonable fuel consumption, observed, of about 13.2 to 14 litres per 100 km combined.

Indeed, while I would heartily recommend those with the means go all the way, there really is no need if you want reasonable performance and Porsche-like handling and have hopes of a sustainable retirement fund.

Because while the V-6 won’t reach the heady 570 horsepower of the Turbo S, it certainly will fill the needs of the daily driver looking for some added panache and performance. Its 300 horsepower and 295 pound-feet of torque are hardly lacking for punch.

All of that made the lowliest of Cayennes a thrilling ride. It competes favourably with rivals such as the Mercedes ML and BMW X5. During my week with the Cayenne, a colleague took a picture and asked if it really was worth the added price over a comparably sized mainstream model, such as a Honda Pilot or GMC Acadia.

It was an interesting question and it did inspire a bit of soul-searching. Sure, anything will get you from point A to point B. The difference is whether that which Porsche spends extra money achieving is worth it to you. The Pilot and its ilk are certainly capable SUVs with excellent on-road handling. The Cayenne is a bit better.

Those mainstream SUVs have decent interiors with good build quality. The Cayenne is arguably a bit better.  Some of the details are more intricate and some of the materials are a bit higher quality.  You’re also paying for some pretty extensive sports-car engineering know-how, and you can indeed feel that pay off when you’re in the twisties.

Finally, lots of people are going to buy Pilots and Acadias and Explorers. Fewer will buy Cayennes. That exclusivity is also part of the added price and attraction.

So to my colleague’s question, the only answer, really, is up to you. I was never fond of early Porsche interiors. They always seemed almost afterthoughty, as in “Hey, we built a fantastic sports car with great power and great handling. What? Oh… the interior… uh, yeah… well, I guess we better do something.”

Today’s Porsche interiors are stunning, from the Macan and Boxster all the way up to the 911 Turbo S. First off, the function is very well thought out, with a centre console that puts all the most-used controls right at hand. Then, it’s draped in high-quality materials, from soft-touch vinyl, chrome and piano black plastic to hardly ostentatious presentations of wood trim. Click extra boxes on the online ordering tool and you can get some outstanding options such as carbon-fibre or embossed aluminum.

Like hybrids, and appearing on many other luxury brands, the Cayenne will shut off the engine at a light or while you are paused in traffic. It is one of the ways the Cayenne gets good fuel economy, but it’s also quite noticeable, particularly rolling toward a stoplight.

As with many things Porsche, options add up quickly. It’s not entirely unusual to get Porsche press cars with a price of the base MSRP plus half again in options.  Fortunately, a naked Porsche is still quite attractive.

If there are a few niggly bits, one certainly revolves around the auto-stop feature. Like hybrids, and appearing on many other luxury brands, the Cayenne will shut off the engine at a light or while you are paused in traffic. It is one of the ways the Cayenne gets good fuel economy, but it’s also quite noticeable, particularly rolling toward a stoplight. It will kill the engine, and thus the power steering, before you’ve actually stopped. It’s quite unnerving.

That, however, brings up one other thing I do like about the Cayenne: hydraulic power steering. While many manufacturers are going to electric power assist to save fuel, the Cayenne stays old-school, which really helps it deliver excellent steering feel and feedback. This is no video-game. That said, Porsche does make cars with electric power steering and excellent feel, such as the new 911 Turbo S.

The Cayenne starts off the model range with a base sticker of $67,400

So virtually no Cayenne is for the faint of wallet. On the other hand, about that Acadia… With not a lot of work, it’s not hard to get one of those into the $60,000s, too.

Anything Porsche will get you noticed. Whether it’s the Macan, Cayenne, an old 944 or any model year of 911, the brand’s name carries a mystique few other carmakers can claim. That they’re also a blast to drive is just gravy. How I would order it: Just like that. Really. If money were no object, I wouldn’t be getting the V-6, and it has enough standard features (heated seats, heated steering wheel, bi-xenon headlights, etc.) that I’d be happy with it right out of the box. I would probably pay the $910 extra for metallic paint, and I’d take advantage of Porsche’s free European delivery, which includes a factory tour in Leipzig (but does not include the travel costs). You get to take possession in Germany, drive it there for a while and then return it to Porsche for shipping home.

Kelly Taylor
Kelly Taylor has been writing about cars since 2000. His favourite ride has been the Audi R8 from Thunder Bay to Winnipeg, where he nearly traded the car for a Ford Ranger, a Greyhound Bus and the Blue Heron Gift Store in Kenora, Ont.
FILED UNDER:
SUV and Crossover Reviews2015 SUV and Crossover ReviewsNew CarsCar ReviewsPorschePorsche CayennePorsche ReviewsPorsche Cayenne Reviews