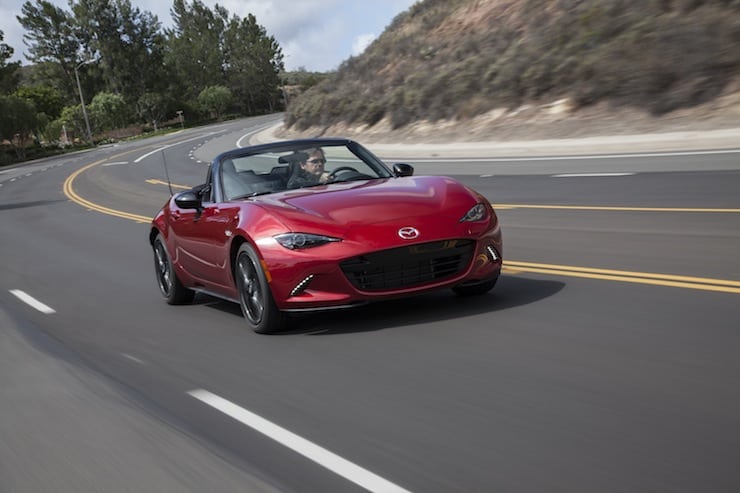 Our 2nd review of the 2016 Mazda Miata (or MX-5 Miata) now in its fourth-generation scales down in size but adds a bigger dose of style.

HOLLYWOOD, Calif. — The mist that greets almost every day in Los Angeles is starting to burn away as we pull onto California 101, hinting at a Southern California scorcher to come.

Sure enough, within an hour, my driving partner, Antoine Joubert from L’Annuel de l’automobile, and I are digging out the sunscreen and slathering on another layer. By mid-afternoon, the car’s thermometer says it’s 97 degrees F (36 C) and we’re into our fifth layer of sunscreen.

It’s all very necessary, since we’re here to drive the new 2016 Mazda MX-5, the latest generation of a revolution of roadsters dating back to 1989 and the Chicago Auto Show.

Before we’d arrived back at the hotel, we capitulated. In the name of journalism, of course. I mean, we just had to test Mazda’s assertion the new soft top is 40 per cent quieter than the previous generation, right?

And it was, but it was far from the most remarkable part of this brilliant new model.

ALSO SEE: All our Mazda Reviews In a fit of metallurgical madness, or magic, Mazda managed to return the MX-5 back to within a single kilogram of the weight of that original 1990 Miata. Aluminum where it can save weight, high-strength steel where it counts and new shapes of various pieces to improve strength without adding weight all add up to shedding kilograms.

Mazda has become obsessed with saving weight, going so far as to even name the process — the Gram approach — where engineers exploit every opportunity to keep weight out of a vehicle. They go so far as to hollow out bolt heads.

The automatic transmission was OK, but on a car this much fun to drive with a stick, why?

In the MX-5, Mazda saved 22 kilograms in the body structure, nine kg in the engine, 7.5 kg in the transmission, 7.5 kg in the differential, 13 kg in the suspension and almost a kilogram in the powerplant frame.

For a car with sporting aspirations, these are huge numbers. In performance-oriented driving, weight is the enemy: it robs power and reduces braking effectiveness; it increases body roll and inertia, making it harder to maintain grip in high-speed turns and it requires stronger, heavier suspension pieces to support it all.

Combine that with a body structure that is stiffer and lighter than the last generation, including a driveshaft tunnel that is a structural link between rear differential and the transmission, retuned suspension for even better handling and a motor that proves less is more (see sidebar), and it might be the performance-driving bargain in the history of roadsters.

Mazda engineer Dave Coleman said the modest power lets drivers use all of it, and because it also means a lighter engine and better handling, you can even use it through corners, arguably to carry more speed through corners than a muscle car.

“Fundamentally, it’s more fun to drive a slow car fast than it is to drive a fast car slow,” he said.

“It also changes how you can set up a car. With modest power, we can set up the car to be really neutral knowing that if you get on the throttle really hard, it’s not going to light up the tires and send you into the weeds.

“With a 300-horsepower car, you have to tune it to naturally understeer so that when you’re on the throttle, it brings the car back into neutral.”

The MX-5’s 2.0-litre engine is rated for 155 horsepower and 148 pound-feet of torque. That’s down 12 horsepower from the outgoing model, but up in torque from last year’s 140 pound-feet. Fuel economy is rated at 8.8 litres per 100 km city and 6.9 highway (the automatic is 8.9 city and 6.5 highway). Which means the new car’s city fuel mileage is almost as good as the previous model’s highway mileage. The sense of everyone here is the handling and grip is so impressive, you almost couldn’t lose control if you wanted to. We pushed the car hard around some wickedly tight switchbacks on the amazing roads north of Hollywood. Yet at no point did it feel we were even approaching the car’s limits.

It may seem this is all despite a compliant suspension that makes for a very comfortable ride even with a short wheelbase car such as this, the truth is the handling is BECAUSE of the compliant suspension. Lightly sprung, well-damped is the key to good handling. Light springs help the wheel ride bumps while good damping (the action of shock absorbers) pushes the wheel back down when the bump is done.

The manual transmission is superb. Miata/MX-5 has always been known for super-short shifter throws, but now those short throws come with much less shifting effort and an almost seeing-eye ability to hit the correct gears. The pedal positions and the programming for the throttle make heel-and-toe downshifts almost intuitive. It seemed all you had to do was put your foot in the right position and you got just the right amount of throttle blip on a downshift.

The automatic transmission was OK, but on a car this much fun to drive with a stick, why?

The cloth seats in the GS we first drove were excellent. Instead of springs and padding, the new seats use a webbing to support your back. It not only saves weight, it also provides excellent support, with journalists large and small remarking how it seemed the seat was made just for them.

This is for a few reasons: first, the front suspension uses what is called a high caster angle. This means the vertical axis of the front wheels is tilted backward to a higher degree than usual, about eight degrees in the MX-5. This increases the self-centering force on the steering wheel, which increases feedback.

Of course, this is a convertible, and how well the convertible top works is a big factor in how likely you are to drop it. It drops easily and raises even easier. A stronger spring and a lighter structure for the cloth help it come back up quickly. By hiding an aluminum plate under the cloth at the leading edge, Mazda has made the top 40 per cent quieter. Coleman said this is because air breaks as it travels over the top of the windscreen, creating a low pressure system that pulls against the roof. With just a cloth covering, this causes the cloth to flutter, increasing noise. By securing the cloth to the aluminum plate, which extends back about a foot, the air doesn’t travel over unsecured cloth until it has settled. The cloth seats in the GS we first drove were excellent. Instead of springs and padding, the new seats use a webbing to support your back. It not only saves weight, it also provides excellent support, with journalists large and small remarking how it seemed the seat was made just for them.

The close seats also allow your back to breathe. Our shirts were dry when we arrived at the lunch stop, but were drenched when we got back to the hotel: the leather seats do not allow for moisture escape.

Depending on your perspective, there’s either no cost to upgrade to the six-speed Skyactiv automatic or there’s no discount for sticking with the stick.

Is the MX-5 perfect? No. Some of that is by design, however. For example, to get the car to be this small and this light, cargo space had to suffer. In other words, a golfer has room for either a passenger or his golf clubs but not both. As well, hidden behind that sleek dash is the complete absence of a dash-mounted glove box. There are, however, storage bins between the seatbacks and in the rear wall.

More bad news with MX-5 is it’s now more expensive, about $2,400 more at its base price of $31,900. Much of that is due to a boost in standard equipment, from Bluetooth telephone and audio streaming to LED headlights, automatic leveling headlights, USB port, push-button start and a six-speed manual transmission (last year’s base model was a five-speed).

The MX-5 goes on sale toward the end of June. Kelly Taylor
Kelly Taylor has been writing about cars since 2000. His favourite ride has been the Audi R8 from Thunder Bay to Winnipeg, where he nearly traded the car for a Ford Ranger, a Greyhound Bus and the Blue Heron Gift Store in Kenora, Ont.
FILED UNDER:
New CarsCar ReviewsConvertible ReviewsCoupe ReviewsMazdaMazda ReviewsMazda Miata MX-5 ReviewsMazda MX-5 Miata

Turbocharged power returns to the Mazda3 lineup for 2021 - the first time since 2013 the company has offered a turbo engine in its entry-level 4-door model.
Read more
Porsche 911

Porsche has just released the eighth generation of its venerable 911. We put the 443-horsepower 2020 Porsche Carrera S Cabriolet to the test - in winter.
Read more
Mazda

For 2018, Jaguar has pushed the F-Type performance envelope into the stratosphere by unleashing the 575-hp F-Type SVR.
Read more
Mazda

Fuel-sipping subcompact crossover, the stylish 2019 Mazda CX-9 makes a strong case against buying a hybrid. But does this small SUV have ample gusto under the hood?
Read more
Mercedes-Benz