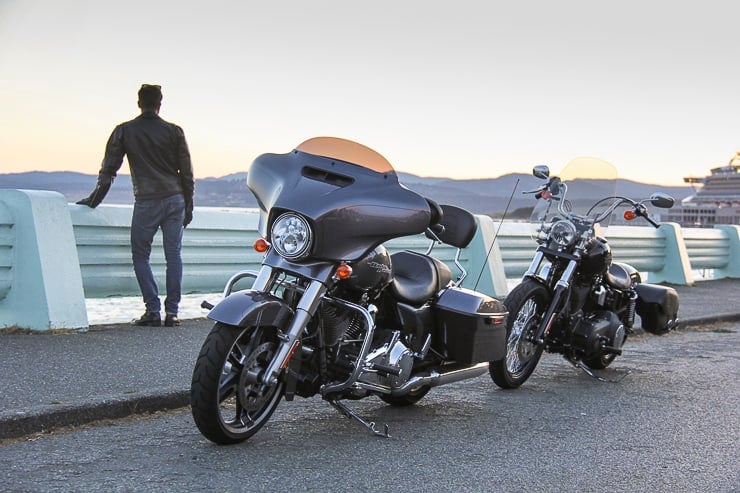 Vancouver Island is the perfect place for a relaxing getaway. Writer Dustin Woods and friend hop on a couple Harley-Davidson hogs to explore. At a time when most of my friends have been forced to sell their motorcycles in order to finance engagement rings, baby strollers or patio furniture (I’m looking at you James Loewen), my friend Grant is among my only contemporaries with the dedication and testicular fortitude to continue riding. Not only did he teach me how to play Wonderwall on the acoustic guitar when we were in the eighth grade, he also introduced me to the movie Easy Rider at the impressionable age of 13 which has stuck with me to this day.

A definitive film that explores the rise and fall of the hippy movement and encapsulates the counter culture of the 1960’s, it has become something of a cinematic bible for the motorcyclist community. I will admit that I found the concluding sequences rather traumatizing at the time and it took me years to understand the true depth of the political statements being made, however I was immediately hooked – mesmerized by the artistic cinematographic style, enchanted by the musical score and utterly infatuated with the romance of escaping to the open road on two wheels.

Grant and I have long talked about setting out on a similar adventure together, but work schedules, mortgages, girlfriends and various other life obligations never allowed it until this summer when we both decided that we were in dire need of a vacation. Both working in fast-paced, high pressure and high stress jobs, we were in search of balance, relaxation and perspective, rather than ill-gotten riches, narcotics or houses of ill repute.

Whenever I’m arranging a trip, I do my best to incorporate an item on my bucket list that requires crossing off. Rather than head to a place like Las Vegas or down to Nawlins to find ourselves a couple Mardi Gras Queens, we decided to visit the opposite end of the spectrum by exploring sleepy Vancouver Island to bask in the epic scenery and try our hand at surfing in Tofino. Grant rips around Vancouver on a nimble little British cafe racer these days but we didn’t feel that it would best suit the distances we’d be travelling over the course of a week-long excursion. Favouring function over the form of two wildly uncomfortable choppers like Captain America and Billy, we arranged a couple brand new Hogs from Trev Deeley Harley-Davidson in Richmond. Unaccustomed to the larger stature of a V-Twin bagger, Grant opted to ride a Street Bob with optional soft saddle bags and removable windscreen, while I chose the perennially best-selling Street Glide that featured upgraded highway pegs and heated hand grips, both of which came in handy.

Grant was initially skeptical about the Hog; at the first traffic lights we stopped at he lifted his visor and inquired in all seriousness, “Is it supposed to be vibrating like this?” I laughed, assuring him all was normal and that the 103 C.I. V-Twin would simply take some getting used to after years of riding a smaller displacement parallel twin. After months of planning and anticipation, the trip officially kicked off once the bikes were safely stowed aboard the Spirit of British Columbia at the BC Ferry terminal in Tsawwassen en route to Swartz Bay. Rather than being turned away by proprietors of seedy motels and forced to sleep on the hard ground outdoors, we were welcomed with open arms and treated like royalty at luxury establishments in Victoria like the Parkside Hotel and quality restaurants like 10 Acres. All of their meat and organic produce is sourced from a local plot of land they farm which consists of, you guessed it, ten acres. Menu items are accentuated and paired with local wines and craft beers, of which there are many quality options to choose from in the area. After an incredible meal, we walked over to Big Bad Johns to experience Victoria’s casual nightlife. The best way to explain BBJ is merely to convey that there are peanut shells on the floor and bras on the ceiling. Enough said.

Grant opted to ride a Street Bob with optional soft saddle bags and removable windscreen, while I chose the perennially best-selling Street Glide that featured upgraded highway pegs and heated hand grips, both of which came in handy.

After touring around Dallas Road and having an amazing breakfast at Willies Bakery, we set off to the west side of the island to explore the Sooke Potholes, cooling off in one of the many refreshing glacier-fed watering holes – although without the company of cute, naked hippie chicks unfortunately. The skies then opened up for the first of many times over the course of the week. Vancouver Island’s temperate climate that is free from humidity makes it perfect for touring comfortably with full riding gear, but make sure you pack quality wet weather attire no matter what time of year you visit, you’ll need it. Visibility was limited as we crossed the Malahat en route to Parksville in the pouring rain which was disappointing since the steep cliffs and dense forests create an incredible view on a clear day. Thankfully once we arrived at The Beach Club Resort the bikes could dry off in the underground parking lot and we could thaw out in our expansive rooms that featured all of the comforts of home and then some.  My condo in Toronto doesn’t happen to have a king-sized bed, fireplace or the spectacular ocean view.
CONTINUED…