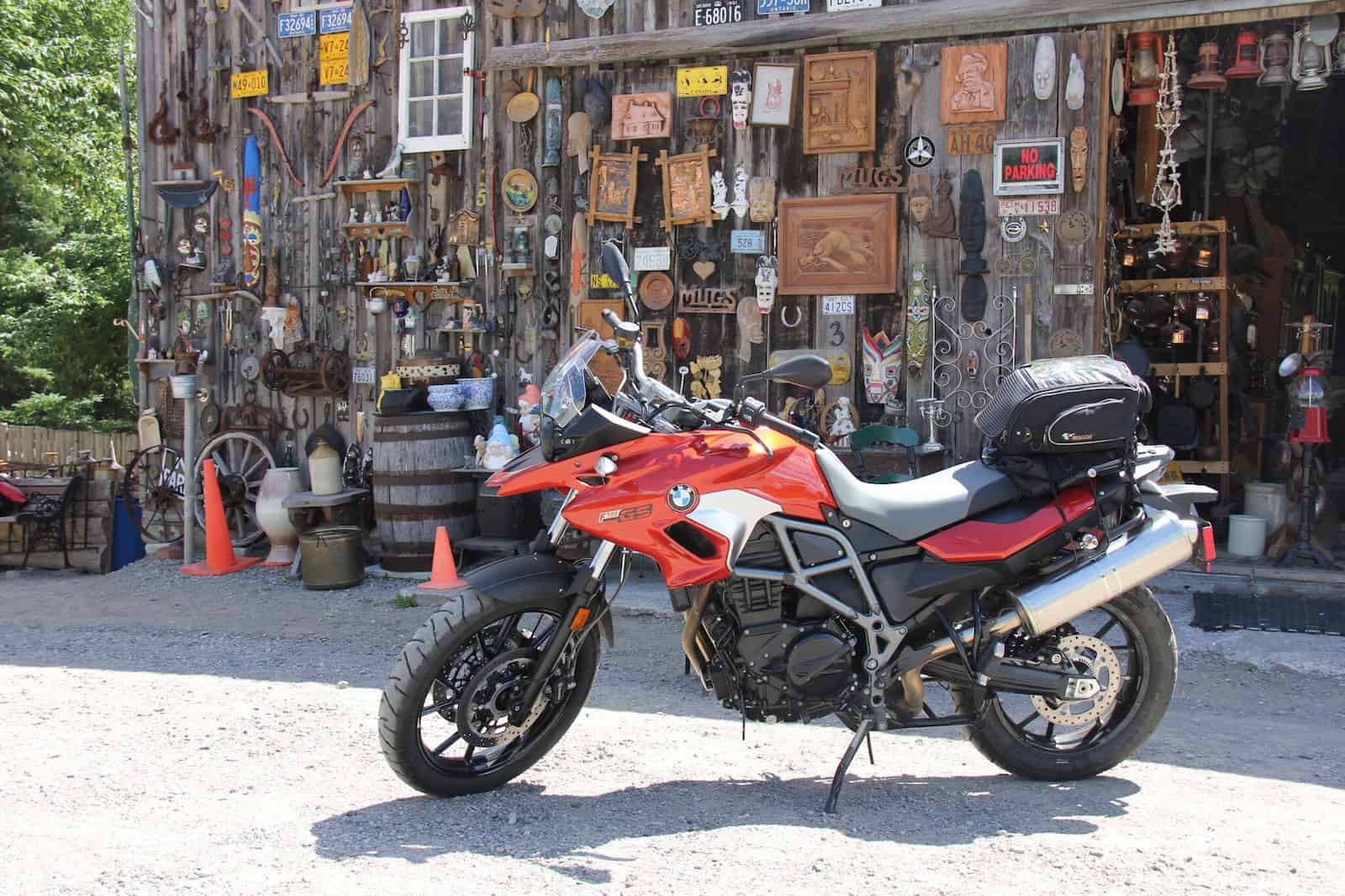 During a recent discussion with a friend and fellow rider about where we should embark on our next motorcycle excursion, I suggested we explore the roads in and around Calabogie. Kanishka is always up for an adventure, so it didn’t take much to convince him with the promise of smooth roads free of streetlights and traffic. We’d driven the area in a pickup truck en route to take in the Kawasaki Ninja Experience at Calabogie Motorsports Park, but that’s not the same thing. Given the fact that we both had adventure bikes booked that week was an omen that we should explore more than just the asphalt and venture off the beaten path. Kanishka on a Honda VFR1200X and myself on a BMW F700GS, we left Toronto at first light on Saturday morning, delayed by a severe thunderstorm warning on Friday evening. We’re not made of sugar and are both accustomed to riding in the rain, but there’s no need to be unsafe or uncomfortable if you don’t have to be. The distance of the Highlands area seems to be prohibitive to some people, but it’s not far from major cities and well worth the ride for even one night. We stopped in at Royal Distributing to pick up some new rain gear (always better to have it and not need it…) before making our way north to Highway 7 and across rather than spend another minute on the boring and blustery 401. Both certified car nuts, we enjoyed taking our time and stopping at the various classic car dealerships along the way as well as The Oldest Barn in Town, an eclectic antique shop owned by a friendly retired gentleman and motorcycle enthusiast named Tim. Taking time to show us around the grounds and pick out unique pieces from his collection, he then took us out behind the barn to show us his custom super sport Suzuki. “My heart doesn’t work so good anymore but my right hand doesn’t know it, so it’s safer not to ride right now,” he said with disappointment, before adding, “This bike doesn’t no how to go slow.”

The BMW F700GS on the other hand is quite comfortable any every speed. Smooth, serene, comfortable and well-equipped, it’s highly engineered from quality materials and features well sorted ergonomics, in addition to little things like a clock and a gas gauge which seem to be absent from many bikes but are always appreciated. Stopping into a gas station to top up our tanks, we got to chatting with a couple fellow riders who were coming from the direction we were headed. Avid riders who have been living in the Calabogie area for nearly 40 years, neither Dave or Tim have gotten bored of exploring the roads in the area. “The roads are perfect for our sportbikes, but there are also tons of trails for our quads and sleds. It’s one of the reasons we live here.”

Given the fact that we were on adventure bikes capable of tackling the twisties but also getting dirty off the beaten path, we decided to explore some of the many gravel roads where you wouldn’t want to take most street bikes.

The best journeys: Go with the flow

Without really mapping out our route aside from reaching Calabogie Peaks Resort for dinner, drinks and slumber, we took many detours. Any time we’d come across an interesting looking trail, we’d slow down and motion at the other as if to say, “What do you think?” which was consistently met with a shrug and a response of “Why not?” Fitted with street tires, we weren’t well suited to take on the deep gravel and dirt, but there were plenty of hard packed snowmobile trails and gravel roads worthy of exploring. Popping out on the asphalt from time to time and stopping for food or water, we made our way to the Calabogie Peaks as the sun set. After checking into the impressive rooms and washing off all the dirt and dust accumulated from the day, we met downstairs at the Canthooks Restaurant. With no need to ride anywhere we partook in sampling some of the local craft beers, including one from the newly established Calabogie Brewing Company. The food was great and the staff were friendly and full of excellent recommendations, so you can’t ask for much more than that! There’s also the Boathouse Bar & Grill down by the water during the day.

Up and at it bright and early once again, we figured that if our strategy for the day before worked, why not do it again. After all, if it isn’t broken, why fix it? Balancing a mix of smooth roads connecting quaint small towns you’ve likely never heard of with gravel trails, we came upon spectacular vistas, lakes and streams that we otherwise would never have come upon had we simply followed a GPS.

While I never thought to wonder whether my recommendation would be well received considering how much fun we had, the next day I got a text message from Kanishka simply saying, “When can we go back?” Dustin Woods
For the better part of a decade Dustin has been contributing automotive, motorcycle, travel and lifestyle content to the likes of The Toronto Star, Robb Report, Motorcycle Mojo, Sun Media, Motorcycle.com, Moto123.com, Inside Motorcycles, HOG magazine, BMW Motorcycle Magazine, Modified Luxury & Exotics and Performance Auto & Sound. His passion for adventure and love of speed has taken him on a journey not for the faint of heart.
FILED UNDER:
BMWMotorcyclesBMW MotorcyclesCultureCulture FeaturesHonda

COVID-19 pandemic may be halting progress but research & development on the Mustang Mach-E must go on. Here's how 3 Ford engineers are doing it - from home.
Read more
Motorcycles

The cruiser market offers a number of choices with builders turning out new renditions of the staple motorcycles. For beginners, here are 5 best options.
Read more
BMW

Bottpower’s track-tested XR-1 is a welcome spin on the Buell XB12 streetfighter, available as a customizable kit in whole or in specific parts.
Read more
Honda

The Latest BMW Bicycles at the Vancouver Bike Show