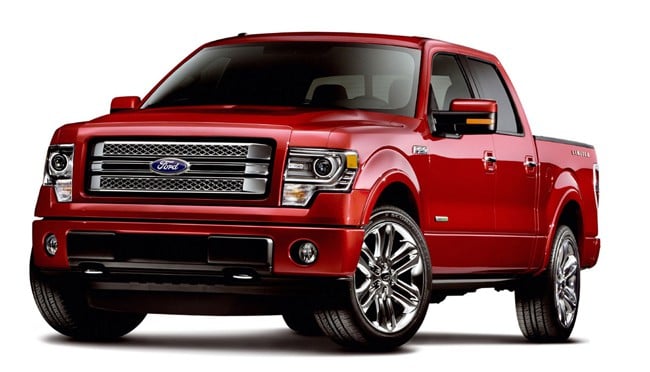 We head to Drumheller, Alberta to review the 2013 Ford F-150 Limited – the new standard in luxury Drumheller, AB –The Ford F-150 has been the best-selling pickup truck in the United States for the past 36 years, and in Canada, the company’s venerable half-ton pickup has been a sales leader for no less than 47 years.

At present, Ford offers 14 different models of the 2013 Ford F-150 ranging from a two-wheel-drive, regular-cab work truck that can be had for a tick under $20,000 to the newly introduced, and very luxurious Limited model which starts at $64,799.

Apparently customers were asking for the ultimate truck.  Ford already offered premium trim levels ranging from the popular Lariat, King Ranch and upmarket Platinum models, but Ford’s marketing and development team knew that there was still room for more.

The Limited has been added to the catalog in an effort to help Ford capture a very niche group of customers-those looking for a truck that offers superior levels of performance and unforeseen levels of luxury and comfort. There will be 1500 Limited F-150s available for 2013, but after the first run Ford will be more than happy to make as many units as they can sell. The company expects that this new model will steal a few customers away from the Platinum and King Ranch trim-lines, but most purchasers are expected to come from competing brands.

The 2013 Ford F-150 Limited only comes in a Super Crew cab configuration fitted with a five and a  half foot cargo box. If you really feel the need to have a six and a half foot bed you will have to take the short step down to the Platinum model. The Limited has much less chrome than its Platinum counterpart and its monochrome paint treatment sets it apart from lesser rides and gives it a very custom look. There are three colours available – White Platinum Metallic Tri-coat, Tuxedo Black Metallic, and Ruby Red Metallic.

The Ford Motor Company made some minor revisions to the exterior design of the F-150 for 2013 including the addition of wraparound tail lamps to improve safety and visibility. The Limited model sports new High-Intensity Discharge (HID) headlamps which apparently deliver two and a half times more light than conventional halogen lamps, but I should point out that they are non-active.

The 2013 Ford F-150 Limited features a new three-bar  grille treatment derived from the Super Duty line of pickups. This very bold and muscular styling is very appealing to truck customers.

The truck features a lower stance and rides on 22-inch wheels wrapped in performance rubber which will help the driver get the most from the sport tuned suspension.

As the Limited only comes in four-wheel-drive form it can still be quite the task just to haul yourself up into the cabin. As a result, the truck has been fitted with power deployable running boards as standard equipment. The Limited also comes fitted with Ford’s innovative tailgate step and handle.

One look inside the cabin of the F-150 Limited reveals that you are looking at something pretty special. The Limited has a distinctive interior featuring brick red, full-grain leather-trimmed seats that are on par with those found in more traditional high-end luxury vehicles. The seats also offer cooling and heating with memory functionality to remember seating preferences for two different drivers. Head restraints are four-way-adjustable and second-row seats are heated, too.

Unique glass “Limited” badges are set into the seatbacks, and there is a serialized plate mounted to the centre console lid. Stylish piano black and aluminum trim pieces are another highlight of the design. It was decided that the Limited package would only be offered with one equipment group to make it simple for dealers and customers alike, and very few options would be available. In fact, beyond selecting to add an optional bed extender or liner, the only real options are the choice of colour or choosing to replace the EcoBoost V6 with the venerable 6.2-litre V8.

The list of standard equipment on this rig is long and includes such features as power operated adjustable pedals, a power operated steering column, and power operated front seats. The Limited features a moon roof as well as a power-sliding rear window,  a rear view camera system and voice-activated navigation.

Although many will think this truck is too pretty to be put to work the truth is that a lot of people use these vehicles as mobile offices. As a result the Limited features an unsurpassed level of connectivity using Ford’s MyFord Touch powered by the Microsoft- engineered SYNC system to help create a very productive environment. The Limited features an 8-inch touch screen that allows you to control the premium Sony entertainment system as well as your cellular telephone, navigation and climate control systems. The personal safety of all occupants is paramount, so the F-150 Limited features a full complement of advanced airbags including dual stage front units as well as rear outboard and curtain airbags. Electronic nannies such as AdvanceTrac with Roll Stability Control and Trailer Sway Control are on board to help the driver maintain control when the going gets tough. Rear parking sensors and over-sized, power fold, side mirrors will complement the reverse camera system when backing up.

Ford’s MyKey system allows customers to program in safety features to either manage the operation of their fleet vehicles or help monitor the safe operation of the vehicle by both younger and less experienced drivers. For example you can program in speed limits, speed chimes, seat belt notices, or even mute the audio system if the driver’s seatbelt is not fastened.

Under the hood you will find the 3.5-litre EcoBoost engine which produces a healthy 365 hp and 420 ft-lbs of torque. Acceleration is brisk, linear, and best in class, as 90% of maximum torque is delivered at a very low 1,700 RPM. The engine features a very flat torque curve (which rises to 5,000 RPM) and along with its smooth shifting, six-speed, automatic transmission helps make short work of hills, even while pulling a trailer. This rather remarkable engine is quiet, powerful, and very efficient due to its use of advanced twin-turbo technology and direct injection.

The EcoBoost engine is proving a runaway success with Canadian light-truck buyers as itdelivers V8 performance with V6 fuel economy due to its clever design and engineering. Last year 41% of F-150s were ordered fitted with the EcoBoost engine. This represents almost 500,000 trucks.

The EcoBoost engine was developed when the folks at Ford recognized that consumers are looking to save money at the pump. Ford’s engineers sought to downsize the engine but improve on performance, durability and reliability with better fuel economy. The goal was also to improve towing capacity as the typical truck buyer tends to be a customer who may need to tow a trailer from time to time. Ford embarked on a very rigid test program in an effort to prove to potential customers that the smaller EcoBoost V6 engine would be more than capable of handling  anything that the consumer could throw at. The goal was to alleviate the sense of nervousness that might be felt by those customers who were considering downsizing from a V8 engine for the first time.

Interestingly the decision was made to allow Canadian buyers to have the option of ordering the Limited fitted with Ford’s 6.2-litre V8 engine. It seems that many of the brand’s Canuck buyers hold a fondness in their heart for the heritage of the big V8, as well as its distinctive growl.

Ford stands alone as the undisputed leader when it comes to truck sales largely due to the fact that the company set a goal to have a truck fit for every buyer. Through a program of continuous improvement the company has selected to add a new crown jewel to the lineup for model year 2013, that being the F-150 Limited. The big question is, how many people will see the value in a near $70,000 half-ton pickup truck. Don’t get me wrong, as the Limited is a very nice vehicle, but in my humble opinion, does the brand really need another opulent truck?

Russell Purcellhttps://www.flickr.com/people/autoexposurecanada/
Russell Purcell is an award-winning automotive journalist and photographer based in Vancouver, B.C. His passion for automobiles was sparked at the tender age of six, when a family friend gave the wide-eyed first grader a ride to school in a track prepared Porsche 911 RSR. He continues to fan the flames by building an impressive library of automotive related books as well as a vast collection of interesting automobilia and motoring artefacts. Russell is a member of the Automobile Journalists Association of Canada, and is active on Twitter as RoadTestRuss.
FILED UNDER:
Full-size TrucksFord F-150 Reviews & News