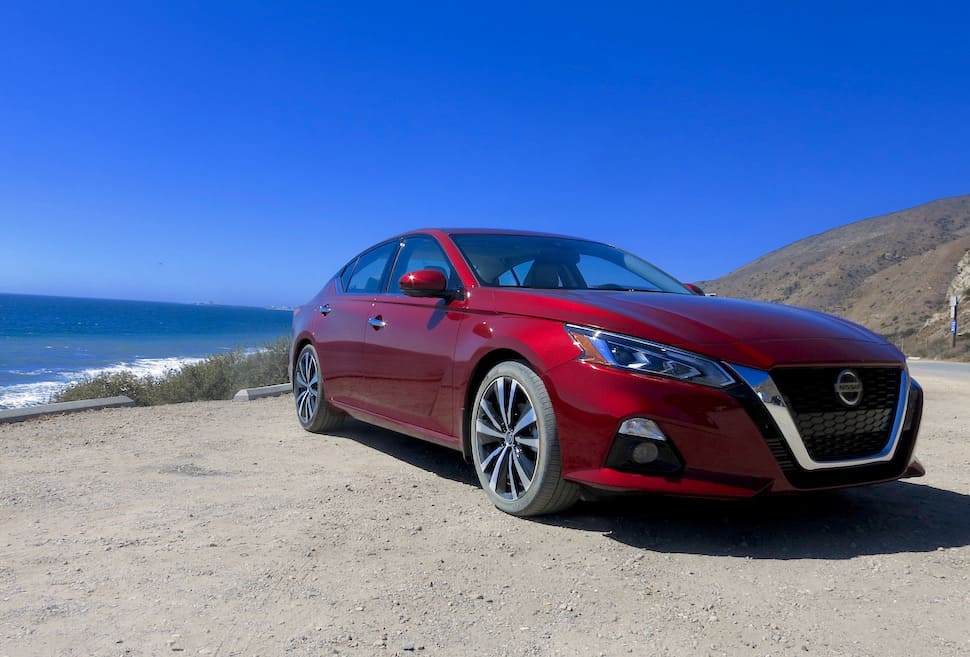 SANTA BARBARA, Calif. — Not only is Nissan thumbing its nose at the so-called demise of the sedan, it’s doubling down with a new platform for the 2019 Altima it says is the most expensive it’s ever done.

In Canada, the news around the Altima is even more interesting, with all-wheel drive as standard equipment, a clear shot at Subaru, which has staked out a sizeable chunk of the Canadian market with a lineup of vehicles almost exclusively equipped with all-wheel drive, including the new 2018 Impreza and Subaru Legacy, review here.

It’s a strong entrant in the all-wheel-drive sedan market, as well, with a stylish new design and snazzy interior that wouldn’t be out of place in Nissan’s luxury brand, Infiniti.

The all-wheel push is unique to Canada, as the American market will get a choice of front- and all-wheel drive.

Under the hood: Altima’s 182-hp powerplant

What Canada won’t get, however, is the 248-horsepower 2.0-litre high-output variable compression turbo engine. Nissan Canada has chosen to go with one engine only, a 2.5-litre, non-turbo, four-cylinder mill. In the U.S., the 2.5 is also the only choice available with all-wheel drive.

That engine’s 182 horsepower and 178 pound-feet of torque will be more than adequate for most buyers, as it pairs nicely with the continuously variable transmission, a gearbox once worthy of hatred but which is now, at least in the latest Nissan/Infiniti vehicles, quite well-done. It simulates the feel of an automatic but still offers the fuel efficiency benefits of CVTs.

For smaller engines, the CVT arguably works better than many seven, eight, nine and 10-speed automatics, which in many applications seem to hunt too much for the right ratio when paired with less-torquey engines.

Also entering the lineup at a lower and lower price point is the ProPilot Assist semi-autonomous driving aid, which is one of the better ones in the market. That arrives as early as the SV trim level, only one step above the base S model. Canadians will also appreciate the standard remote engine start and standard heated seats. Platinum models, which feature Intelligent Climate Control (basically, automatic HVAC), will also automatically pre-heat or pre-cool the car when the remote start is activated. Drivers without Intelligent Climate Control can accomplish a similar objective by leaving the car set to the desired temperature when parking.

The list of standard equipment is impressive, but it’s also reflected in the price, which starts at C$27,998. All models include: automatic emergency braking, driver alertness warning, rear door alert, rear view monitor, eight-way power driver’s seat, 60/40 folding rear seat, Apple Car Play and Android Auto, seven-inch display between the tach and speedo, four USB ports (including USB-C) and heated outside mirrors. A large touchscreen display  above the centre console controls audio, connectivity and, if equipped, navigation functions. It also includes actual volume and tuning knobs. That the most-used functions are brought out to actual buttons and switches is also something drivers will appreciate.

For the new model, Nissan has incorporated a number of changes that are immediately apparent when driving: first, engineers reduced longitudinal chassis stiffness (meaning from front to back) by 15 per cent to make bumps less apparent, while increasing side-to-side stiffness by 10 per cent to improve cornering.

On the twisty roads near Los Angeles, including the delightful Kanan Dume Road, the grip was impressive yet the ride was supple.

Nissan has also improved what it calls Zero Gravity Seats, apparently inspired by NASA, with more side bolstering for better support in spirited driving. For our combined four hours in the car, they were comfortable.

Nissan’s senior vice-president, R&D Americas, Takeshi Yamaguchi, joined us for dinner after our drive and pressed us for areas for improvement. It wasn’t easy, but he listened to a couple of my suggestions, which included using the rear sonar sensors to detect whether the car is in a closed garage and thus disable the remote start, as well as sensing whether to turn the seat heaters on when the remote start is used during cold weather.

Yamaguchi said the technology is already on board the car for both ideas, and suggested they would be easy to implement. Nissan’s Safety Shield 360, which arrives at SV trims and higher, adds pedestrian detection to the automatic emergency braking, as well as high-beam assist, rear automatic braking, lane departure warning, blind spot warning and rear cross traffic alert. Which is in addition to ProPilot Assist, which uses radar cruise control and lane centring technology to assist drivers in staying centred in the lane, even during turns, and maintaining a consistent gap with a vehicle ahead, even as that vehicle changes speed.

ProPilot works better than some systems, which feel as though you’re bouncing off the lane markings. It seems to get fooled from time to time when an exit lane opens and tries to steer toward it, but it takes very little pressure on the steering wheel to defeat that tendency, however. ProPilot also will not let drivers leave their hands off the steering wheel for long, with a series of increasingly obvious warnings that culminate in the car coming to a stop if those warnings go unheeded.

For those seeking a bit of exclusivity, at launch, Nissan is offering the Edition One, which adds unique 19-inch wheels, Edition One floor mats, spoiler, external ground lighting, illuminated kick plates and Edition One badge. Only 250 will be available in Canada.

To learn more check out Altima US | Altima Canada

Kelly Taylor
Kelly Taylor has been writing about cars since 2000. His favourite ride has been the Audi R8 from Thunder Bay to Winnipeg, where he nearly traded the car for a Ford Ranger, a Greyhound Bus and the Blue Heron Gift Store in Kenora, Ont.
FILED UNDER:
Mid-Size SedansNissan Altima Reviews & News