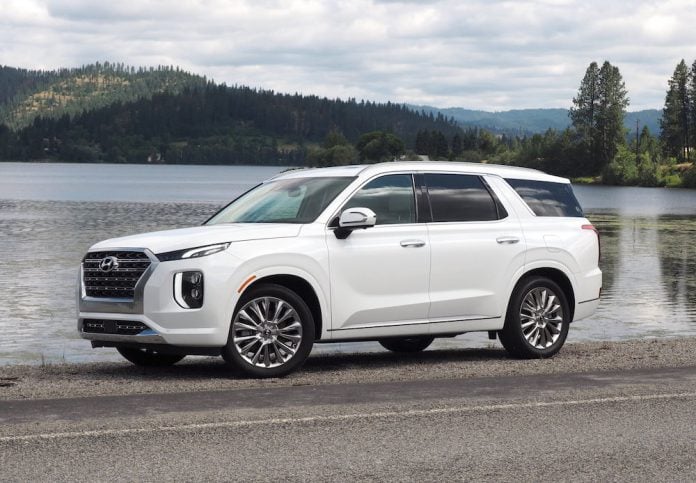 Coeur d’Alene, ID – Remember the Pony? You have to be of a certain age to remember Hyundai’s inauspicious entry into the North American market three decades ago with its primitive hatchback.

Yet, since then, Korea’s dominant automaker has consistently raised the bar with the determination of a salmon swimming upstream to spawn. And, now, the near-full-size Palisade SUV has moved the bar again.

The Palisade, and its twin the Kia Telluride reviewed here, step into a busy and competitive category: going head-to-head with the likes of Chevrolet Traverse, Ford Explorer, Honda Pilot, Nissan Pathfinder, Subaru Ascent, and Toyota Highlander. The Palisade one-ups virtually all of them.

The Palisade replaces – actually outgrows – the company’s previous big SUV, the mid-sized Santa Fe XL. It is 7.6 cm longer, nine cm wider, six cm taller, and with a 10 cm-longer wheelbase. It also represents a great leap forward in SUV luxury and refinement for the Korean automaker – advancements that put it right into the hunt with its competition.

With a slightly boxy exterior, it is the interior that is the star of this show. The features, big and small, include: 16 cup holders spread over three rows of seats, seven USB ports (curiously none USB C), wireless charging and individual rear-seat climate control. The rear speakers can be switched off quickly with a one-button quiet mode, and the Driver Talk in-car intercom system amplifies the driver’s voice through the audio system to reach kids kids in the third row.

Seating is second only to FCA’s high-end Pacificas for convenience. The rear bench is power-folding. Mid-row seats can be dropped from the back with a touch of a button, or total capacity can be dropped to seven if you choose second-row ventilated captain’s chairs.

Controls up front are clean and easy to use. A push-button gear changer eliminates the traditional shift lever, opening up room in the front. The use of quality materials adds to the near-luxury feel. The centre console features a 26-cm touchscreen multimedia panel, and the 31-cm gauge display is digital on higher trim levels. Head-up display is available as an option.

Under the hood, the Palisade is powered by its proven 3.8-litre V-6 engine, making 291 horsepower and 262 pounds-feet of torque. Hyundai claims it has the most horsepower of any three-row SUV in its class. Paired with a smooth-as-silk eight-speed automatic, it can tow up to 2,000 kilograms – the equivalent of a big trailer or a mid-sized boat.

The use of Atkinson cycle and stop/start technology enable the Palisade to deliver a real-world fuel economy of 11 litres/100 km driving hilly, twisty roads in the forests near Coeur d’Alene, Idaho, where the automaker revealed the Palisade to journalists.

All-wheel drive, of course, is standard in all but the base model.

Outside, the Palisade’s sharp contours and squared-off shape represent a styling departure for the brand. If you favour a conservative look, you might find it subdued and dignified; others might find it a bit boxy.

The Palisade incorporates advanced safety systems, including forward collision warning, automatic emergency braking with pedestrian detection, blind spot warning, and rear cross traffic warning with automatic braking. It also has Hyundai’s Safe Exit Assist, which uses radar to detect cars approaching from the rear, keeping the doors from being opened until the car has passed.

Hyundai uses a lot of high-strength steel in this vehicle, which saves on weight while giving the chassis greater stiffness. For the driver, the elimination of body flex makes it feel very sure-footed during manoeuvres.

It also has available driver assist technology, including adaptive cruise control and lane-keep assist. A novel innovation is a camera on higher end models that provides an image of the side of the vehicle when you signal a lane change.

The Palisade combines convenience and safety features, generous interior space, ample power and respectable fuel economy. It joins its twin – the Kia Telluride – which is built on the same chassis and uses the same powertrain, although it is manufactured in the U.S. (while the Palisade is built in Korea).

I’ve driven the Telluride, and found the driving dynamics to be virtually identical to the Palisade. For consumers, choosing between the two will be a matter of personal preference on features and styling details. The vehicles are not as cheap at that old Pony, but they are so vastly superior, it’s hard to believe they come from the same company. And they provide great value for the features offered.

The Palisade is to be in dealerships this summer. Hit up this page for more of our 2020 SUV reviews.

Doug Firby
I am a communications generalist with more than four decades of experience in online, blogging, newspapers, radio and magazines. I'm also a gearhead and an outdoor enthusiast. I write on cars, trucks, bikes and the auto industry for national publications. And I am president and publisher of Troy Media Digital Solutions.
FILED UNDER:
SUV and Crossover Reviews2020 SUV and Crossover ReviewsFeaturedHyundaiCar ReviewsHyundai Reviews

The 2020 Toyota Highlander interior is completely new, part of the mid-size SUV's 4th-generation redesign. But how different is it, really?
Read more
Man Cave Ideas