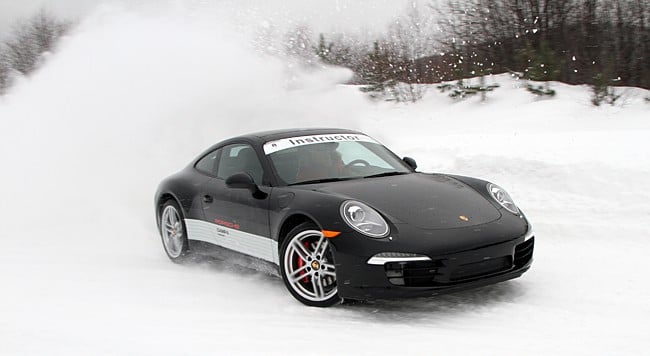 Porsche Camp4 Canada 2012 is all about the winter

Winter is usually the season when automotive enthusiasts work on their cars to prepare them for spring and summer motoring, but Porsche wants to change that, and convince the owners of its venerable sports cars that they are as much fun to play with in the snow as they are on the pavement.

What is Porsche Camp4?

The concept of Porsche’s Camp4 can trace its roots back 16 years to the chilly nation of Finland, where a group of curious  Porsche owners assembled to test the cold weather capabilities of their precious machines. The event proved a  resounding success, and Camp4 was born. The name Camp4 is derived from Carrera4, the all-wheel-drive variant of the 911 which first was first introduced to the public in the winter school setting. Porsche continues to operate Camp4 Finland and it now hosts as many as 1,500 students each year. Last year a second Camp4 took shape at a little known motor sport facility (Mecaglisse) in Notre-Dame de la Merci. Tucked into the wilderness just north of Montreal, Mecaglisse is comprised of two purpose built tracks and a large pair of icy skid pads. Loosely modelled after the Finland effort  Camp4 Canada will help 180 lucky customers discover how much fun you can have while exploring the inherent instability of winter driving in a high-performance automobile.

Upon arrival at Mecaglisse your eyes are not drawn to the Porsche flags rippling in the air, or the sinuous ice-capped track slinking through the trees. Instead, your gaze is captured by the three rows of Porsche automobiles lined up in echelon formation in the chilly paddock.

Porsche Camp4 Canada maintains a fleet of 30 student cars that have been equipped with high-performance Nokian winter tires festooned with 1.5mm studs. These special shoes help the cars find the elusive traction needed to put power to the ground, which just so happens to be capped with a slippery mix of ice and snow. The fleet assembled for this year’s Camp4  included the Porsche 997 Carrera4 GTS Cabriolet, the Cayman S, and the star of the show, the all new 2012 Porsche 991 Carrera S. All cars were fitted with Porsche’s lightning quick PDK automatic transmission so that the drivers are free to focus on mastering their steering and pedal inputs rather than worrying about manual gear selection and clutch operation.

The day begins with a brief classroom lecture where students are introduced to the Camp4 curriculum. The students are reminded of the basic elements of vehicle dynamics, including the principles of over-steer and under-steer, and how the physics change when travelling over snow and ice. The basic elements of proper car control are also examined including the importance of driver vision as well as when to apply driver inputs such as braking, steering, and acceleration.

A quick overview of the facility, track configurations and schedule of events is followed by a quick tutorial regarding the operation of the car’s traction and stability control systems.

The goal is to equip the guests with the necessary knowledge and skill set to better handle a car on icy roads, a process that can only be honed through hands-on training behind the wheel in the relative safety of a controlled environment. The 30 students are then divided into three teams, and each group is assigned an instructor and a spotter. Once paired up with a driving partner you are escorted to the paddock and assigned a car.

The schedule divides the day into three activities, each designed to introduce students to the outer limits of traction and control in an effort to help them recognize the moment when traction is lost. Through instruction and behind the wheel practice the students are taught what steps to take to regain control, and what inputs they can make to keep the car progressing safely forward rather than off the road.

These skills should help drivers become more confident in their winter driving skills. More experienced drivers can sign-up to attend Camp4S, a more advanced course which is also offered at the Mecaglisse facility where speed and technical difficulty are increased accordingly.

My first activity found me behind the wheel of the all-new 991 doing my best to learn how to drift the slinky, white beast through the technical corners of a high-speed, snow-covered track. The new car has a longer wheelbase, a significantly lower suspension, and a wider track. These technical changes have given the new car an enhanced level of stability which helps inspire confidence in the car’s lucky driver.

The Camp4 cars all come fitted with high-performance, studded, winter tires to prevent slippage, but it is nice to know that should you get too far over your head the fluffy snow banks will cushion the impact and save the car’s precious bodywork from any major damage. This allowed me to push myself a little outside my comfort zone so that I could experience the exact point where traction is lost and then employ my new found skills to regain control of the car. I never found the perfect balance required to maintain my speed over a complete lap, but with a little more practice I am sure it would come. Participants receive constant instruction from the instructors via radio, but I also benefited from coaching from my more experienced driving partner.

The wider torque curve of the 991 made it easy to plow through deeper snow when my lines became a little wide and the much improved braking system ensured I was able to draw in the reins when my enthusiasm outmatched my driving abilities.

The all new electric power steering provided just enough assistance to reduce the amount of effort required by the driver, but at no time did I feel any substantial loss of feel. In fact, it seems to enhance the level of steering precision.

The new car’s sport bucket seats seemed infinitely adjustable, and did an excellent job of holding me in place.

The second event of the day found me behind the wheel of Porsche’s handling dynamo the Cayman S. The goal was to tackle an oval-shaped track which featured several elevation changes, blind corners, and a tight slalom. The mid-engine design of the Cayman gives it a balance that translates into predictable handling on a dry stretch of asphalt, but on an undulating surface of ice and snow it took several laps to  reacquire this natural balance.

While dancing on the pedals and working hard to master the art of the controlled drift it became evident that finding the correct line around this technical track was the real challenge. Having a second day to practise at each station would definitely shorten the learning curve.

The final event of the day took place at the skid pad. While drifting looks like a breeze when you see it on television, it proves a challenging task when faced with the irregular surface of a snow-covered skid pad, especially while being pursued by a second car!  The 997 Carrera4 GTS Cabriolet is the weapon of choice for this session, as it features an all-new all-wheel-drive system that is capable of sending up to 100-percent of the car’s power to the front wheels. This allows the students to learn the intricacies of Porsche’s torque vectoring plus system which allows the transfer of power side to side depending on where the system’s sensors detect the most grip, which helps push the car through the corners.

I found this exercise the hardest to master, as maintaining a controlled drift around the full circle proved difficult due to my inability to hold a line tight enough to avoid getting too close to the perimeter wall. This would make me nervous enough to lift off the throttle or over correct my steering and I would end up looping the car. Again, a second day of instruction and practice would probably help me overcome this hurdle.

When, where and how much?

My Camp4 experience was a condensed one, as the media event I attended provided a sampling of the course curriculum over a single day. The standard Camp4 experience is comprised of two days of training and classes are limited to 30 participants. I should also point out that there is a minimum age requirement of 21 years. Unfortunately, Camp4 Canada is closed for the 2012 season, but this just means that you have time to put some money aside to attend during the 2013 edition next February. This year’s two-day Camp4 experience cost $4,995 plus applicable taxes, which seems reasonable when you realize that it includes three nights accommodation (and meals) at the Esterel Suites Spa & Lake Resort, transfers to and from the track, the use of the school cars, and instruction and refreshments at the Mecaglisse facility.

The people who tend to purchase Porsche automobiles are those individuals who like to drive. The truth is that few cars even come close to the handling and performance offered by the German company’s iconic machines.

Camp4 was created to teach Porsche owners how to safely handle their precious automobiles in inclement winter weather conditions. The last place most people would expect to see a high-performance sports car is on a snow and ice covered roadway in the middle of winter, but after spending the day at camp it became immediately apparent that Porsches are so well balanced and engineered that with a proper winter tire, these sporting machines make excellent four season chariots.

If  winter driving makes you nervous consider attending Camp4 next season as you will emerge with a better understanding of what it takes to maintain control of your vehicle when the going gets slippery, and the skills you learn will go a long way in helping you stay safe on the road. It’s also a heck of a lot of fun!

Russell Purcellhttps://www.flickr.com/people/autoexposurecanada/
Russell Purcell is an award-winning automotive journalist and photographer based in Vancouver, B.C. His passion for automobiles was sparked at the tender age of six, when a family friend gave the wide-eyed first grader a ride to school in a track prepared Porsche 911 RSR. He continues to fan the flames by building an impressive library of automotive related books as well as a vast collection of interesting automobilia and motoring artefacts. Russell is a member of the Automobile Journalists Association of Canada, and is active on Twitter as RoadTestRuss.
FILED UNDER:
CultureCulture Features